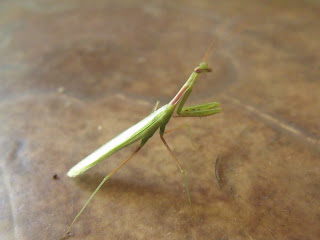 Reports are accumulating about the global ‘insect apocalypse’: catastrophic die-offs of beetles, butterflies, moths and bees, all absolutely vital to ecosystem health and the pollination of both wild flora and domesticated crops. One study targets what should have been blindingly obvious: a large part of the problem is one of humankind’s major civilising achievements – our ability to banish darkness with artificial lighting. Untold trillions of insects have perished beating themselves to premature death, scorched on hot glass, made vulnerable to predators, distracted from mating, nest-building, and breeding. So amongst all the other things to feel crap about, are the exquisite moths  and mayflies and Christmas beetles I find dead on my windowsills, inside and out.

Amongst the trapped and frantic insects I encounter, and sometimes succeed in rescuing, are praying mantises. Whatever its  ecological importance, the mantis is also mythic: to lose them would be to lose the real source of centuries of legend, story, and symbolic richness.

In our region, of course, the most profound and ancient mythic presence comes from the Bushmen or San. Mantis was never the simplistic ‘Hottentot god’ of earlier colonial lore, nor ‘worshipped’ in the manner of a Western god. Rather, Bushman groups generated a complex and unstable set of mythic tales or kukummi centred on the figure of /Kaggen, a volatile creator, the first shaman, a trickster-god who could metamorphose into many creatures, but manifested often as a mantis.  David Lewis-Williams, in San Spirituality, summarises:

/Kaggen’s association with the praying mantis insect has long been a subject of debate. His name can certainly be translated as ‘mantis’. In [the story] ‘The Mantis takes away the Tick’s sheep’, we learn that this transformation, effected by ‘getting feathers’ and flying, is into ‘a little green thing’ ... It is also an insect that, like man, hunts. This notion has led some rock art researchers to look for depictions of mantises. They were disappointed ... It seems that /Kaggen is best thought of as a protean figure capable of numerous manifestations, of which a praying mantis is one. (113)

/Kaggen loved the animals he had created, and apparently enjoyed tricking hunters into losing their intended prey; in one tale, he contrives to save a hartebeest while in the guise of a mantis. This is one of the stories first related by /Xam convicts to the German linguist Wilhelm Bleek in Cape Town in the 1870s. Some were translated into English and re-written, problematically poised between exoticism and accessibility, by Bleek and Lucy Lloyd in a collection titled Mantis and his Friends (1923). This has spawned a string of mimics and refurbishments, often lushly illustrated for children, by Sarah Barber, Marguerite Poland, and Jenny Seed, amongst others.  A number of novels have also drawn on the mantis stories, ranging from Ethelreda Lewis’s Mantis (1926) to Andre Brink’s Praying Mantis (1997).

I’ve been most interested in the series of poets who have been inspired by the gnomic testimonies of the Bleek-Lloyd archive. It perhaps began with Laurens van der Post, one of the earliest to sense the poetic potential of the often enigmatic tales from //Kabbo, Dai!kwain, and other /Xam informants. Van der Post wrote brief story-versions, as well as A Mantis Carol (1989), an avowedly true story in which the mantis appears as a kind of Jungian manifestation of archetypal interconnectedness.  Poet and editor-extraordinaire Jack Cope ‘translated’ some kukummi into poetry in the 1970s, and he has been followed by such prominent poets as Stephen Watson (The Return of the Moon), Alan James (The First Bushman’s Path), and Antjie Krog (The Stars say Tsau!). Krog, often following the line-breaks necessitated by the narrow notebooks used by Bleek and Lucy Lloyd, found a ‘natural’ poetry emerging.

In fact, these transcribers or ‘versioners’ of the Bleek-Lloyd material make little reference to the mantis in their selections. Subsequent mantis-centred poems, throughout the last century, are haunted by the notion of a god-like figure, but it has moved a long way from the /Xam conception; it hardens into something more forbidding, less a trickster than an implacable devil. Terence Heywood, writing in the 1950s, doesn’t really seem to know what to make of ‘Mantis’: it’s just a bundle of strange anatomical attributes:

So much, so bland; awkward observation without resonance. I’m surprised Guy Butler thought the poem good enough to include in his compilation, A Book of South African Verse (1959).  A better inclusion is Eve and Broughton Gingell’s poem ‘Praying Mantis’, introducing the common notion of the mantis as ruthlessly predatory, some kind of avatar of apocalypse:

She kneels and prays
Long searching prayers
And with a whip of silence flicks them
Up to Heaven.
She murders stealthy flies.

There is an unstated equivocation between ‘praying’ and ‘preying’: this inexorable creature’s religiosity is deceptive, a perversion: ‘Her fatal piety/ Has no Amen but Death ... Kneeling remorseless/ At her green and sundry prayers’. Guy and David Butler make this explicit in another anthology, Out of the African Ark (1988).  Their introductory note asserts that the female mantis is sometimes cannibalistic, that the ‘supplicating gesture’ with the forelegs is really a ‘readiness to extend their spikes and hooks with lightning speed to seize unwary insects ... He is a deadly little predator, and should be called the Preying Mantis’.

Almost as an antidote the Butlers include an oft-anthologised, slightly tongue-in-cheek poem by Robert Dederik. Dederik’s ‘Mantis’ is more vulnerable than threatening, what with this humungous human looming over him, putting him into ‘such a zone of worry as may/ Make the least inclined to prayer/ Suddenly inclined to pray’. In a ‘longer view’ – which the poet assumes the insect doesn’t have – man and mantis might be seen as equal ‘effects’ of some ‘primal Cause’. We share our existence and destiny on this planet. Also, those raised, joined hands appear ‘not entirely stranger to’ a ‘thanksgiving mood’. The somewhat contorted syntax doesn’t make clear what the mantis might be grateful for, unless it’s for not being squashed by the human’s ‘whelm of power’.

The Butlers also anthologised the most famous mantis poem of all, by Ruth Miller. Here, too, the triangular relationship between mantis, human and a god is deeply troubled and fraught. Like the Gingells’ mantis, this one initially appears formidable and deathly:

He lifts his small hands
To god of nothingness.
Jagged legs stand
On pale green crutches.
The pear-shaped pod
Flanged for flight
All dainty lines
Except the head:
Except the triangle terrible as death.

The ‘crutches’, the daintiness, strike a note of fragility, but when the poet reaches for the mantis it retaliates; it seems to grow as large as herself, ‘the pointed face/ Filling with knowledgeable malice’, those hands coming and creeping and feeling for her through space. It takes some imagination – and some inner vulnerability – to feel threatened by a creature so small that to it an ‘inch’ seems ‘cosmic’. In the final part of the poem, the poet imagines herself as ‘brittle as a twig’ – as mantis-like – desiccated by time and now trying to be ‘quiet and restrained’; and closes with a question: ‘Would the terrible triangle of my face/ Make him afraid?’

Who is that ‘him’? God? The ‘god of nothingness’ mentioned earlier? The mantis himself? It’s deliberately ambiguous. At the very least the mantis functions as symbolic of a paralyzing fear of death.

Roy Holland’s fine poem, ‘Mantid’ (anthologised in Colin and O-Lan Style’s Mambo Book of Zimbabwean Verse), echoes this notion of the mantis’s implacable air confronting us with our own mortality. The poem begins:

Outside, musty as damp wool scarves,
The dark coiled back on itself
Like life mouldering in a plumstone.

But she was alive there,
Transparent on the window-pane,
Insatiate with her own green light.

At the angles of her head
The bald green eyes looked inward,
Outward, watching the juices

Of divination run through her long flanks,
Her two razors of supplication
Hone themselves on prayer.

That terrific phrase razors of supplication captures the ambivalence of the poet’s responses. This female mantis is munching on ‘the fused wire of her mate’s claw/ Twitching out its voltage in her mouth’. That disturbing cannibalism by a creature with ‘no sense of loss ... appetite merely’, prompts the poet’s grim closing meditation:

Her breath is a green frost; famine her mandibles.
And Time is browsing, mantis-jawed, on the delicate
Distal of my foot. I am digestible.

Also writing from Zimbabwe, N H Brettell finds his mantis equally impenetrable to emotion. In ‘Mantis and Moth’, the poet observes a mantis, the ‘little monster god’, perched on the aerial of his radio set. Through that aerial thrums the sound of Kathleen Ferrier singing Mahler’s tragic Das Lied von der Erde. Does the mantis, the ‘more than self-sufficient hexapod’, its forelegs raised in ‘derisive supplication’, feel anything of that orchestral human yearning and melancholy? Will Ferrier’s soprano, approaching like a soft moth, survive that ‘saw-toothed trap’? No:

It does not shake the mantis,
The aeons of the species’ strict tradition,
Indifferent to the yearning desperation,
Knowing it all, once for all:
He has no need for sweet regretful folly...

All that glorious music, laden with its ‘doomed and perfect voice’, does not move the mantis – nor, implicitly, all of Nature – one jot. The mantis might represent something apocalyptic or final – but only we humans seem to have the capacity to worry about it.

Finally, Harry Owen’s mantis, again caught on a window pane, seems like Brettell’s  to preserve some impenetrable, ultimate and quasi-divine knowledge of our own fate. Like Ruth Miller’s, this poem ends on a question. It is everybody’s question.

Wake me up, mantis, your name the cursive
scrawl of your thorax, lend me your special
wealth, your voracious perspicacity.
You shouldn’t be here on the window glass,
gazing out from this garage’s dusty
gloom to a world of light and greenery.
Are you trapped, lost? Or are you here by choice?
You twist your head and glare at me.
We are alone. What is it I do not know?

******
Thanks to Marike Beyers of Amazwi Museum of Literature for helping me locate mantis material, and to Harry Own for permission to quote his poem in full.


Visit Dan and Jill Wylie’s work at www.netsoka.co.za
Posted by critical diaries at 02:25