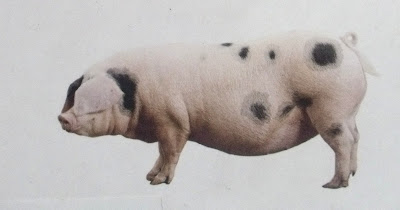 A friend recently asked me for examples of the “campus novel”, especially local ones – and I couldn’t think of many.  Internet sources list dozens from elsewhere – David Lodge’s satirical novels pre-eminent among them – but for South Africa I could only recall J M Coetzee’s grim novel Disgrace, which features its disgraced professor but is only partly campus-set; and there’s Graham Lang’s Clouds Like Black Dogs, set in the art department of my own university.  I’m told there are one or two others, but none that I’ve read.

I don’t know that we have anything on the scale or density of Jane Smiley’s new novel, Moo.  Some years ago I was hugely impressed by her Pulitzer Prize-winning A Thousand Acres, a Midwest-America “rewriting” of Shakespeare’s King Lear.  The fictional Moo University is also located somewhere on the flat Midwestern plains, and is an institution with a strong agricultural-research element.  Hence there’s a lot about pigs (or “hogs”, as they prefer), chickens and cattle, and the eating thereof.  But also so much more about the inner workings (I’m tempted to say “bowel movements”) of a large university: its pedagogies and its politics, its committees and conferences, its internal squabbles and eccentric characters.

Indeed, there is no really central character, rather a slew of personalities, from pompous Associate Vice-presidents to minority-group students, an influential secretary and a deluded economist, a nutter nursing a secret revolutionary agricultural machine, a cafeteria serving-lady, and many more – their lives all intersecting in weird and ironic ways.  The whole is so intricately plotted that, having finished the novel, I enjoyed going right back to the beginning again to understand just how Jane Smiley manages to draw the multiple strings together.  Many of the characters comment on each other, as does the authorial voice, so your opinion of them never quite settles; it’s impossible either to sympathise wholly with one character, and almost impossible not to empathise with even the most obnoxious personages.  It’s all very sly, at times laugh-out-loud funny, highly intelligent, with disturbing elements of truth in even the most outrageous views presented.

We might feel rather isolated, if not unique, down here on the southern tip of Africa, but there’s much in Moo that university types will easily recognise; there is a kind of global “university culture”.  Take this passage:

It was well known among the citizens of the state that the university had pots of money and that there were highly paid faculty members in every department who had once taught Marxism and now taught something called deconstructionism which was only Marxism gone underground in preparation for emergence at a time of national weakness.
It was well known among the legislators that the faculty as a whole was determined to undermine the moral and commercial well-being of the state, and that supporting a large and nationally-famous university with state monies was exactly analogous to raising a nest of vipers in your own bed.
It was well known among the faculty that the governor and the state legislature had lost interest in education some twenty years before and that it was only a matter of time before all classes would be taught as lectures, all exams given as computer-graded multiple choice, all subscriptions to professional journals at the library stopped, and all research time given up to committee work and administrative red tape.

This is only slightly tongue-in-cheek: anyone who has listened to recent pronouncements issuing from our own ministries would be forgiven for deducing that universities and academics are regarded by government with grave suspicion, if not antipathy.  Insecure and totalitarian elements in the ruling party (present à la past) evidently cleave to the old mantra that a poorly-educated population is a malleable one.

We literary lot can be regarded with particular suspicion – the best antidote to which is to class us as irrelevant.  (Many of our current “development”-driven funding models simply leave literature out of their categories.)  We are not all post-Marxist deconstructionists, mind: at least some of us would concur with one Moo U character:

Margaret was not fond of recent fashions in literary theory, fashions that delighted in finding formal or(and) stylistic contradictions in a piece of writing(text), and used them to prove that the text has no meaning.

Margaret is proud to be able to deliver a dissenting paper on the subject to the Modern Language Association (MLA), America’s premier literature-studies talk-shop, but she’s thoroughly deflated upon realising that MLA conferences comprise “too many papers on too many topics at too many conflicting times by too many self-absorbed professors.”  Having been to a couple of MLAs myself, I can confirm the experience!

And at least some of us must be troubled by the imputation that we belong to a “a professorial population that was, in general, insulated from the consequences of most of its own actions by tenure, mandated salary rises, and other perks of university life.”  In this novel, those perks are being threatened by major budget cuts (as we are in South Africa at the moment), with the result that universities are shoved for funding in the direction of commercial corporations.  Minister Blade Nzimande has uttered similar sentiments in the wake of the #FeesMustFall campaign, ignoring the lessons of the rest of the world that privatising funding is almost always disastrous for academic freedom and innovation.  As Marina Warner has (sorry) warned of British universities, “the new managers want to pack ’em [students] in and pile ’em high – and then neglect their interests by maltreating their teachers”.  This is Smiley’s take:

Associations of mutual interest between the university and the corporations were natural, inevitable and widely accepted.  According to the state legislature, they were to be actively pursued. ... Actually paying for the university out of state funds was irresponsible, or even immoral, or even criminal (robbing widows and children, etc., to fatten sleek professors who couldn’t find real employment, etc.)

One result of corporate interest is that a certain Dr Lionel Gift –  a particularly self-satisfied economist whose solitary virtue is what he calls “consumer insatiability” supported by rigorous rationality –  compiles a report supporting the digging of a gold mine under (or rather, through) South America’s last remaining virgin cloud forest.  The leaking of this report proves one of the novel’s central events, sparking conspiracy, farcical exchanges, a riot, and a corporate implosion.  Dr Gift would come across as quite insane (or a “piece of shit”, as another character views him), were it not so true to reality. (Just a fortnight ago television news showed footage of authorities blowing up illegal goldmine workings in Peruvian rain forest; and South Africa is replete with instances of mining interests, often supported by university-based “consultants”, trumping environmental-damage concerns.)

Apart from this ecological thread, Moo also encompasses a strong animal presence.  Indeed, it opens with a description of a building named “Old Meats”, now destined for demolition but once

bustling with activity, with white-coated, bloody-aproned meat science instructors who formed a tangible link between the animal on the hoof and the meat on the table.  They were men of great strength and specific physical skills, who could fell an animal and bleed it and gut it and skin it, then show you the layers of fat and meat, the marbling that distinguished Grade A from prime.  All the time the blood was flowing, they’d be talking. ... They had no illusions, those men, about the cost of human life – it was high, and the fate of domesticated animals and plants was to pay it.

Now, Old Meats contains just one large hog, named Earl Butz, subject of a renegade academic’s semi-secret feeding experiment.  Earl, who periodically gets quite of bit of interiority from Smiley, is just about the only character we can unreservedly sympathise with:

Earl Butz was getting monstrous big.
Earl himself felt it in the effort it took him to heave himself to his trotters in the morning, in his increasing desire to lie around and have things, like cooling baths, brought to him, rather than going to receive them.  There was a suspicious bulge toward the center of the pen in the shape of Earl’s toileting area – his characteristic fastidiousness was beginning to disappear.  He still worked hard at his main occupation of eating.  He couldn’t help that; it was bred into him, but like any variety of genius, appetite was beginning overshadow other, more individual traits of his personality.  He no longer played with his toys, for example...

It’s impossible to do full justice to the complexity of this novel in a short review; Smiley seems astonishingly well-versed in so many disciplines and areas of university life, all of which are treated with both understanding and barbed humour, and she brings it all to a spectacular close.

We could do with another novel like it here – goodness knows we have rich enough material! 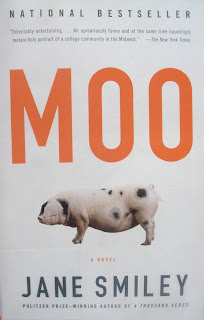 Posted by critical diaries at 19:56