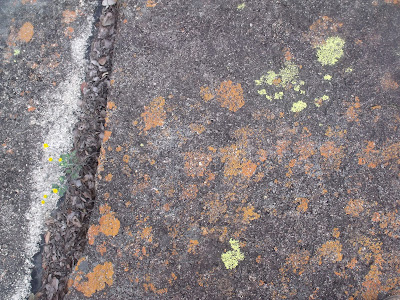 When faced with scenes or situations that baffle my ability to express them, I often resort to the miniature.  I focus my camera lens, Super-Macro engaged, on tiny, maybe abstract patternings, hoping perhaps that something of the greater truths might somehow be encapsulated there.

I have been trundling around my (almost) natal town of Mutare, inevitably encountering fragments of memory scattered over decades – mostly from childhood.  My junior and senior schools, which I’ve never wanted to re-enter – but I glimpse from the road the porch of the assembly hall where I quite inadvertently sparked my one and only boy-fight.  I drive past the houses of then-friends’ families: the Clacks, the de Zoetens, the Grisposes, the Balls.  I recall stretches of rain-warm streets and avenues of silver oaks from cross-country runs.  I pass the service station where I kept a bike that I rode the last few miles to school; and the dirt road behind the sports club where I skidded in sand, came off and cracked my elbow – thus disqualifying me from entering a national drama competition – I was due to play Marlowe’s Faust.  “O lente, lente currite, noctis equi!”  I pass the Board & Paper Mills, now defunct and decaying, where a kindly manager once gave me a huge pile of white card that kept my various projects going for years.  Just down the road, the SPCA kennels which my mother visited every week; and the glass factory in which my father worked unfailingly every week-day for some 27 years.

There’s the unmarked, unremarkable army base to which I had to report in the crazy days of 1979, and outside which I was more recently detained for a day for taking photos of two ceremonial nineteenth-century cannons, nose down in long grass.  Now I see they’ve resurrected the cannons and mounted them on plinths either side of the gate, so my arrest had some positive result. 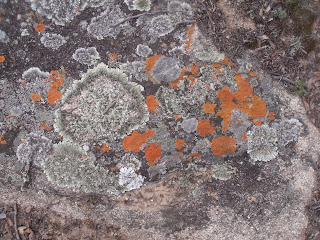 All the time I’m suffering that dislocation brought on by subtle and not-so-subtle changes: the slab-sided cathedral looks just the same, but the surrounding streets are a moonscape of potholes and neglect.  Shops still stand but have changed hands: the gift shop in the arcade has been replaced by Western Union Money Transfer; the bookshop which for twenty years provided endless fascination is now a hairdresser; the restaurant at which I worked for a while serves the same fast food but under a different, equally cheesy name.  What used to be the office of the Umtali Post – in which my first published poem appeared – is now the Manica Post, another arm of the government’s propaganda machine. There are old and new petrol stations, but almost all with unfamiliar company names – Comoil, Zuva – ousting the well-known multinationals and selling ethanol ‘blend’ at a high price impervious to global trends.

Walking through the streets and the supermarkets (now mostly South African: Spar, Pick’n’Pay), I see scarcely a white face.  Contrary to paranoid ruling party rhetoric, whites are now all but irrelevant – a fraction of a percent of the population.  One sees gatherings only at the odd club, old-age home, or church – one rural Christian congregation used to have 64 members, now it has 17.  People in public are mild, friendly, and quietly cautious about the future.  I stop to chat to a young man – Tinashe – who makes a living six days a week on a suburban street corner, selling eggs, bread, chewing gum, airtime tokens, crisps and the like from a tiny portable stand and umbrella.  He is voluble and forthcoming, with the sweetest strong-toothed smile, but exudes a frustrated air of entrapment as he explains his business practice and the pittance he makes.  There is no ladder to climb here, almost no way for anyone but a politically-connected elite to flourish.

Superficially the place is peaceful, the suburbs reasonably well-kept (only the road surfaces, or lack of them, attest to the inefficiency and corruption of the city council, which as I write is being exposed by a government audit).  Power supply has been better than at home in Grahamstown (paradoxically because of an injection from Eskom!); water supply seems fine despite the drought; Australian flame trees in flower give the town a kind of flamenco pizzazz.  But most major industries have collapsed; almost all the iconic firms of my childhood, of which we were indirectly proud, are gone, replaced, if at all, by a welter of informal trading, cross-border smuggling, hand-to-mouth ingenuity.  Hence most of the shanty-like informal enterprises that were razed by the government’s vicious Operation Murambatsvina in 2008 have re-established themselves.  That’s what Zimbabweans do: rather than risk more conflict, or gather in large demonstrations (there are regular small ones, instantly smothered), they make do, with a kind of casual fortitude: shrug, laugh, cleverly improvise. 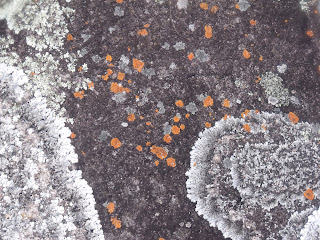 What doesn’t change, except at geological pace, is the topography, these astonishingly beautiful hills, even now looking improbably lush.  My host takes me up to Inyanga, granite country, mile after vista of outcrops and streaked batholiths and thrusting kopjes patched with multicoloured lichens.  I can scarcely stop taking photographs of that strange and wonderful life-form, that will without question outlast us stupid humans.  This is my refuge, for the moment.  The critic Jonathan Bate rephrased the French philosopher Bachelard: “The more we miniaturize the place we live in, the better we can dwell in it.”  Dwell: a word with loving and ethical resonance.  I dwell on – dwell among – these hardy splashes and patterns.

We explore the miombo, or brachystegia woodlands between the hills – so rich and unique an environment, my host asserts, that it should be defended with as much fervour as is the rhino.  Special birds: Southern black tits, and White helmet-shrikes, and a favourite of mine – the White-breasted cuckooshrike, unspectacular two-tone, but so dapper and serene, like snow-and-gunmetal. 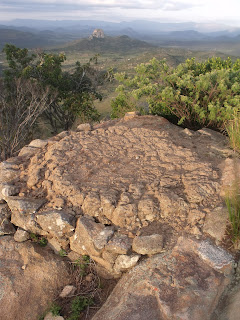 And we climb one kopje, bearing the remnants of Iron Age stone-built fortifications around its single access route, the foundations of huts on top, and a single thin iron arrow-head.  We are not far here from hillsides still etched with mile upon mile of ancient agricultural terracing: that too is Zimbabwean ingenuity and stubborn fortitude.

The night is luminous with a full moon, vibrant with crickets and fruit-bats, and an apparently solitary Wood owl calling, You-too, you-too, wouldja hook-up?  I don’t want to leave this place and time, knowing I’ll have to, of course: O lente, lente currite, noctis equi – Slowly, run slowly, horses of night!

Posted by critical diaries at 17:40