No.34 - Student protests and feline philosophy 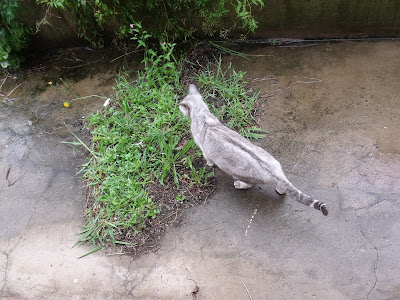 It’s all rather surreal.  In between spasms and pockets of activity, campus is eerily quiet.  I emerge from a class with a radically diminished and subdued group of students to find that the police have been stunning protesters with rubber bullets.  It’s all over; the only evidence is the platoon of cops gathered at their truck down the street, and paramedics closing their ambulance doors on someone injured and bumping off across the lawns.

It’s surreal participating in a march intended to show solidarity between students, academics and management, to present a petition to the ANC authorities.  We all want better funding for tertiary education.  Scarlet and black academic gowns stir with conversation and uneasy jokes.  But where are the students?  A certain suspicion develops as the march moves slowly off in the direction of the Town Hall.  A student organiser, after a struggle to get the bullhorn to work, encourages us to shed academic dress and to dance and sing, “or even just hum”.   There is, apparently, only one approved way to protest – that stamping, singing mode that to outsiders makes anger look rather enjoyable.  After less than a hundred metres the little coterie is enveloped by a swarm of running, shoving youngsters, from who knows where?  Some are certainly not university students.  A bald-headed man, who may or may not be from one of the several ‘factions’ making their presence felt, brings the thing to a halt, engages in vigorous discussion with the Vice Chancellor, shouts hoarsely that he is “boycotting this march” – which to my mind means he ought to go home.  No one can hear what he’s saying.  I can’t see this march getting anywhere, so having shown my solidarity with its very reasonable requests, I leave it and go home.

The cat greets me, stretching and mewing.  She wants to play and go for a walk.  I take her advice and join her and blow off a little frustration, uprooting alien saplings on the forest slopes. 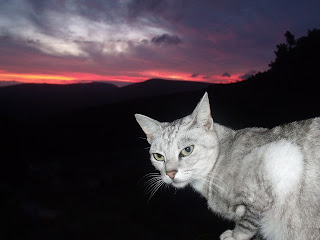 Life is very clean and straightforward for a cat.  If it’s not a direct physical threat, to be avoided or fought, or if it’s not edible, she just ... chills. She somehow manages to be preternaturally alert and meditative at the same time.  I’m convinced there’s a lesson to be learned there.

Meanwhile my stomach churns and my sleep is broken.  A sweet and earnest team of Department of Health statistics-gatherers comes round and informs me my blood pressure is a bit high.  It’s as if my innards are directly mimicking the chaos in my professional world.  That turmoil is following some numbingly predictable trajectories; clearly key actors have learned nothing from history.

History, ironically, is not on the side of a favourable outcome of the fees upheaval.  The protesters – meaning that minority of people, who may or may not in individual cases be students, who promote a more or less confrontational approach to the fees problem – are generating an energy which is temporarily gratifying for them but undermines everyone else.  They seem intent on an anarchic and prolonged closure of the universities, in service of an unattainable goal.  Look back at Kampala, Harare, Kinshasa, and any number of other cases: prolonged and repeated closures have a predictable outcome.  Established academics leave; richer students leave; funding diminishes further; infrastructure erodes; publications dry up; research shrivels; a machinery of mediocrity grinds despondently on; both national and international recognition vanishes, as degrees lose quality and kudos.

So why do these protesters persist?  Conspiracy theorists revel in rumours that ‘third forces’ are at play, powers that actually want the fees issue to fail, and the universities to fail.  Anti-government forces that want the ANC to be seen to fail?  Or the ANC itself, which would love to see these troublesome intellectuals and uppity youths disempowered?  Who knows?  Mixed and leaderless movements disable negotiations.  We want unity on this, but unity entails compromise; in democracies finding compromises and forging lasting solutions takes patience – and protesters making demands are by definition neither compromising nor patient.  So it goes on.  Anger gets misdirected.  Enemies are made precisely where allies are needed.  Self-defence is turned into racism.  Disagreement, even over minor tactics, is twisted into disloyalty.  The rule of constitutional law is howled down as oppression. Managements issue sensible but ineffectual generalisations.  Social media bristles with viral lies and distortions and snatches of cell-phone footage, with unpredictable effects.  (We are, the Economist claims, in an era of "post-truth politics", a seriously frightening idea.)  Sundry “causes” intermingle, not all amenable to tactics inherited from the struggles of the apartheid years.  The government shows an astonishing and depressing lack of urgency and leadership, despite a plethora of interesting and possibly quite viable ideas flowering in the papers and chat-groups. 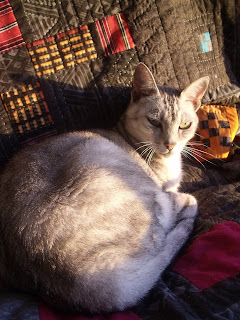 I watch the cat on the hill-slope.  For a long time she just settles and sits. My tree-pulling is of no interest.  She is entirely self-contained.  Yet her ears are flickering and listening constantly.  Finally a scent or a rustle too subtle for human senses attracts her, and she begins to stalk.  She is utterly focused.  I call to her but there is no response.  When you stalk, stalk.  Very Zen.

In my university context, what am I focused on?  In amongst the mush of administration, committee duties, and of course protests, what is the task?  It seems very clear to me.  I am here to improve my students’ skills.  That is my job, and it is the only thing that university can uniquely provide students, in service of making them maximally functional citizens.  It is irrelevant to me where the student’s fee-money comes from: a parent, a bank, a scholarship, the taxpayer, herself.  The skills still need to be taught and acquired.

I am under no illusion that this is in itself a simple thing.  Literary skills are multiple and complex – more than just reading and writing.  They are perception and argumentation.  They are about values and ambitions and cultural predispositions.  And things that get in the way of teaching the skills are also multiple and complex: they can take the form of a student’s psychological breakdown, or a hangover, or an unfruitful university policy, or an ignorant political decree from the Department of Labour, or a student's apathy.  Or protesters hounding a lecturer out of the classroom.


Nevertheless, this one goal in my teaching life helps ground me, and helps direct my responses to situations as they arise.  Things only happen one at a time, so I try to deal with them one at a time.  My focus helps me decide what I can influence and what I can’t.  When something is beyond me, I remind myself of the cat.  I remind myself of my self-sufficiency.  I sit still.  I leave the impossible situation behind me for the moment and turn to do something else: pull up a Port Jackson wattle, make something beautiful that might just outlast the fracas of the day, and might even outlast me.  Cuddle the cat.  She likes that, the rich simplicity of touch.  Nothing she does or says is not the truth.  I can pluck ticks off her eyelids.  She knows what I’m doing, and trusts me completely, even when it stings.

Ah, truth and trust.  We humans are so bad at those.

Posted by critical diaries at 23:33