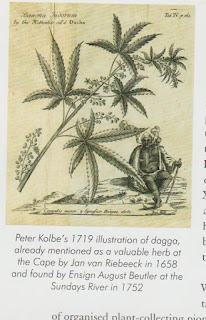 As everybody knows, dagga – Cannabis sativa, marijuana, hemp, pot – is everywhere. It always seems to have been there, moving beneath the surface of so-called civilised life like a dark and smoky doppelganger. In the centuries before it became criminalised, it was of course entirely above the surface – and in recent times, as it becomes progressively de-criminalised again, it rises pungently back into sight. The building crew next door blow its fumes through my windows; my generous neighbour grows it in profusion, distils it into numerous forms of crumble, cake, chocolate and unguent, and tries to cure with it all my ills – my abrasions, stiffness, insomnia, congenital grumpiness and other manifestations of mental instability. It has never agreed with me. When I tried smoking it as a student, I couldn’t really inhale through the coughing, and it just made me feel wobbly and ill. First and last attempt. In any form it smells ugly and as a treatment for sleeplessness it made my dreams even weirder than they were before. Enough already.

Nevertheless, as I pursue a larger project on the role of plants in Southern African literature, I’ve mulled upon dagga’s historic ubiquity, and wondered why I hadn’t encountered it more in our literature. Or had I just not noticed, since I wasn’t looking for it?  I began to think of it as a pioneer boundary-breaker, supreme among the many plants that care not a fig (so to speak) for our imposed borders, controls, cultural predilections and scientific distinctions. It is, or would be, the perfect patsy for what is being touted by eco-academics these days as “multispecies history”. For starters, cannabis early breached the great avowed divide between the ‘indigenous’ and the ‘alien’. Cannabis is originally from Asia, introduced to southern Africa through Arabic East Coast traders, if not a “thousand years ago”, as our own Hazel Crampton suggests in her entertaining little book, Dagga: A Short History, at least a very long time before Europeans settled. Not strictly indigenous, then, but it might as well be, so pervasive has its presence and social effect become. It breaches all the flimsy and artificial borders between classes and race groups, between geographical areas, between economic distinctions. 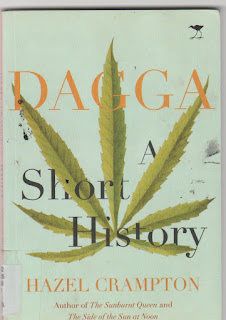 As for appearances in written literature, we obviously have to begin with Jan van Riebeeck, commander of the first Dutch settlement at the Cape in 1652, who recorded in his diaries that he found local “Hottentots” already smoking cannabis. I’ve found a few more references in my scratchings. The traveller Peter Kolbe illustrated it in detail in 1719, and subsequent explorers regularly noted its intoxicating effects on its users (often with racist disdain). Two early Rhodesian poets noted dagga’s local use, though didn’t admit to trying it themselves. Kingsley Fairbridge, who arrived at the cluster of huts that would eventually become my home town, Umtali/Mutare, in the 1890s, was despite his youth a competent poet. He wrote “The Smoker of Imbainje” (mbanje is Shona for dagga) as one of his several rather noble if flawed poetic efforts to speak in the headspace of Shona personages. This old man is dislocated and confused, the ancestral spirits swarm, his wife is dead, he cannot even find his dagga-pipe, suspecting his nephew Goro, “the dog”, of having stolen it. Dagga is his consolation, an escape:

Along the sodden slopes. But, Pipe, we know

Dry paths beyond the Distance … Let us go

As we have gone before.

The ghost-hands cannot hold us any more …

Catches the windpipe, wakes the cough, but stirs

The blood within the vein, and blurs

The Hunger and the Need.

Hm, maybe Fairbridge had tried it after all. A couple of decades later, a less gifted Rhodesian poetaster, Cullen Gouldsbury, depicts in his similar poem “The Daha-Smoker” an old Shona man escaping into dagga’s dream-world as a glum response to loss of his family, of his lifestyle and spiritual beliefs, even of the “sentry trees” which once surrounded his homestead, largely destroyed by the “White Man, peering and prying”. To bring the travelogue-as-literature into the modern era, there are the amusing episodes of joint-smoking among the canoeists of William Dicey’s wonderful Orange River account, Borderline.

The “zol” is probably most often depicted in our more liberated, seamy contemporary urban fiction. During the prohibitive twentieth century, dagga smoking acted variously as transgressive in all sorts of ways: it was part of youthful rebellion against authority, used as psychological escape, alternately an adventure and a stigma, alternately essential to some people’s sense of ease, and inducing madness. So the protagonist of K Sello Duiker’s brilliant little novel Thirteen Cents uses dope – in between the other hard drugs floating around his destitute Cape Town life – to blur “the Hunger and the Need”. In Duiker’s other well-known novel, The Quiet Violence of Dreams, the protagonist is institutionalised, his cannabis-induced breakdown symptomatic of a much wider socio-political malaise.

A similar instance is the key novel of Zimbabwe’s inspirational maverick Dambudzo Marechera: The House of Hunger’s phantasmagoric quality is, it has been suggested, governed if not caused by the characters’ beliefs that “dope is heaven”, that there “is a part of man that is permanently stoned, and that is beautiful”. The personal reflects the political: the characters crave freedom “as one craves dagga or beer”. (In fact, behaviour in the novel is more thoroughly affected by alcohol – also plant-derived, of course.) In a brief encounter in Nthikeng Mohlele’s 2016 novel Pleasure, the narrator’s brother rants “about why police never tired of arresting him”, despite the fact “that there are far greater and unacceptable crimes than cannabis use”. On the other hand, his lawyer dismisses him as a “weed-smoking goat stuck in the sewers of self-pity and denial”.  A little more positively, Cape Town writer Tatamkhulu Afrika’s poem, “The Dagga-Zoll”, depicts the speaker approaching a pair of lurking down-and-outs (bergies). He suffers various class-induced anxieties and fears, until the man “smoking a dagga-zoll/ pass[es] me the spittle-/saturated end” – an offhand, if slightly unhealthy, gesture of unexpected sharing.

This smattering of examples, all brief but sociologically resonant, is surely just the tip of a heap of dried dagga-leaves. I haven’t even started exploring Afrikaans or Xhosa or Zulu literatures. My most talented scouts and informants believe Koos Kombuis would be a likely source. There must be many, many more. If you know of any I’d appreciate a pointer. Is there a work out there in which dagga is really central, as opposed to passing mentions? If not, why aren’t you writing it? Will there be any stimulus and pizzazz left in dagga now it is legal again, or will it become as routine and barely significant as “He lit a cigarette” or “A dog barked”?  Has CBD oil found a literary stage yet? Do let me know. Koff koff.

Dan Wylie's new novella, The Flight of the Bat, will hopefully be launched in Makhanda during the National Arts Festival in July.

For more on Jill and Dan Wylie's books and art, visit www.netsoka.co.za.

Posted by critical diaries at 11:45 2 comments: