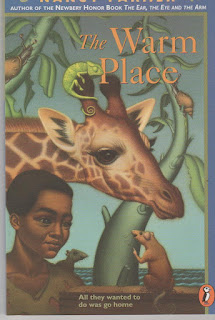 She was born in 1941 in Phoenix, Arizona, but as a younger woman spent some 17 years in Mozambique and Zimbabwe, mostly doing entomological work – largely spiders in Mozambique, then tsetse fly control in the Zambezi Valley. (She and I must have come close to crossing paths at Rukomeche near Mana Pools, an area I also haunted for a time.) During this period she met Harold Farmer, then teaching English at the University in Harare, marrying him after a whirlwind courtship (a week, according to Wikipedia, exaggerating slightly). Harold was himself proving to be an excellent poet, publishing a slim volume with Longmans, Absence of Elephants, which I’ve written about elsewhere.

Much affected by story-telling traditions among the peoples of Zimbabwe, Nancy went on to be a prolific, charming, wide-ranging and acclaimed novelist, writing mostly for the young of various ages. Her topics and settings vary widely, too, from the futuristic The House of the Scorpion, set in the violent Mexico/USA borderlands (possibly my personal favourite), to the more conventional Sea of Trolls (2004) with its northern panoply of trolls, dragons etc. I’ve said ‘charming’ and ‘conventional’, but that’s not quite right. On the one hand, Farmer doesn’t spare her youngsters the tough realities – Vikings throw babies into fires, girls menstruate, and so on, though she’s never gratuitous; on the other hand, she consistently obliges her readers to question prejudice and preconceptions. So, for example, the young protagonist of Sea of Trolls, kidnapped from Lindisfarne by Vikings, discovers they are not all as bad as they’ve been portrayed; in turn, the Vikings vilify and stereotype trolls, who also prove to be rather more complex, and so on. In this subtlety and quiet challenge, Farmer makes a writer like JK Rowling look decidedly derivative.

As befits most YA fiction, her protagonists are themselves youngsters, presented with various challenges and put through the mill of sundry adventures. This is true of her Zimbabwean novels, too. The slenderest and ‘youngest’ of three I’ll look at here is The Warm Place (1995). It’s not set in Zimbabwe as such, or even Africa more broadly, as it involves the capture of a young giraffe and her incarceration in a San Francisco zoo.  She finds herself able to collude with a chameleon who teaches her how to disappear, a rat with an aristocratic name and a brusquely dismissive manner but a good heart, and a wee lad who is one of the few humans able to speak with animals in the Common Tongue – all devising a plan to smuggle themselves back to Africa – which is, of course, the Warm Place. It’s funny, fanciful and economical even as it’s scathing about exploitative humans in general and the wildlife trade in particular. This might explain why it was more popular in Africa than in the US. Despite its fanciful elements, it’s observant about real animal behaviour and ecology, without ever being overtly didactic. Here as elsewhere in the novels, Farmer delights in slipping in African-style folktales, sometimes based on Biblical or Talmudic stories, lightly delivered by characters to each other, with both entertaining levity and ethical weight – the very essence of fine story-telling. 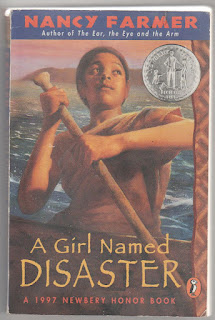 Two novels firmly set in Zimbabwe are aimed at older readers and are more substantial; indeed they are satisfying reading for Ancient adults as much as for Young ones. A Girl Named Disaster (1996) begins with twelve-year-old Nhamo (‘disaster’ in Shona), living on the northern border of Zimbabwe with Mozambique, on one of the rivers running into Cabora Bassa dam. It’s an area familiar to Farmer from her entomological studies, and it shows. She also got to know local Shona culture, its artefacts and family structures, pretty well. Always a tricky business, writing into a culture not one’s own, but she manages it without condescension or stereotyping. (For non-Shona readers Farmer supplies several pages of glossary, cultural notes and extensive research bibliography.) Nhamo finds herself embroiled in arguments about a witchcraft event (this spiritual dimension is depicted as authentically crucial in the community even as members disagree about it), eventuating in her betrothal to a ghastly man. (Such arranged child marriages remain an issue in some parts.) On her grandmother’s advice, she escapes in order to find her long-absent father back in Zimbabwe. The Mozambique civil war growls in the background, hippos guard the river. The father doesn’t sound very promising, either… Suffice it to say things don’t go quite as planned. It’s all about what Farmer identifies as her main thrust, self-reliance.

Nhamo’s journey is epically unlikely, I suppose, but delivered in grounded and realist mode. The other novel is a rather different kettle of fantasy. The Ear, The Eye and The Arm (1994) won the most prestigious prize in this field, the Newbery Honor, among others, and is set in a futuristic Harare. The year is 2194, but the city is still recognisable in its general layout, its divisions between rich and heavily fortified northern suburbs and ‘township’ trashlands ruled by a shadowy matriarch. The transport system is suitably modernised, but Mbare retains the colourfully chaotic character of the informal market. And now the son of a General has been kidnapped … The eponymous body parts are in fact the three members of a detective agency hired to find him; each has a wildly distended organ appropriate to his role. But of course it is a trio of youngsters who are central to the search, racketing through various vicissitudes and strange hidden realms of the vast city. It’s all wonderfully inventive, easily visualisable, oscillating between terror and hope, disappointment and idealism, in its path to its inevitably satisfactory and triumphant ending. In that, at least, Farmer conforms to the comedic conventions of YA fiction. 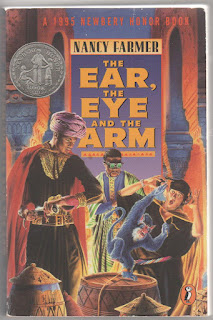 It's all lovely stuff, with deft, often funny dialogue and vivid description, and a natty weirdness quite unlike anything else to have emerged from Zimbabwe. Even in the novels, as in her slightly scrambled, candid and self-deprecating self-portrait on her official website,  you sense behind it a sweetly maverick person it would be wonderful to meet. Perhaps one might, in the deserts of Arizona, where apparently she and Harold (I hope) still live.

Posted by critical diaries at 11:51 2 comments: