No.13 - Zimbabwe Despatches: Politicians and preachers 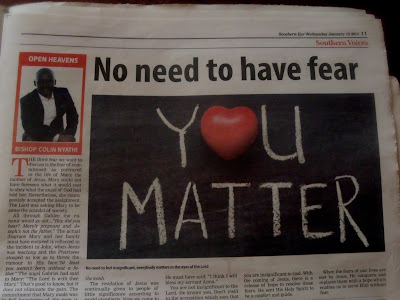 Any attempt to gauge the temperature of a country, even for a regular visitor like myself, is bound to be partial and spotty.  I guess there’s much that seems so familiar to me that I scarcely notice.  One striking experience has been a drive out to the mining village of Penhalonga, where we lived for a few years in the early 1960s, in a tin-can of a mining house on the edge of what was probably a pretty toxic mine-dump.  Back then, there were exactly three shops and a service station; half a century later, there are still only those three shops, albeit with different names and clientèle, with a scatter of informal traders occupying rickety wooden platforms along the roadside.  The building in which I first went to school – there were ten of us, six different grades, one teacher – is derelict; so is the public swimming-pool in which I achieved my first true dive.

Nothing could be more symptomatic of Zimbabwe’s general stagnation.  Only the police camp has expanded.

Stagnation is the pervasive feeling now, a strangely peaceable kind of waiting, beneath that a despairing sense of returning to the dark days of 2008.  Almost any Shona person I speak to – the airtime salesman on the street corner, the old-age home security guard, the stationery shop owner – will end a disquisition on the situation with a characteristic gesture, clapping the hands together and then flopping them outwards, palms up, as if dispensing their emptiness to the world, and saying: “We can only pray, that’s all.”

It seems to me that there’s a marked upswing in the presence of the religious in national discourse.  There’s much controversy over the proliferation of “prophets”, upstart cultic figures promising huge riches to congregants but palpably enriching only themselves.  Conelia Mabasa writes in The Standard:

These new ministries are largely driven by miracles and healing, hence we have had a huge dose of ‘prophecies’ and ‘demon-manifestation’ during church services.  We have heard of miracle babies, miracle money, anointed apples, anointed condoms, gravity defying miracles, holy oil, holy water, among other hard-to-believe signs ... [T]he way Christian belief has evolved in southern Africa is sad, if not pathetic. (12 Jan)

The newspapers are full of religious rhetoric, the Christian lying uneasily alongside or interacting with traditional beliefs and magic.  As one commentator puts it, “It is a fact that a diviner becomes a prophet when he becomes a Christian and the reverse is true for a prophet.”  Quite how that works I’m not sure.  One article estimates that 90% of Zimbabweans profess Christianity – including, apparently, members of the ruling party.

One controversy has been extensively aired.  Apparently on Mugabe’s orders (he is away on holiday in the Far East – again, again producing a flurry of false rumours that he has died), Acting President Mphoko called on the entire nation to pray for rain.  This provoked protests both from within ZANU-PF, with at least one minister retorting that they should be concentrating on actual drought-mitigation measures, and from the opposition MDC.  To the latter Tichaona Zindoga, political editor of the government mouthpiece The Herald, responded on 12 January:  “[T]he [MDC] had said that the ‘Satanic’ Government ‘can’t call rain prayers’ – without a sense of irony, of course. ... Because the party has no positive ideas to sell to the Zimbabwean electorate, the opposition hopes to inflict pain on people via hostile interventions from evil countries in the West and the Devil in Hell himself.”  (This uttered without a sense of irony, of course.) 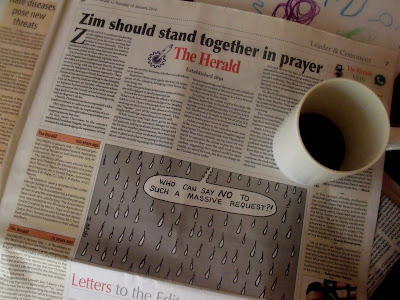 The Standard published its riposte a few days later (17-23 Jan):

Politicians know that churches represent a large constituency.  They know that what Karl Marx said is true that ‘religion is the opium of the people’.  They are, therefore, eager to use churches to quieten the masses who are getting restless for not being paid their salaries and are sick of being misgoverned ... [T]his week of prayer, is merely going along with a wicked and lawless political leadership in response to drought.

The Herald, for its part, can’t resist trying to turn this into racialised political capital.  In its view, small-minded opposition politicians, think they

can blame the imminent food shortages and lack of water on the land reform programme and that this should win them votes.... South Africa, itself the regional economic powerhouse, whose land is still largely in the hands of MDC-loved whites, is expected to import 5 million tonnes of maize due to drought.  So why can’t our political merchants of evil intentions realise the food shortages go beyond ZANU-PF policies?  ... God will answer in His time, in His own way.

The desperation facing so many in the drought is regularly being tied more broadly to climate change.  I’ve seen no sign in the media so far of the kind of climate-change scepticism that gets disproportionate air-time in the West; it’s taken as given, but there is scepticism that science has the capacity to address it.  In short, only faith can; as one headline puts it: “Zim turns to God as climate change disrupts livelihoods” (The Herald, 18 Jan).

The collaboration between Church and State on climate change, however, seems largely to do with trying to readjust the outcomes of the Paris agreements of COP21, in the interests of global “fairness”. The churches are to “liaise with Government to normalize its political relations with other nations so that people will also benefit from this global climate change compensation”.  It’s the usual anti-West diatribe, laced with the toxin of victimhood, thinly veiled.  Though government is making noises in the direction of solar energy, there is little to be seen of practical Church-State activity to address drivers of climate-related poverty and damage in the country: curbing massive deforestation, for example (100,000 ha of woodland irreversibly lost annually), or pollution from unregulated Chinese and Russian mining operations.  Instead, they talk of upping coal-fired energy at Hwange, even as the prospect looms of shutting down the hydro generators at Kariba for lack of water.

But the religious undercurrent flows everywhere.  Music, which garners a lot of media space, seems especially prone.  Hence performer Winky D has had to deny charges that he is a Satanist; while raunchy dancer Beverley Sibanda is said to have “hopped from one church to another in a quest to find salvation and to revive her career.”  Singer Fungisai shocks everyone by admitting she is not “a church person”, while another paper defends her as definitely still a “preacher girl”; and Tocky Vibes accuses a rival of stunting his progress through the use of juju.  Apparently “Most musicians use juju or consult prophets to improve their fortunes while others perform rituals before they get on stage”.

Finally, one article claims “Christian literature is on the rise” (while actually arguing it has long been sidelined).  A certain puritanical fundamentalism, all too obviously allied to political agendas, emerges in a related article by Morris Mtisi, in the government-owned Manica Post (15-21 Jan.): “Poverty of academic wisdom: Why Shakespeare and not Ellen G White?”  According to Mtisi,

The poverty of academic wisdom lies in its omission of the truth of divine revelation in its pursuit of glory, self-exaltation and supremacy, in hot pursuit of an education full of what God pronounces as foolishness. ... I question... what we mean by high or higher school education in schools where Godliness is not the subject matter ... at the omission of organized character building. ... Why the world celebrates William Shakespeare and other writers of literature and not Ellen G White who wrote 5000 periodical articles and 40 books, the most translated woman writer in the entire history of literature and the most translated American author of either gender, boggles the mind.

To my chagrin, I’d never heard of Ellen G White, but felt a bit better on discovering that she was in fact a Seventh Day Adventist subject to regular dubious ‘visions’ and ‘dreams’, and was (at least according to one analysis) a serial plagiarist.  (Several of the sentences quoted above are also plagiarised, by Mtisi, from an Ellen G White website, so I felt even more certain that God would forgive me my ignorance.)  One can agree with Mtisi that our world is riddled with “social debaucheries” and “male chauvinism rooted in worldly patriarchal society”, without entirely acceding to White’s sweet but entirely derivative notion that the best education “is to learn how to add to their faith, virtue; and to virtue knowledge; and to knowledge temperance; and to temperance patience; and to patience Godliness; and to Godliness brotherly kindness; and to brotherly kindness charity”.  In Mtisi’s view, “it is critically important to discipline mental tastes and not be perverted by overwrought and exciting tales of fiction or creative writing. ... There is a lot of intellectual rabies in the stuff that we read or study”.

I confess I find such intemperate, uncharitable, doctrinaire denigration of the creative human spirit even more terrifying than climate change. 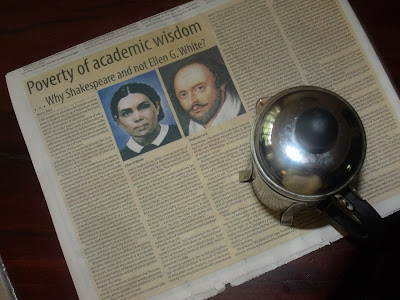 Posted by critical diaries at 21:38