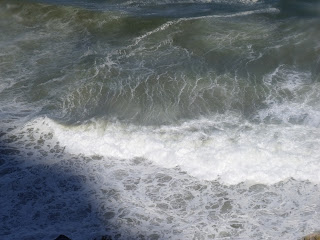 Like most middle-class touristic people who visit Cape Town, I guess, I have now and then dunked my semi-naked body in one or another of the surrounding seas. Always there is someone in the water off Fish Hoek or Muizenberg, Kommetjie or Clifton Beach. What does it all mean? Why do some perform this strange ritual, while others are terrified? What is the social meaning of this liquid sensuality? How has the sheer geography of this ocean-girt city inflected the behaviour of its inhabitants? Can the disparate motivations of all those individuals add up to a pattern, an identifiable ripple in the fabric of our society?

Naturally, there are more writers in Cape Town than you can shake a fresh steenbras at, and many of them have written about swimming off Cape Town – as far as I know a wholly unexplored literary motif.

I started thinking about this – or doing something in my head resembling swimming more than thinking – because in browsing the poetry journals, as one does, I couldn’t help noticing how many swimming poems there are. These are quite distinct from poems about the ever-present ocean itself – what Finuala Dowling called in one poem the “Mad Atlantic” – and distinct from perhaps equally numerous beach-walk poems. It’s the act of immersion that intrigues me, the contact of human skin and salt water, and the relations of this immersion to gender, class and race, to sharks and gulls and kelp, to pleasure and fear, to athleticism and escape, to baptism and reverence. Poems and novels begin to hint at the layered meanings that swimming bears for its various practitioners.

One might start with two extracts from poems by well-known Capetonian poet and academic Kelwyn Sole. In “Poems of the sea for me”, the ocean is both “motherland” and “fatherland”:

to run closer
and dive in
means to
come to

a jolt of blindness
a mordancy of salt
that only shocks
until it passes, and

the swimmer
can perceive
differently
to before

Sole’s poem “Ocean” sounds more cynical about our condition. Perhaps the sea (as Natal poet Douglas Livingstone repeatedly suggested) is our ultimate origin, to which we subconsciously long to return – so we at some level feel weirdly in exile on land:

the sea
does not coddle its children;
we hunker down through squalls,
trust to skidding compasses
past sleeting rain and windscream
merely to be exiled, again and again,
finally stranded ashore: and come
to ourselves walking upon doctrines
of rock                         or sand

Often immersion in the sea is used as a metaphor for something else – the progression of a love-relationship, for example.  This is the case in Rosamund Handler’s “Letter from...” 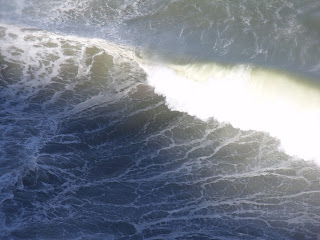 the cowed hush of waves
made me feel

winter again
so many seasons untraceable
yet I recall how it was:
how I could have let go
if only you had held fast
(New Contrast 148:19)

Sarah Frost’s “From the sea” takes this kind of figuration a bit further, here depicting the struggles of the poet herself:

You, poet, alone, immobile, at your keyboard,
the night sighing, a stranger at your back.
You wrestle the anger of the invisible,
lay it down. Stop picking at the scab of ‘not good enough’,
that makes you mute, look around.
Poets shoal within reach,
also surfacing to breathe. (New Contrast 151:11)

This makes for a nice segue to a novel which is also centrally about a poet and the sea, Finuala Dowling’s lovely What Poets Need, whose cover actually depicts a man swimming. The novel’s protagonist, struggling poet John Carson, regularly escapes into the water. Sometimes he has kids in tow:

Another still, hot day dawned, buzzing with the expectations of school holidays. This morning I took Sal, Harriet and Vera’s Alan with me when I went down for my swim at Dalebrook pool. Alan so loved it he stood before me shivering and thin in his towel, asking could we stay there all day ... On the slippery back wall of the tidal pool, Sal fights with him (hand to hand combat) but then steps back in her little Speedo costume and says, ‘I’m the princess. I don’t fight’. (176)

The following passage is particularly suggestive. 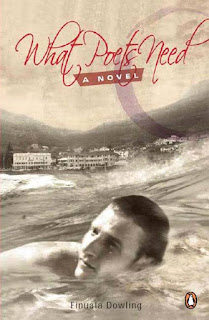 I swim there [Fish Hoek] at least once a week, usually because the tidal pool here is empty of water or too full of people. The men who swim at Fish Hoek corner in the morning are very interested in the water temperature. ’16.9’, they like to say, heartily, reading from a thermometer pendant. The women just stride in, adjusting their bathing caps and laughing as they catch waves on their boogie boards. I’m sort of friendly to them, but quite relieved once I’ve passed the breakers and am alone.
I thought today about those few seconds before you’re properly ‘in’ cold water: how unpleasant it feels as you stand there clutching your unwilling sides. It must be fear of the evolutionary step backwards: back to the old amphibian life. Then, when you’re in, how lovely it is, all cares gone.

In that, you can feel the subtle pressures of gender roles, tensions between companionship and solitude, dress fashions, the imprint of scientific models. And there are more (so to speak) undercurrents in the next extract: sensitivity to seasonal changes, seaborne occupations, modes of leisure, the interface of sea and human architectures – and the internally liberating effect of the swim itself:

In October, you can still see whales breaching, and hear them blowing. Always on calm days there are kayaks gliding, and in almost all weathers, a fishing boat near the horizon. I rest my arms on the wet wall, look across at Simon’s Town bay in the distance and the harbour with its protective dolosse in the foreground, and say to myself, This is your life. It is hard to believe I am so lucky. (195)

The assumption that “swimming is always therapeutic” can be deceptive, though. John Carson takes his ailing 70-year old mother swimming:

... I stayed with her till she seemed to be swimming at her ease. Then I struck out as usual, aiming for the round house at Sunny Cove as my marker. I turned back at one point to check on her, but she wasn’t there. I was puzzled, peering. Something was wrong. I swam back inshore as rapidly as I could. Two men – a father and son, I think – were lifting my mother’s frail, limp body out of the water. She’d decided to cut her swim short, she’d been returning to the shore, when a wave had come from behind and felled her.
We helped her to her feet. She spluttered and staggered ... She hardly spoke again after that, though she lived another two weeks. (204)

The antithesis between the therapeutic and the dangerous swim is also featured in perhaps the best-written of the novels I touch on here: Justin Cartwright’s White Lightning (2002). The rather unfortunately-named James Kronk has returned from England to the Cape to tend his dying mother. He tries to reintegrate by, among other things, connecting with ‘nature’ through mountain walks – and swimming:

The fuzzy lights on the lower levels of the mountain are visible in the biscuit twilight as i enter the water. I catch a wave easily – they are strong but benign, rolling resolutely to the beach – and then another. The water always feels warmer after the sun has set, warmer and more viscous. I emerge from the waves a better man, towel myself, and sit at the water’s edge. (180).

But the mad Atlantic is fickle, and late in the novel Kronk’s own internal and societal unravelling (I won’t reveal too much) is reflected in turbulent weather. He is chased into the sea by some angry pursuers. This is escape for real, rather than escapism: 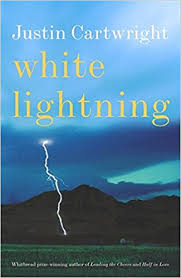 The grey waves are huge. The wind is holding them back so that they rise and fall sharply, their crests dispersed by the wind. Gulls cry in their cold-hearted fashion. Here on shore the rain and the mist are so low that the tops of the sand dunes are obscured, but out to sea, some miles away, a filtered light strikes the water, forming a silver island within the bay. ... I run in up to my waist  and then dive into a breaker. As I emerge from this mountain of water, another huge wave follows and tumbles me over, so that I am rolled towards the beach, where the seven men are waiting. ... I am beyond the breakers now, swimming steadily, breast-stroke. My plan is to swim far out of sight and wait until night falls, perhaps an hour away, and then come ashore in the dark. ... I keep swimming ... out to where my father nearly caught the biggest Red Steenbras ever seen ... (237).

I won’t spoil the ending for you. But it’s a reminder that for all the swimmers taking their pleasure, there are those who failed to swim, and died: so many shipwreck victims, the Xhosa chieftain Makana, who drowned trying to escape from Robben Island in 1819, to the famously suicidal Afrikaans poet Ingrid Jonker, who walked into the ocean to drown in 1965. In the very first poem of André Brink’s selection of translations, Black Butterflies (2007),  entitled “Escape”, Jonker wrote of death in water as a liberation from her own mental distress:

From this Valkenberg [mental hospital] have I run away
and in my thoughts return to Gordon’s Bay
...
Washed out my body lies in weed and grass
in all the places where we once did pass.

So, more or less, it transpired. But let’s end on a more cheerful note – a scene from, of all places – Agatha Christie’s one southern African-set crime thriller, The Man in the Brown Suit (1924):

I caught a fast train to Muizenberg and got there in about half an hour. It was a nice trip. We wound slowly round the base of Table Mountain, and some of the flowers were lovely. My geography being weak, I had never fully realized that Cape Town is on a peninsula, consequently I was rather surprised on getting out of the train to find myself facing the sea once more. There was some perfectly entrancing bathing going on. The people had short curved boards and came floating in on the waves. It was far too early to go to tea. I made for the bathing pavilion, and when they said would I have a surf board, I said “Yes, please.” Surfing looks perfectly easy.  It isn’t. I say no more. I got very angry and fairly hurled my plank from me. Nevertheless, I determined to return at the first possible opportunity and have another go. I would not be beaten. Quite by mistake I then got a good run on my board, and came out delirious with happiness. Surfing is like that.  You are either vigorously cursing or else you are idiotically pleased with yourself. (94)

So much for being at sea on a “plank”. 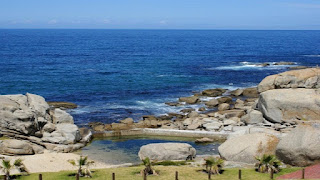