No 74 – Jacklyn Cock’s Writing the Ancestral River: A brief review 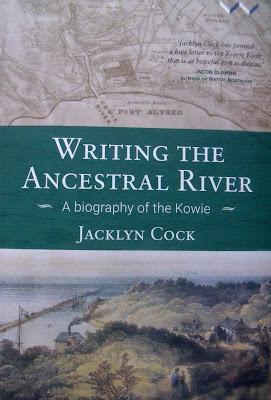 Most mornings for the last fifteen years or so I have gazed out over the coastal plain, the sweeping triangle between Grahamstown, Kenton-on-Sea and Port Alfred. To my right the skyline is formed by Featherstone Ridge, beneath which rises one of the main sources of the Kowie River. The river curls through the hills below, via sacred pools, game farms, the Waters Meeting nature reserve near Bathurst, pineapple and cattle farms, to its egress into the Indian Ocean at Port Alfred, whose lights I can see at night, off to my left. Even further left, almost due east, are the hilltops above the Blaauwkrantz River, another tributary of the Kowie; across one of the Blaauwkrantz gorges ran the railway bridge which dramatically and fatally collapsed in 1911.  And at my back, just over the ridge, is Grahamstown (Makhanda), through which wavers another source, disparagingly known as the Kowie Ditch, so polluted and cramped a crease it has become. At is highest reach, where it crawls through reeds and Rhodes University’s playing fields, it was known in my student days as Kotch Creek – apparently the spot of choice for barking up the effects of one’s drunkenness.

All this – roughly the district once known as Albany – is the purview of Jacklyn Cock’s recently launched new book, Writing the Ancestral River: A biography of the Kowie, published by Wits University Press. Jacklyn Cock is a sociologist with a distinguished list of publications. She made a name for herself as a champion of social justice with Maids & Madams (1990), a study of domesticity, race-relations and womanhood that during the apartheid years was daringly progressive.  She moved on to focus on links between gender and militarisation, and on environmental  affairs, editing with Eddie Koch Going Green, a 1992 collection of essays on South Africa’s parlous ecological state. Later Cock published The War Against Ourselves (2007), a powerful study of how environmental degradation and the oppression of poor and racialised people have so often gone hand in hand. 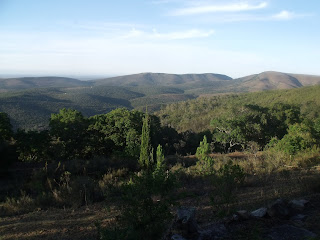 Cock brings these approaches to bear in Writing the Ancestral River, though it’s a much more personal book. It’s personal because this corner of the Eastern Cape is her own ancestral  territory: a scion of the legend-encrusted 1820 Settlers, she was raised here, and her affection for the river, its history and its wildlife sparks through frequently. Often touted as exemplary of the Settlers’ enterprise and tenacity, even moral worth, was Jacklyn’s own great-great-grandfather, William Cock .

Jacklyn’s research forced her to face the dark side of Settler history on two fronts. Firstly, as we have become hyper-aware in the post-1994 era, this region hosted decades of violent occupation and open war, followed by the more covert war of apartheid. The Kowie catchment area had been inhabited, perhaps for millennia, by Bushmen, whose paintings still enliven rock faces throughout these hills, Khoi herders, and at least a century of Xhosa  agriculturalists. Cock economically rubbishes the hoary, self-justifying  myth that the English and the Xhosa arrived simultaneously, and/or that the land was conveniently empty and wild, just longing to be tamed, improved and redeemed from darkness. In fact, of course, the Xhosa were forcibly evicted in successive waves of firepower and disease – our own Hundred Years War.  In this, Cock is drawing on the work of a number of revisionist histories, including Clifton Crais’ The Making of the Colonial Order, Ben Maclennan’s A Proper Degree of Terror, and Noel Mostert’s monumental Frontiers. She draws heavily on the recent work of Julie Wells on Makhanda, the Xhosa leader responsible for the 1819 attack on the embryonic settlement of Graham’s Town (which Cock relates in some detail). William Cock played a crucial role in subsequent military operations and scorched-earth clearances, directly and indirectly by supplying the armies with food and goods – at a handsome profit – so he became Port Alfred’s “most distinguished son”.

Secondly, William Cock was central to the environmental damage wrought by nineteenth-century settler enterprise. Settler firearms rapidly obliterated almost all wild animals, and settler agriculture gradually obliterated most forest and thicket. William Cock’s role was to promote Port Alfred’s ambitions to become a major port by dredging out the mouth of the Kowie, thus altering the flow, and damaging the health of the estuary forever. Jacklyn devotes a lot of space to this effort, and equally to the later great modification of the estuary and wetland, the luxury marina. Local opinion seems divided on the value or otherwise of this modern development, but Jacklyn is pretty clear that both port and marina have proved ecologically unsound white elephants whose flaws have come back to haunt their promoters. Meanwhile, almost entirely unaffected by the marina’s luxurious excess, the town’s black townships remain as segregated, impoverished and environmentally unhealthy as ever they were under apartheid.

The more personalised nature of Writing the Ancestral River has liberated Cock from too rigid a structure, or too academic a style. So she can meander between historical narrative, family reminiscence, and excursions into Xhosa sacred rituals at the Kowie catchment’s deep hidden pools, or the fate of the endemic Eastern Cape Rocky fish.  The detail is impressive, yet it is eminently readable, heartfelt, rich, enlivened by quotations on rivers from poets and writers around the world, scientifically informed yet infused by a note of elegiac lament for all that has been lost and damaged, both natural and human.  At the same time, it is feisty and unflinching. She begins her excellent concluding chapter:

Rivers epitomise the connection between social and environmental justice. Recording the story of the Kowie River involves acknowledging the legacy and continuation of deep injustice: the violent conquest of the indigenous population whose descendants continue to live in poverty and deprivation, on the one hand, and the silting and pollution of a river and the destruction of a wetland, on the other.

No ‘biography’ can be complete, and Cock has validly chosen to focus on certain nodes in the history and nature of a complex catchment area. A still fuller study might have said more about the ancient Bushman presence, or the stories associated with the Blaauwkrantz tributary. She does quote ecologist Jim Cambray to the effect that pineapple farming has done more damage to the river than even the estuary modifications, but gives no further details or tales relating to Albany’s primary crop, nor to the centres it spawned, particularly Bathurst. And given her evident passion and feeling for wildlife, it’s a pity we don’t hear her views on the transference of much of the catchment recently to wildlife tourism or hunting reserves, especially the impact of ‘extra-limitals’ like giraffe and impala which I can see from my own ridgetop porch. But as I say, you can’t do it all.

I do particularly regret the lack of a detailed map or two, so that one could follow some of her winding paths more closely – the omission is doubly odd, given that the edge of such a map appears in the top half of the book’s cover.

These quibbles aside, I recommend this book firstly to anyone interested in the history and ecology of this micro-region, secondly to anyone interested more generally in river health and how this can be viewed through the combined lenses of human social justice and ecological biodiversity. Cock demonstrates just how inseparable these dimensions are: it is simply not possible to pursue capitalistic enterprise and ‘development’ without incurring severe environmental costs, and we ignore these at our own peril. Already up to 60% of our rivers – in line with most parts of the world – are all but fatally compromised by our toxic exudations: mine tailings, pesticide runoff, untreated sewage, silting-up dams, hormonal residues and plastics. We need such biographies of all our rivers, large and small, and we need the ignoramuses in positions of influence to read them, and act decisively in the interests of health instead of profit, sectarian allegiances and self-interest.

Posted by critical diaries at 12:19