Tempe van der Ruit and her husband Doug, residents of Chimanimani, were swept up in the chaos of Cyclone Idai. Here is her vivid and affecting account:

Our poor beloved Chimanimani really got hammered by Cyclone Idai.  It was hard to comprehend how a night of heavy rain could have had such a devastating effect.  The mountain behind our house, called Green Mount, got the brunt of the storm.  In three days we had over 750 mms of rain but the damage was done between eight p.m and midnight on Friday the 16th of March.  We were anxious about the heavy rain, thunder, lightning and wind but the worst thing was the ominous low roar. Doug looked outside with a torch and said the sound was water - sheets of it, flowing all around the house.  Every stairway a waterfall.  He was wrong.  The sound was water and mud and rocks moving.

In the morning all seemed well bar a few trees down in the garden – or so we thought.  But it was not long before we discovered that in fact Chimanimani had been flooded, not only with water but with mud and rocks from huge landslides. Green Mount is etched with red scars on every side.  We were just incredibly lucky.  Our house is high enough to be safe, but every valley had changed into a sea of huge rocks and mud and water.  Any house built close to the valleys was broken or gone, including Heaven Lodge, just down the hill from us (half of it was washed away). Our other neighbour up the valley from us, Joshua Sacco's turquoise house was full of mud with a tree in the sitting room window and a waterfall meters from the house.

Down the road - which we could not use because it was washed away - the poor people of the high density suburb Ngangu had suffered more.  Many many houses had washed away.  And it happened so suddenly in the middle of the night that many were lost and dead, many others were injured.  I cannot imagine how terrifying the night must have been for
them.  I imagine the terrible roar and then add the sound of people screaming.  Folk floundering around in the mud and rain trying to find children and each other.  Others trying to take injured people to the hospital or to the Catholic Church. 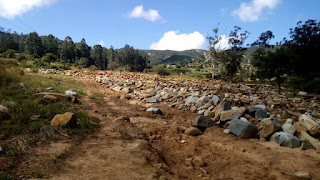 We had no electricity.  Wires were strewn all over the village.  We could not get to visit each other at first as in every place where the roads crossed even a culvert, they were washed away and covered in rocks. Doug's famous video of the road and the golf course strewn with rock went viral.  "Golf course gone!" The phones would not work except at our house as we have a generator and a satellite dish.  The only one working in the village so in no time our house became the centre of communications for everyone. 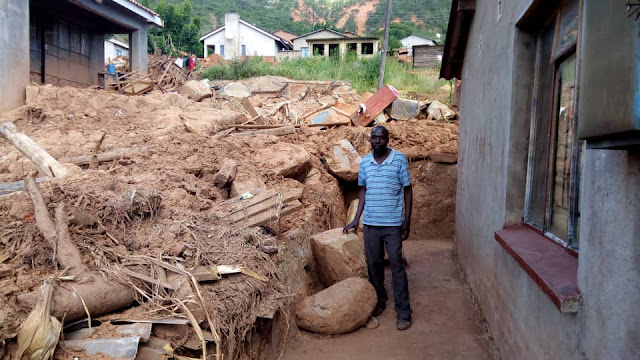 Doug called Bob Henson in Harare; he owns a little helicopter.  The rain continued till Monday when at last Bob arrived in the helicopter and he took Doug to see the district.  More and more bad news came in. Huge floods all the way to Mozambique.  Whole villages washed away at Ndakopa where the Nyahodi River meets the Rusitu.  And terrible damage to all the roads into and out of Chimanimani.  We felt utterly bleak. Shane Kidd opened up his sawmill, helping the people of Ngangu with money to feed the homeless and wood for coffins.  The council managed to open a road between the hospital and the graveyard so that the fifty-odd dead could be buried. It was a strange and terrible funeral.  Just streams and streams of people coming and going and tractors going back and forth bringing coffins. At the same time people were digging and more than one coffin went into each hole.  More died in the south, washed into Mozambique, buried in mud, and many will never be found.

Doug and Bob did what they could bringing in doctors and medicines and evacuating patients but on Wednesday Bob had to go.  Luckily after that more, bigger helicopters arrived.  The support from everyone in Zimbabwe and from South Africa was unbelievable.  Especially generous was Strive Masiwa of Econet.  Doug is a Gideon and it seemed God had prepared him for just such an event.  He knows the names and whereabouts of every single school and clinic in the district and this information was invaluable as he and a group of fantastic volunteers set up a command centre in Mutare to coordinate rescue operations.  Doug loves flying in helicopters but it was an extremely stressful, adrenaline-filled ten days and when he came back he was ready to collapse.  There were also frustrations when operations had to stop for the president to visit.  He needed five helicopters for his entourage. And various generals, colonels etc had to be flown by helicopter into the "field" and often all they wanted to do was to take selfies on their phones of them next to the helicopter in whichever disaster-stricken place they were. 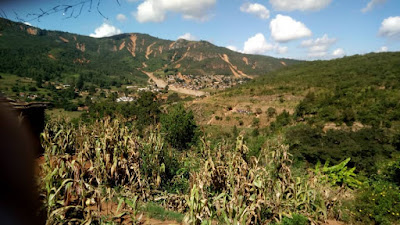 Meanwhile our house continued to be full of people, locals at first, but after a road was opened from Chipinge into Chimanimani, we began to have all sorts of visitors.  Journalists and 4x4 drivers and helicopter pilots. We met many wonderful people but looking after everyone with no electricity became exhausting.  And then the droves of aid organisations arrived in the village, too.  They are still here.  The village is full of tents and big white Toyotas with aerials and about ten different aid organisations displaying their logos on the doors.  The homeless ( hundreds of them) are still living in schools, and the hotel and the club.  They are refusing to move into the tents because they say that the last time the government moved people into tents they never gave them new places to build.  The relocation of all these people is a huge problem.  They don't want to leave Chimanimani but with all the landslides there is no place suitable to relocate them to.

The roads are being repaired slowly.  But all the work we have seen so far has been temporary repairs.  We can even drive down Skyline now which seems miraculous as Doug showed me a picture he took from the helicopter  and Skyline looked like a cliff with a waterfall from top to bottom; where the road was half way down the cliff there was not a sign.  But they (the Chinese?) cut into the cliff and there is a road, though it has tight corners and is not suitable for big lorries. So our sawmilling future looks bleak – besides the fact that the sawmill still has no electricity.  And when it rains the Skyline road is muddy and slippery, not for the faint-hearted. 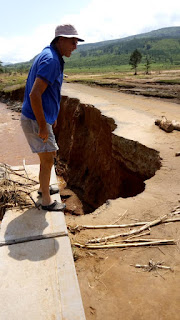 Our friend Daniel came by yesterday morning with his terrible story of Cyclone Idai
He was with his children in the village the week end before the deluge. His 5 year-old son Ian had asked him repeatedly: “Please father can I come home with you ….” And Daniel had replied that only one more week of school remained and he must stay.
On leaving his kids on Monday morning he was oppressed by a terrible feeling of foreboding… Ian only agreed to stay if he was given a loaf of white bread! Dan set off only to find that he could go no further than the clinic. There he sat in a trance till midday.  He berated himself and set off home. At home the confused feeling of doom continued to dog him: he couldn’t do any work, just yearned for his children.
On Thursday morning his wife Mai Yolanda set off to the village with Rob, their 3 year-old son. Normally Rob stayed home with Dan but this time he wanted to visit his siblings in the village.  Mai was going to the village to attend parents’ day on the Friday 15 March. Thursday afternoon it started to rain with heavy winds. The winds continued through the night, taking off our goat house roof. On Friday the wind dropped and the rain came down with unprecedented force. Michael only realised the missing roof mid-morning. Poor goats were huddled in the corner drenched! Fortunately the thatched part of the house remained and he could chase them into shelter.
By Friday morning Dan was overwhelmed by this feeling of foreboding.  He struggled up the hill in the driving rain – there being no signal at his house – to phone Mai to tell her to get the kids and come home now! But he could not get through; he tried without success several times during that fateful Friday. Nine o’clock Friday night: Mai opened the door to find out what the strange noise was. To her amazement cars were floating by. Her last thought was; But there is no road in front of the house! Then a torrent of mud and water poured through the open door, pinning her to the wall and washing the three sleeping children out into the wild night. She was screaming for help when three men looking for their mother came to the rescue. While they were struggling to free her there was a terrible rumble as huge boulders loosened from the mountain started to crash down. They tried to run away. Only one man survived. Yolanda managed to cling to a banana tree till neighbours with a torch saved her and took her to the clinic. All that was seen of Carlos was a hand sticking out of the mud. He was plucked out by a man thinking he had found his son.
The nightmare of that night is difficult to imagine: the wild pouring rain…the darkness…the screaming….the fear as yet another mud slide followed the rocks.
Little Rob was washed in through someone’s window. A woman strapped him to her back as they prepared to flee their crumbling home. By the time they made it to safety the towel and little Rob were gone.
On Saturday morning Dan heard rumours that 2 of his children were missing. He set off to find out what was going on. The rain had eased to a light drizzle by lunch time so Michael let the goats out to graze. Poor animals had had no food since Thursday 12pm. Then Dan came by on his way down to the village and told Michael of the disaster in the village. Dan went to the clinic where Yolanda lay motionless wrapped in a blanket. But she could talk but not move: she had injuries to spine, neck and pelvis. Carlos lay with eyes closed, his injuries unknown. How long can you lie submerged in mud and survive? Dan and a couple of friends set out to find little Rob’s body. Sniffer dogs had identified possible sites near the ruins of his house. The first excavation revealed a broken sewerage pipe, the second a cage with six broilers, two shivering but still alive, and the third dig uncovered a dead dog. Rob’s body was never found. Ian, who had pleaded to go home just that Monday, was found 10km away, quite dead.
The image of Daniel’s kind, gentle face deeply furrowed with much suffering keeps going round and round in my mind. His ready smile replaced by a puzzled frown! I just need to share his story to try and find some peace. Daniel is one of the few people I trust and respect. A man of integrity and kindness. Never one to ask for favours even if life deals him hard blows. Go in peace my friend! 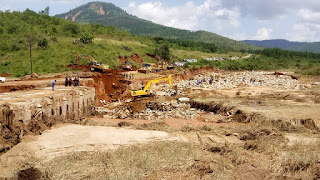 Posted by critical diaries at 18:38