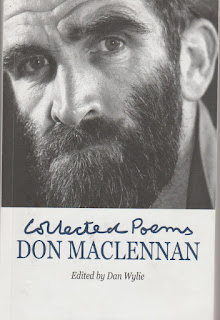 It’s hard to believe that Don Maclennan has been gone for a decade. He would have been 90 this month. As his long-time colleague and friend, Malvern van Wyk Smith, noted in his essay in the volume No Other World, Don grew darker in his vision of the world in his later years, not least in the key volume of poems, Collecting Darkness. Don himself admitted to writing perhaps “too much about death”, though, rather like W B Yeats, he did so from a rather oddly early stage. Later, of course, stricken with motor-neurone disease and seeing his contemporaries dying around him (not least his sister, and his suicidal friend Sammy Lieberman), it would be surprising if he didn’t focus more on the ageing of the body and impending oblivion. Being a troubled atheist confronted him also with a particular kind of existential problem: how – even why – does one create meaning in the face of obliteration?

Re-reading Don’s last flourish of poetry volumes – essentially one a year in his last decade – I’m actually struck by how relatively few poems are directly about death. Far more of them – increasingly brief and lapidary as they became – are about death’s very antithesis: a revelling in the sensual fundamentals of just being alive. Everyday smells, sounds, textures. Again and again, the poems filter this simplicity out of complexities – the entanglements of society, the abstrusities of the philosophers, the echo chambers of other great poets, the confusions of his own self-doubts. At the same time, it is the compulsive questioning which drives him; far from settling into completion or complacency, he kept chewing on all those questions that have no answers. Not least of these is Who am I? This is the poem of that title, from Reading the Signs:

I cannot sieve myself out of my life
as you can sieve sand from water.
I exist for a moment
at an intersection
of time and place
free from gravity.
I cannot throw myself away.
I’ll open the kitchen door
and let in a fresh day.

A problematic is diverted to, albeit never conclusively resolved by, a simple sensory experience.

Though Don did not, as far as I recall, express any particular attraction to Eastern philosophies, there is something like a Zen living-from-moment-to-moment in this, or perhaps of Taoist wu wei, a doing-nothing in a receptive manner that approaches enlightenment. Don’s mind was too restless to leave it at that, though, maybe too self-searching to believe that enlightenment was even possible. His wisdom was the paradoxical one of denying he possessed wisdom. He had to be aware that many regarded him as a guide or even guru-like figure, however much he flaunted his flaws. If the poems are any indication (though I’m wary of reading even such apparently honest poetry as simplistically autobiographical), he became ever more self-doubting, the whole idea of finding meaning receding ever before him.

That word ‘meaning’ arises repeatedly. In the earlier poems there was “an early morning urgency to cram/ meaning into unawakened flesh” (“Adam’s dream”), but this becomes increasingly slippery:

If Cratylus is right
there’s meaning to be found
somewhere, day or night;
but the story of my life
crumbles and collapses
into faulty rhetoric.
(“Letter to myself”)

That meaning was not to be found, he repeated, in Christian ideas of a world beyond death:

To me, that other home is fantasy:
it masks the appalling fact
that meaning’s left us in the lurch.
There is no reason why we’re here
except to keep residual humanity intact,
love women, cherish beauty,
and before we die strive to redeem
our paltriness and lack of energy.
(“Extra ecclesiam nulla salus”)

But it is hard to formulate it in this world, either, since words are so limited and faulty:

Words only point
to the event, and fail.
Their meaning winces
in the rancid aftersmell.

Yet, at revelatory moments,

The word becomes a thing,
a thing a word
burning with luminosity,
as Monet’s light
consumes his canvases.

So one comes back to the sensory and the immediate, modulated by art perhaps, but finally locked into its own glorious and transitory present:

If light shines through
my language now, let me
retrieve its darkness,
thick curds
and clots of meaning,
the smell of smoke,
damp beds of herbs
in the harsh sun.
(“In the peppergrove”)

Mere light and clotted feeling leave the abstraction of ‘meaning’ behind.  I am reminded of a phrase from Russell Hoban’s phantasmagoric novel Kleinzeit: “Meaning is a limit – and there are no limits.”

That’s nice, but if one is to reject any notion of an afterlife, then death, of course, is rather a limit:

I don’t accept that when I die
I go off to a better place:
it is a lie to stop me
living where I am,
to counteract the truth
that when breath stops, I stop.
(Excavations, 30)

into a world of war,
nausea and self-contempt,
knowing that poetry couldn’t
deliver him from death
though it was all he had
to fight it with.

Yet poetry is one way of helping us live more fully in this time, body and world, since there is, as Emerson said, “no other world”. Don repeated this compulsively, staving off the lostness of wandering “helpless/ looking for a rendezvous” that never transpires: very unlike the Zen Buddhist, he felt 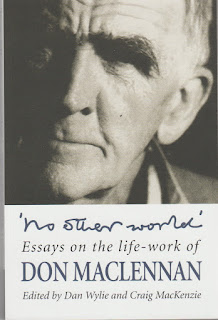 Life is desire,
and the job of writing is
to help us live,
stay clean. There is
no other absolution.

Only the poetry itself will outlive the tangle of blood and temporary nerves that we are. Don Maclennan, of course, is far from the first poet hope for this – even live for it. One can trust only, perhaps, that one does so in a unique way. And I do believe Don did so. It is up to us to ensure that the poetry does live on.

Visit Dan and Jill Wylie for books and art on www.netsoka.co.za
Posted by critical diaries at 22:15