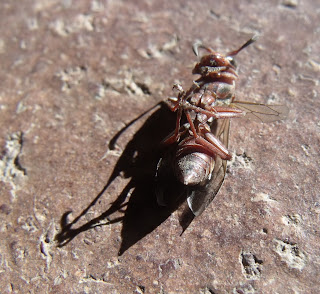 I crouched for twenty minutes in winter sunlight in my back porch and watched a paper wasp die.

It flopped into a channel between floor-tiles and tried feebly to right itself. All six legs and both antennae worked and waved. The sun shone coppery through its almost translucent thorax and fluted wings. It seemed unable even to attempt to fly. It hunched towards its abdomen and half righted itself, then tumbled over again. The legs twitched and signalled directionlessly. Silent. I wondered if at some cryptic frequency of wasp-language it was screaming, or grunting.

The wasp belonged to a colony that has established itself on the upper skirting board of the porch, not a foot from my washing-line. Two summers ago they began, starting in this quite undistinguished spot with a single little aerodynamic peg or stump, from which the whole edifice would thereafter hang. It would grow outwards into a broad, patty-shaped flange, a shelf of ranked cells, almost as clearly hexagonal and precisely arranged as a honeycomb. Over its surface an increasing number of wasps busied themselves raising the brood in their snug silos, crafted from chewed wood-pulp and saliva – a library of wasp-genes. On a rough count, in the end, some 300 of them. Somewhere among them, a queen was laying her eggs and chaperoning love affairs.

How did they find food? – mostly caterpillars they would immobilise with a sting, munch them up, regurgitate them for the larvae. Which would in time burst through the grey caps of their chambers, shake out their damp and crumpled wings, and fly off, just like that. Navigating, hunting, nurturing, collaborating, obeying mechanisms of instinct and divisions of labour from the very first day. The under-surface of the brood building would be wall-to-wall with reddish, energetic parents – the early ones sterile females, the later ones fertile males and females. In all this activity, how would one distinguish between automatism and choice, between instinct and loyal altruism? Why would one think altruism and a moral sense is confined to humans?

Most of “The 300”, no doubt, would be picked off by birds somehow insensitive to venom and crunchy shells. Some might just get lost. Some would manage to establish new colonies elsewhere. Some would remain, even after the last larva had hatched, a skeleton crew of guardians on the edge of autumn, females wintering over in the tubes of flowers.

This little individual, maybe a male dying after fulfilling his mating duties, was wrestling futilely with its own demise. Its leg and antenna movements were growing weaker. Getting off its back now seemed beyond it. It once curled its greyish sting-tipped abdomen convulsively skywards; I wondered if this was the equivalent of a person turning up their toes. I momentarily contemplated killing it quickly, mercifully ‘putting it out of its misery’. Does a wasp feel misery? Does it possess either more or less consciousness than a fish or a tree, a human or a stone? What could it be struggling for, if not some imagined prolongation of a treasured life, if not begging for help to stave off the slow petrification of its systems? Having observed all the wonderful complexity of its lived experience, it seems simplistic and demeaning to reduce it now to the involuntary twitching of an autonomous nervous system.

I wondered if this – he – was one of the guardians of the previous brood. Exactly a year ago, in the winter of 2020, a baboon, openly defying all Covid-19 restrictions, raided the porch, managing to leap from the windowsill and knock down the wasp-house (by then as broad as my palm). Hoping, I suppose, to suck up any last remaining larvae in a lean season. I picked up the discarded nest: so light and papery, yet so sturdy, honed to purpose, still vulnerable to massive external forces such as a simian paw. So it goes in all the world: all you’ve worked for, perhaps over generations, all you’ve lovingly built, beggared yourself for, invested your identity in – smashed to smithereens overnight by a riot or a flood. What, realistically, can one hope for but to have lived one’s brief span with some usefulness and beauty? 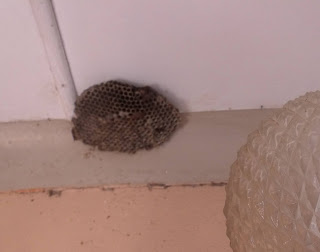 Anyway, this nest was no more, a husk. I thought, Okay, I’d never been totally comfortable with a horde of vicious stingers so close to the washing-line. They, for their part, would turn head-on and flutter their wings rapidly in warning or horror when approached too brusquely by a wet pair of underpants. But I would sing a phrase to them, the way my mother used to calm wild bushbuck with a musical phrase. Do they even hear, and if so, what, with what interpretative equipment? In any event, they never once attacked me. (Unlike another lot above the studio door: there my head was passing too close and too often for comfort, and they delivered a few hearty stings before I had to destroy the nest.) Though the porch tribe had been pretty chilled I thought, Right, this is a good opportunity to just fob off this colony, too; after all, there were a hundred other overhangs to go to. So I scrubbed off even the last vestige of the anchor-stump and sprayed the lintel for good measure. This, in my experience, was always sufficient to dissuade them from returning.

Not this time. A couple of stragglers I waved away and dusted with chalk and pepper, trying to explain that they were welcome to build, but not there, okay? But throughout the winter, just two or three wasps kept coming back, exploring, almost caressing the very spot where the stump of the former construction had been. And in spring they began a new one, a yellowy waxy pedestal, and soon enough a few whitish brood chambers. This, it seemed, was home; they had perhaps been born here, their metaphorical umbilical cords were buried here, and they would accept no other suburb. The queen hath spoken. Oh-kay, I sighed, stay then. Just don’t sting anybody. They haven’t. Yet. I, and my wet underpants, are apparently acceptable and accepted. I have to play my part, of course.  As with almost anybody else in the animal kingdom, accord them sufficient social distance, approach with gentleness, grant them their dignity, and there’s usually no problem.

This chap, the last of the year’s guardians, was weakening yet further. The movements of legs and tiny curled feet 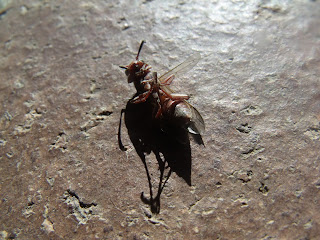 lessened, becoming ever more tentative and aimless. Unless one has the (mis)fortune to be nipped out by a flash-flood or a shrike, a baboon or an infarction, this is the way it ends for most of us, I guess, bodies gradually crumbling to arthritis and sclerosis, eaten out from the inside by cancers and dementia. We want to afford our own kind the opportunity to die in their own time, in a warm space, with courage, watched over however distressingly by family and neighbours – why not this one, little brother wasp?

When the faint signals and tremors of feet and, last of all, the antennae had finally stilled, I laid the little corpse on a pretty flake of stone, to be carried off by a raven’s bill or a gust of July wind, to reintegrate into the ecosystem from which it was built.

Dan Wylie's new novella, THE FLIGHT OF THE BAT, available soon from d.wylie@ru.ac.za

Posted by critical diaries at 22:09