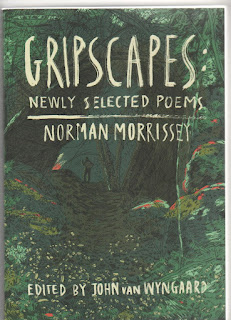 For three decades the Eastern Cape’s Hogsback mountain village has harboured a periodically shifting but indomitably productive group of poets. Founded in 1988 as the Echo Poets, they became the Ecca Poets, so-called after a rugged local pass. Some, like Brian Walter, Mzi Mahola, Lara Kirsten, and Cathal Lagan have moved away from Hogsback but continue to contribute; some have left the coterie altogether, some stayed – notably Silke Heiss –  while younger ones have joined more recently. Year after year, the group has published collective volumes, as well as numerous individual collections on their own accounts. It is a truly remarkable bunch, producing a broad swathe of very good poetry (I have written more academically about Walter and Mariss Everitt).

A stalwart of the Ecca group over the years was the late Norman Morrissey. Like most of the members, I met him now and then, usually at poetry readings, and came away with the impression of a bustling intelligence, a bluff directness, a sturdy bonhomie. All of that I think is evident in the poetry included in this new substantial volume, Gripscapes, collected posthumously by Pietermaritzburg academic John van Wyngaard, and rather courageously published by Jim Phelps’s Echoing Green Press.

As the slightly unusual subtitle, Newly collected poems, might hint, Gripscapes is a rather odd enterprise. As if Morrissey’s published volumes were not enough to cement his reputation – particularly his own last selection, Strandloop – van Wyngaard has devoted a good deal of academic sleuthing to unearthing more poems from archival material, hundreds of letters written to friends and lovers, sundry notebooks, and the annual Ecca collections. So he includes no poems previously gathered by Morrissey, but does include some published by Ecca, and a large, hitherto unseen number which Morrissey never intended for publication at all. As I learned from trawling Sydney Clouts’s manuscripts, avid for undiscovered gems, this can involve a plethora of judgement calls. Among these are degrees of ‘finished-ness’, and in the case of the letters, matters of privacy (even where the letters were willingly surrendered by the recipients). Van Wyngaard is sensitive to this, and says in his compact foreword that he excluded material that was explicitly “personal”. While right and understandable, this runs the risk of skewing our impression of Morrissey’s range, of confining us to the editor’s view of significant themes and quality. I also wonder what “personal” means exactly (lovers’/partners’  intimacies, one is obliged to guess), since there is little that isn’t personal here: the poems are, as Morrissey averred more than once, his “autobiography”, and thus inevitably private in some sense. He isn’t one to be “embarrassed by tenderness”, to borrow his own phrase.

Anyway, here it is: over 200 poems, mostly punchy and short, arranged in strict chronological order (almost all datable to the day, such was Morrissey’s habitual precision). Three sections reflect Morrissey’s life and careers. The first section covers the years 1979-1983, when Morrissey worked with the Natal Parks Board, grounding him in an observant reverence for the non-human world that never left him. The second section covers the years 1983-2002 as he taught at Fort Hare University in Alice, bringing in a wide range of literary reference. This is seldom pretentious, even in the many poems that carry the kind of informative and philosophical air of a compulsive teacher. The third and final section covers the “Hogsback years”, 2003-2017.  What all this evidences is a phenomenal energy and enviable discipline: van Wyngaard estimates that Morrissey produced a poem, on average, every six days – not counting drafts, redrafts and incomplete sketches. Over 40 years, that’s a very considerable body of work. Most of the pieces included here are characteristically sharp and short; a minority spread to more than a page. The decision to stick to chronological order (combined, I suppose, with economic constraints), means that many poems are carried across a page-break, with the consequence that non-stanza breaks have to be distinguished from stanza-breaks (coded where needed sb), and some sadly ‘widowed’ lines. Also slightly cluttering on the Contents pages is the scholarly finesse of identifying the multifarious sources with three-letter ‘codes’ next to the title, referable to a key; those pages resultantly look a bit like a Sanskrit shopping-list. But these are minor quibbles about a somewhat crammed and shaggy feel to the layout.

As for the poems, they can be a bit shaggy, too. It’s in the nature of such ‘informal’ writings to feel often more like ‘notes towards poems’, but even in pieces that Morrissey approved for publication, I’m often reminded of Michelangelo’s unfinished sculptures at the Uffizi, an arm or a shoulder of high polish and definition emerging from the powered chisel-marks. Short, crisp lines suddenly fly off into one so long it has to be run on; a line of fabulous lyricism will abruptly stumble into another that’s puzzlingly clumsy; a disarming, transparent directness is sometimes punctured by a usage straining after poeticism. Indeed, he believed poetry should be different from loose and everyday speech, tighter, more startling, even though he regularly courted the chatty. So in some ways the poems are the chisel-marks – poems about working at poems.

Still, while probing and ever-thoughtful, the poems are never difficult in the way of post-Eliot Modernism, or elusively strange like Kobus Moolman, or mellifluously lyrical like Stephen Watson, or archly compacted and demanding like Peter Anderson’s latest volume In a Free State. Nor does he venture towards the controlled versification of, say, a Yeats (whom he admired) or a John Eppel.  In his mode of free verse (there is little formal variation from beginning to end), Morrissey muscles and shoulders through his poems, robust, open-faced, wholly un-mysterious. Sometimes I feel the end of a poem is unnecessarily blunt, like the closing bar of a Beethoven symphony; he is not one for leaving a lot to the reader’s imagination. It’s characteristically a poetry of assertion: even when he’s expressing doubts and self-deprecation, he manages to do so assertively.

Among Morrissey’s strengths for me is the intimate attention he paid to the tiniest objects, such as a miniscule insect interacting with a droplet sliding down a beer-mug. He applies this attentiveness – surely the foundation of love of the world and its denizens – to an extraordinary range of subjects. Little escaped his gimlet eye, whether beautiful or grating – the movement of a cat, a student waiting at an ATM, a tortoise, micturition, surfing, getting sick and ageing. The resonant title Gripscapes encapsulates it: he seizes the world and its intricacies with a fierce and compassionate  absorption. He seems to have had that facility to translate every and any mundane event in his day into a meditation and a poem – “moralizing in happy madness”, as he lightly scoffed. The ordinary is often catapulted into greater significance by a deep awareness of evolutionary heritage, of us little humans being mere fragments in the vast swirl of history and the cosmos. There’s something of this in one of his sweeter poems, “Wind”:

hungry, sick at the smell of food,

heard you sidling about,

snuffing at this curious shell

just crept from the sea?

Rare in ending with a question, this poem otherwise is representative of Morrissey’s approachable lucidity and raw honesty, his propensity for new coinages (firstcomer), his at times idiosyncratic, but never gimmicky, use of line-breaks and spaces. At one end of his spectrum he can drop lines and images of wonderful lyric surprise and accuracy – “a prowed heron rocked down to roost”, “that kingdom-withering sun”, “the inhuman clench of wasting bones” – or of sympathetic feeling; at the other he can be scathingly satirical or touchingly funny, as in “Highway Blues”:

and slowly get treads on ’em.

Above all, as van Wyngaard points out in a useful closing essay, Morrissey compulsively mused on the art of poetry itself, its provenance, its craft, its ultimate meaningfulness. Poetry was not so much a retrospective expression of his engagements with the world, but his ever-present means of engagement, of literally “grounding” himself. Poetry was and is the cornerstone of an “independent self-sovereignty” he craved or defended, even as in old age he felt himself begin to crumble and fade. Yet, for all his fierce devotion to the only activity liable to outlast him, he had no illusions about its fragility: just as he himself is a “tiny inwhirling eddy”, a poem’s “just a kick at the wind”. For all his bluff assertiveness, he was persistently self-deprecating: his “ideology” he summed up in “one line:/ I’ll never know much for certain about anything/ at any one time.”

One thing he seemed sure about: the critic is “just a tagger-on/ at the elephant’s tail”. I suppose that means me. Best to move on and just read this multitudinous volume.

Posted by critical diaries at 11:47