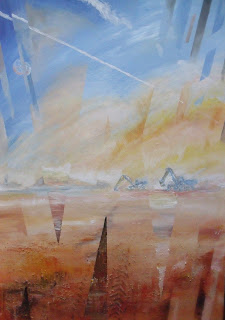 It’s evening on World Environment Day. It’s damp and windless, and I’m taking the opportunity to incinerate some old papers and other detritus that need not end up in the already overwhelmed and ill-managed city dump. I also sense waves of another burn somewhere – perhaps the distant dump itself – more toxic than mine, making my eyes sting. A neighbour starts up a car, then sits idling while conducting a lengthy conversation, a miasma of carbon monoxide washing over my cottage. Closing the windows is little help. Then I pack another black plastic bag with yet more rubbish, unburnable and unusable and unrecyclable, to be taken to the aforementioned dump. Some of this trash is ancient, hauled out of the forest below me, where decades earlier an auto-mechanic’s business here had simply shoved down the hill all its residue, from whole car wrecks to beer bottles. Then I go inside, take juice from the humming fridge, turn on a couple of lights, put the kettle on, fire up this laptop. Each step – though I’m partially independent of the grid – consuming a little more power supplied by invisible coal- and oil-fired generators. So we go, each of hundreds of millions of us, contributing to the destruction of our beautiful and only planet and home.

Enough self-flagellation, which is as useless as doing nothing. It seems overwhelming, but we do what we can. Some can do a bit more than others. I am led here to reconsider the work of our own fine poet, Douglas Livingstone, who saw all this coming thirty and forty years ago. Born in Malaya in 1932, he qualified as a microbiologist. After a stint in the government laboratories in Salisbury, in the then Rhodesia, he forged a long career measuring pollution levels at a series of coastal stations off the KZN coast. All the while he was writing poetry, dense and accomplished and voluminous, as attested by the now-standard collection, the 560-page A Ruthless Fidelity (edited by Makhanda’s own Malcolm Hacksley and the late Don Maclennan). That title, culled from one of his poems, neatly encapsulates the incisive, truth-seeking attention he paid to the world around him and to the craft of poetry. For this he was seen as easily South Africa’s most substantive poet, winning the CNA Prize for his Selected Poems in 1984. The range of subjects, verse-forms and voices is formidable, his output hugely respected if not universally liked. Lean, tanned and forthright, he exuded a swashbuckling air of sinewy machoism; some feminist readers have detected a certain misogyny lurking in his oft-expressed adoration of women. He died suddenly of stomach cancer in 1996.

In his final volume, A Littoral Zone, Livingstone wrote poems based on the string of “stations” down KZN’s South Coast where he spent years monitoring pollution levels along the shoreline. It was, he admitted, a Quixotic quest, but he felt he had to do it as part of healing the environment in the face of relentless human assaults. The assaults he unsparingly describes range from the gratuitous injury to individual animals – a turtle, a dolphin – to the pervasive scattering of trash. In the poem, “Reflections at Sunkist”, the poet is numbed by the scale of it:

Among the paper cups, the empty tins,

glittering on the sand; a silver slice

of broken mirror probes my brain with ice.

The shard placed in one of the refuse-bins

among Monday’s debris from Sunday’s crowd.

I try to face the shattered sea uncowed.

Debris recurs at a literally industrial scale, as at an abandoned whaling station, now “ship-wrecked:/ corrugated roofs, zinc walls flaking;/ most of the cataracted panes smashed,/ .... the sand still tarry.” Floods from inland bring down more junk: “debris heaped higher than two men/ ...whole swathes of riverbank,/ shreds of homemade dwellings, furniture, sheets of tin ... Donkey carcasses”: all “choking the coast for leagues.” This poem, “Scourings at Station 19”, then focuses on one “roughed up bantam”, shouting defiant life from a peak of rubbish, a reflection no doubt of Livingstone’s own rage, insisting on his “fractious challenge” and quixotic persistence against daunting odds: “life/ triumphs even on no longer trusted planets”. In contrast, in “The Christmas Chefs of Station 1A”, the “mess on the sand” left by people is “incredible”, forcing the poet close to despair:

The approximation to justice,

the perfectibility of man,

the conservation of beauty,

the final attainment of truth

are salients that ever evade us.

Perhaps nothing is more poignant than a poem, not published in Livingstone’s lifetime, describing a human foetus washed down to the sea through the sewers, probably destined to become shark food. A vast cultural crisis lies behind that one little lost life. Indeed, sewage constitutes one of the worst-managed and most intractable aspects of the national reckoning with self-pollution. Livingstone doesn’t shy away from this grimy topic, though in “Guess Who?” he masks it in sardonic humour:

On an ivory throne this thoughtful species

Sits reading Origin of the Faeces,

Where there ain’t no flippin’ Water Act –

That “thoughtful” is of course deeply sarcastic: this pooping character is doing what most of us do, which is precisely to avoid thinking about the issue, resort to escapism, remain content with immediate pleasures. Humans, Livingstone intimates, may be clever in some ways – he valorises science as one route to the greatest truths – but this is tempered by the thought that it is precisely our cleverness, especially with technology, that has spawned the current mess: “It is as if intellect is the ultimate/ polluter” (“Under Sentence”).

If floods wash bodies down the rivers to the beaches, the sea also delivers up anonymous corpses. In “Cells at Station 11”, Livingstone queasily notes that the sample he collects in his little bottle might well contain cells from a “blackened corpse” floating offshore. This provokes a rumination on how everything is interconnected at the level of cell components, from mitochondria to galactic dust; each of us is hardly a “self” at all, but a constellation of millions:

a fifth column of DNA

Or, as he described less scientifically in “Problems of Soul”, an imagined Chinese lad’s “last spring onion ... contained an atom of Chaka’s,/ two from Ben Jonson and one whole molecule/ that had vibrated unseen in three generations/ of plumply biceped Moscow charladies.”

Livingstone is jokey here, but time and again he returned to this sense of “shared cells” and interconnection, which means a shared destiny on a planetary scale. Though some hardy scientists express doubts, Livingstone embraced James Lovelock’s depiction of our isolated world as an all-but-conscious self-regulating organism that actively, or in effect, promotes conditions for life to flourish. He called this ‘organism’ Gaia, after the Greek goddess, a move that appealed to Livingstone’s desire to marry science, poetry and myth. That humanity has willy-nilly worked its way into threatening the very fabric of those life-systems is terrifying.  Livingstone painted a grim picture of our destiny:

We’re presiding over our own destruction. We spew into our atmosphere the climate-altering pollutant, CO2. The consequences? We’ll see increases in extreme weather conditions, more allergens, decreases in food production, increases in food- and water-related diseases, decreases in coarse-grained crops. Added to climate change, we have other human-related impacts on the planetary ecosystem. Deforestation. A combination of acidification of the oceans and the warming of seawater will lead to a loss of fish, coral reefs and biodiversity. ...[A]ll this will lead to displaced populations, conflict over scarce resources and wide-scale social breakdown. ... I can visualise a world of isolated fortresses of scientists, medics, antibiotic factories, blood transfusions, transplanted organs, the pursuit of immortality, special foods and so on. Well-armed fortresses, protected by lasers, or worse, and vast plains between the fortresses of struggling, copulating, breathing, choking, starving, dying, diseased human beings, launching their futile attacks on these privileged excrescences.

Darwinian and hyperbolic, perhaps, but also prescient. Depressingly, forty years later, the warnings from scientists remain much the same, and Livingstone’s scenario is unfolding before our very eyes.

He foresaw, too, our accelerating drive to conquer even other planets. In a poem grimly entitled “Beware of Man”, written “Lest we forget and lose our human shame” – our destructiveness exemplified by the Nazi Holocaust – he warned:

Now swift we stride towards the lonely star,

Our rocketry strives outwards and the race

Is proud for planets and new worlds afar

While missiles watch, each poised, a lethal spar.

The Bane of Earth now strops his knives for space.

In banks of radioactive dust I lie

To dream of Earth that was not always arched

In several less fantasial poems he envisaged bleak and damaged futures in the here-and-now. The levelling of a forest by merciless men described in the poem “A Death of Green” stands as exemplary of a mindset by which “A web of humankind [will] but accrue/ A legacy of dust, and no more green” (“Premonition”).

Not only do we unthinkingly pollute our ecosystems and blindly kill off other creatures, some of us go so far as to deliberately kill those who try to protect those life-systems. I want to slip in here a lament and tribute to the late Jeff Budaza, who was recently assassinated on his own Makhanda doorstep. Communitarian and parks manager for years, Budaza and I met only tangentially a couple of times, momentarily remarked on our common Rhodes University experience and issues on the Commonage, but he struck me as eminently pleasant, committed and sane. But being a good person, and in particular a compassionate protector of our environments, can be tantamount to a death sentence. Not just here: it afflicts community protectors from our own threatened Wild Coast to the Amazon, from journalists in Palestine to feminists in Mexico. So much myopic hatred everywhere, only making it worse for everyone. I want to write a poem addressed “To an Assassin”, but suspect it would be unprintable. RIP Mr Budaza.

Livingstone was onto this surfeit of hate, too, but also had a method to cope, exemplified in his work:

first, the detection of ills which becomes

find & measure the ills first, others

can heal with stature, exhortation,

One has to hope. The paradox is that humans also care; somehow evolution has also opened up compassion. Livingstone cared, revelled in life, and worked to protect it. This partly why Makhanda’s own Mariss Stevens, in her excellent MA thesis on Livingstone’s ecology, calls him a “Romantic materialist”. So must we all care, or be lost. At any rate, Livingstone elsewhere recognises, or hopes, that Life – Gaia, Nature – will in the long run outlast and survive us:

Its choice is plain: kill or be killed.

Ours too: symbiosis or death

at the hands of a bright blue cell

- the only living thing in known space.

For more books and art, go to www.netsoka.co.za

Posted by critical diaries at 22:18