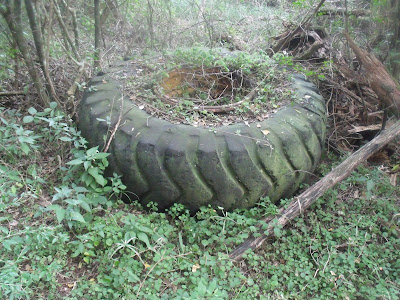 I can imagine the scene.  The boss is away in town, his young son is momentarily in charge of the workshop perched on the side of the hill.  He and the equally boyish workers combine in an unusual  spasm of communal hilarity.  It takes four of them to hoist the massive tractor tyre, nearly five feet across, upright, and to roll it slowly through the double doors at the back of the building.  For a moment it teeters on the edge of the concrete ledge; they give it a last concerted heave, and it bounces down a short slope, across the grassy terrace, and disappears over the bank.  The boys whoop as they listen to it crashing down and down through the forest, smashing yellowwoods and draesena palms, sending robins and louries startling into the air, setting even the baboons on the next ridge barking in alarm.  Then silence.

The lads high-five triumphantly and turn back inside the oily booming barn that houses Ocean View Motors, to decide what to do with the rest of the tractor.  Most likely, once they’ve stripped it of useful parts, they’ll shove the wreck into the bush somewhere, too, as with other carcasses of worn-out Holdens and Morrises and Mercs.
I imagine this all happened the same day as I was born, a thousand miles to the north.  It’s at least possible, since the lid of the dustbin I inherited from the workshop and still use today is stamped with the year of my birth.
And the tyre is still there, a hundred yards down the hill from my flatlet attached to that same, now empty, workshop. 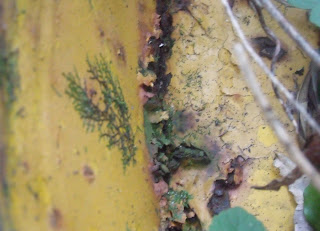 “The abandoned car body rotting quietly in the landscape is alive with the activity of corrosion, it’s become a habitat, it looks perfectly at home, it’s both organic and machinic.  The shifting and contingent meanings for waste, the innumerable ways in which it can be produced, reveal it as not essentially bad but as subject to relations.  What is rubbish in one context is perfectly useful in another ... disenchantment stories deny the complexity of waste...”

That’s from Gay Hawkins’s provocative book, The Ethics of Waste.  One of our Master’s students is also working on a literary angle to waste, focusing on American novelist Don DeLillo’s gargantuan, sprawling, bewitching work, Underworld.  This teeming, Dickensian novel is largely populated by characters who work in the USA’s massive waste-disposal industry: a landfill designer at Fresh Kills, New York; a painter turning discarded B-52 bombers in the Arizona desert into artworks; a restaurant owner dumping excess food.  Nuclear waste seethes in secretive silos; a freighter loaded with toxic sludge wanders the world, rebuffed by every port.  All this, in DeLillo’s depiction, constitutes the underworld of our modern, shiny, capitalist enterprise, our adoration of machinery and bling – junk everywhere, threatening to overwhelm us.

One of DeLillo’s waste-disposal characters is Nick Shay, who deals with, amongst other stuff, radioactive waste.  Of burying nuclear waste in a Mesozoic salt-bed in Texas he says:

We were waste handlers, waste traders, cosmologists of waste. ... It was a religious conviction that these deposits of rock salt would not leak radiation.  Waste is a religious thing.  We entomb contaminated waste with a sense of reverence and dread.  It is necessary to respect what we discard.

No respectful religious fervour amongst my imaginary tractor-tyre boys, I warrant.  But DeLillo seems to be saying that if we don’t learn to re-value our waste, we will likely be buried by it.  Many creative people turn waste into art these days  And of course the poor have always valued and re-valued waste.  Most of ‘my’ car-wrecks have been hacked up and carried away on donkey-carts to be sold on into the Far East’s scrap industry. 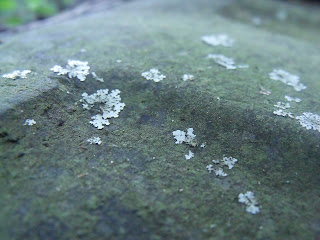 But – along with the bits of rubber door-linings, the broken glass, the twisted shards of chromium fenders left behind – that tyre is still there.  With its robust metal hub, it probably weighs half a ton.  One would have to carve a whole road through the forest with a front-end loader, uproot a hundred trees, to get it out again.  It is destined, in short, to remain there forever.

With Hawkins and DeLillo in my mind, I look at it again.  I sit and just watch the sun-dapples shift across it as the day rotates above the thirty-foot treetops.  It may not look “perfectly at home”, in Hawkins’ phrase, but it has certainly become a habitat.  Half a dozen different species of plant have taken root inside its hub, each with its differently-shaped leaves.  Some have the tiniest mauve flowers, around which flit a couple of interested butterflies, nondescript brown until sunlight sparks a royal purple sheen off their forewings.  Tiny reddish ants, translucent in sun, are journeying purposefully back and forth along the stem of a creeper with trifoliate leaves that hugs the tyre’s edge.  On rhoicissus leaves nestled against its side, caterpillars are designing new Le Mans racing circuits with their jaws.  And in the two-inch wide chasms of the tyre’s treads, miniscule spiders have engineered their webs and snares; one has already wrapped in silk some unidentifiable prey, probably an embalmed larder for its eggs. 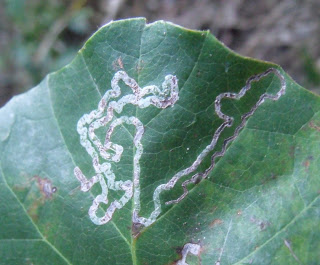 Brown-and-white droppings mark the tyre as a staging-post for certain birds.  And it’s a handy perch for a fastidious cat.

And there are still more subtle inhabitants.  Multiple species of mould breed in the slushy leaf-litter, vital fungi that will serve to transport fluid from earth to roots.  Even on the orange paint of the hub, algae have established tiny unexplored continents of green.  Little rosettes of blue-grey lichen fleck the rubber surfaces.  And some kind of moss has found congenial the miniature pits in the rubber, frosting almost the complete tyre with a patina of luxurious green.  Were it not for the unnatural symmetries of the treads, the thing would look almost like it belonged.

Another odd thought occurs.  Unlike other loose tyres I’ve found in the forest, this one’s still locked to its hub, and so cannot harbour rainwater, breeding-ground for mosquitoes and sundry other creatures.  Perhaps it’s still full of air.  Perhaps that air is as old as I am: fossilised breath.  Stashed in the hub are some old bottles, green beer-dumpies – and also a small pharmaceutical phial.  It’s slightly distorted, as if it had been blown by hand; there’s a smudge of russet residue of the original contents in the bottom; and its screwtop is still solidly sealed.  Maybe it, too, contains air from the year of my birth.  What would happen if I opened these decades-old vessels, and gulped their contents?  Release into the world some lethal toxin we are not ready to fight?  Or might I regain the youthfulness of my own first breaths? 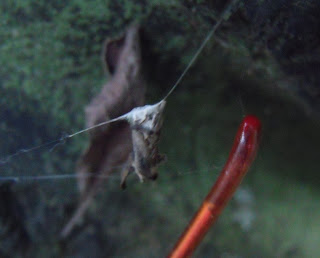 The tyre’s foreignness still bulks ineradicably in my mind.  There is no embossed writing on it to identify its maker, but it could be, say, Massey-Ferguson, or Dunlop.  I wonder, then, about the origins of its components: steel from Pittsburgh for the hub; rubber from Brazil; chrome oxide in the yellow paint mined in the Congo; lead from Canada.  My forest has been internationalised – but is also re-wilding and re-valuing the invader.  Nothing will be quite the same as it was before, but the natural processes also move on, enveloping it, just being themselves.

We can no longer be complacent about the effects of the waste we daily generate.  I am suspicious of the retort that “Nature will eventually take care of it” – that’s an ethical cop-out.  But in this case?  Nothing to be done, really.  I call the cat, and we head for home. 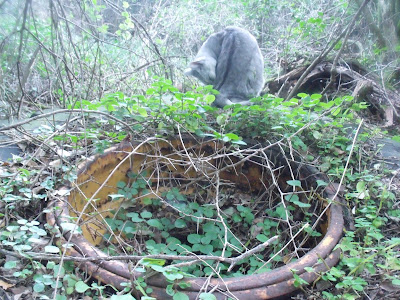 Posted by critical diaries at 15:00