In preparation for an Honours course, I am re-reading Dante Alighieri’s astounding epic poem, the Commedia Divina, in which Dante depicts himself visiting Hell (Inferno), and eventually Purgatory and Paradise – the archetypal religious journey.  I’ve taught Inferno before, but it feels like a new piece every time.  Partly that’s because it’s so complex and layered that I forget a lot of it, and partly because I keep reading new translations, each of which feels quite different.

The edition I’ve set this time is a wonderful compilation of various poets’ versions, including such luminaries as the late Seamus Heaney, Sharon Olds, W S Merwin, Amy Clampitt, and others, edited by Daniel Halperin.  So every couple of cantos, or chapters, you encounter a subtly different way of dealing with the compact resonances of Dante’s fourteenth-century Tuscan.  Some try to follow the tight interlocking rhymes of the original; others adopt more free-flowing ways of capturing the vivid drama rather than a more literal rendition.

Because I’ve lately become more attuned to animal presences in all kinds of literature, I started noting the quite numerous animal references in the Inferno.  There is lion and leopard, elephant and whale, donkey and horse, frog and mouse – even a falcon losing touch with its falconer (the source of the image in W B Yeats’s famous poem “The Second Coming”).  There are real animals and allegorical animals and wholly invented monsters like the dragon-ish Geryon, who grudgingly carries the pilgrim Dante and his guide Virgil down the cliffs of Hell’s seventh circle.

And quite a lot of dogs.

What are they doing there?  What can we make of Dante’s underlying attitudes towards animals in general, and towards dogs in particular?  Apart from certain specific instances which every critic comments on, the question doesn’t seem to have been thoroughly studied since  Richard Thayer Holbrook wrote his book Dante and the Animal Kingdom – in 1902!   Though he feels a little dated, Holbrook is richly informative.  In his view, by the 1300s in Europe

the few approaches of Aristotle and some other great minds of antiquity to a true knowledge of the animals were almost forgotten, or converted slowly into fabulous shapes by fantasies unchecked by observation, by a credulity without bounds.

Hence Dante had a long history of fantasy on which to base his monstrous creatures in Inferno.  This was intensified by a theology that denied animals souls, intentions, capacity for abstraction or reason – that which distinguished humans from ‘lower orders’ and gave them access to God.  As for the animals themselves, Holbrook says,

their existence interests him only in so far as it furnishes him with imagery to make us comprehend the actions of men, of devils, and of angels, or in so far as the animals furnish lessons for the guidance of man.  He neither loves nor portrays them wholly for their own sake.

Dante, like our own Shakespeare, had small fondness for dogs.  The great intelligence they often possess, their loyalty even to a bad master, their obvious delight in kindness, their gratitude, their histrionic qualities, their wistful interest in human affairs – not one of these qualities appealed to Dante.

Almost all the associations are negative.  The first canid the pilgrim Dante (he is the main character in his own fiction) encounters is a she-wolf which, along with a lion and a leopard, harries him to the edge of Hell itself, where the ghost of the Roman poet Virgil begins his role as guide.  The wolf is usually interpreted as representing the carnal appetites: she is “so thin she looked/ as if all her appetites were gnawing at her”.  Virgil explains:

Because this animal you are troubled by
lets no man pass but harasses him
until she kills him by her savagery,
And she is so consumed by viciousness
that nothing fills her, and so insatiable
that feeding only makes her ravenous.
There are many animals she couples with
and there will be more of them, until the Hound
shall come and grind her in the jaws of death. (I. trans. Heaney) 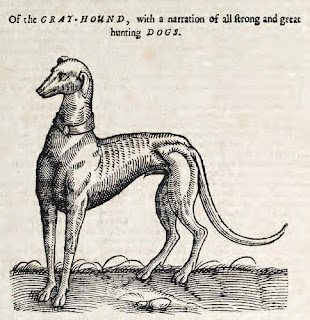 One canid overcome by another: in the Christian narrative, unbridled carnality will be eventually banished by the apocalypse and the Final Judgement.  This “Hound” is usually read as the “Hound of Heaven”, a precursor of the Second Coming.  Dante’s word is veltro, which is a boar-hound, something between a greyhound and a Great Dane, used by the aristocracy for hunting.  While Dante may have had the real veltro in the back of his mind, this Hound is, as Holbrook says, “denatured by excessive allegory”.

This kind of divinely vengeful hunting-dog motif is repeated in Canto XIII, where Dante finds himself in a forest, whose branches are actually the transformed bits of human suicides.  Weird!  It’s also a good venue for hunting, and sure enough along come hurtling two misbegotten souls with a “roar ,/ Such as the hunter hears when he keeps his stand,/ hearing the wild boar and the chase itself” and “Behind their backs, the wood was growing full/ of black she-dogs, as eager and as swift as greyhounds just unfastened from their chains” (trans. Charles Wright).  The dogs tear the miscreants apart and carry off their dismembered limbs.

So in this phantasmagoric terror-scape the dog images are derived from real life but are given religious symbolic meaning, too.  Dante had also obviously taken note of dogs in the streets of his native Florence and other towns he was exiled to.  Some people kept guard dogs, so at one point Dante describes the pursuit of a guarding devil: “never was a dog set loose/ in such a hurry to catch a thief” (XXI).  Indeed, a couple of these rather comical devils are compared to guard-dogs, being named “Dog-Face” and “Dog-Scratcher” (or “Dog-Grabber”).  This echoes the earlier depiction of Cerberus, the guardian of the third circle of Hell: this three-headed monster out of Greek mythology barks dog-like from his three throats, presiding over tortured souls who themselves “howl like dogs” (caninamente, in Dante’s coinage).  Virgil distracts the monster by flinging gobbets of mud into its gullets: “Just as a dog which yelps when it craves/ becomes quiet when snapping up its food,/ straining and battling to devour it” (VI), Cerberus is momentarily subdued.

Unlike the hunters’ hounds or aristocratic pets, most mediaeval Italian dogs probably lived unrestrained, impoverished, vicious and scavenging lives.  So sinners suffering the punishment of being buried in burning sands, Dante compares to

dogs in summer
afflicted at the muzzle and the paws
by gnats and fleas, the gadfly’s bitterness. (trans. Stanley Plumly)

The nasty voraciousness of this dog-life Dante also uses when he describes some souls condemned to tear each other to pieces.  One of them, Ugolino, ceases speaking to the pilgrims and bites into the head of a sinful Archbishop: he “sank his teeth into that wretched skull/ And held on, as strong as a dog on a bone” (XXXIII, trans. Robert Hass). 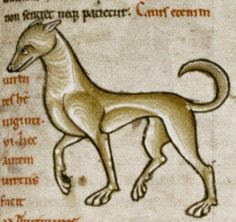 But as Holbrook points out, Dante in the end has little compassion for the suffering sinners, and none at all for the suffering of dogs.  He may have closely observed them, but did not feel for them.  Since animals had neither souls nor reason, they certainly did not enter Heaven.  I haven’t yet sought animals in the next two books of the Commedia, but I suspect that dogs will fade from sight through Purgatorio into Paradiso, except as opportunistic metaphors.

Artistically magnificent though the poem is, I confess I struggle with the more vicious dimensions of a world-view so condemnatory and ignorant of animal lives.
Posted by critical diaries at 15:02