No.29 - Our language/s: constraint and creativity

“I gotta use words when I talk to you”: so grumbles a character in (I think) a story by Raymond Chandler.  Whose words?  In what language?  With what level of understanding and intelligibility?  Embodying what hidden power dynamics?

In the welter of current debates about education, cultural diversity, and curricula, from primary school to university, these questions are inescapable.  Hardly a week goes by without the print media fielding an article about language.  To take just two recent headlines: “Othering SA languages stops here”, and “Language can be a powerful cohesive tool”.  The first article laments the destructive influence on ‘minor’ languages of world-dominant languages (pertinently, English); the other reminds us that language, in the broad sense, can bind us together, too.

We have recently commemorated the 40th anniversary of the Soweto uprisings, in which the imposition of Afrikaans on certain school subjects ignited deeper embers of dissent.  Also recently, schools in Thembisa demonstrated because Afrikaans as a teaching medium was being threatened.  The country’s African languages are almost all feeling beleaguered  to some degree.  Another newspaper columnist a few weeks ago lamented that she was losing touch with her original isiXhosa, because she used English more in her working life; she even described her isiXhosa as “corrosive”, which – if she meant what I think she does – is a terrible shame.

World-wide, unhappily, from the Amazon to Australia, dialects and complete languages, only ever spoken by tiny groups of people, are becoming extinct at almost the same rate as natural species.  Some feel this is tragic, others that it’s just the course of things, the ‘natural’ progression of a kind of Darwinian ‘survival of the fittest’.  Throughout history, ‘imperial’ languages have usurped or snuffed out others.  As Nicholas Ostler details in his wide-ranging book, Empires of the Word, these languages have included  Aramaic and Arabic, Greek and Russian, Bantu and Austronesian, Chinese and Egyptian.  Sometimes the process is imposed by conquest , at other times it’s more willingly accepted or assimilated.  Mostly there’s a complex mix of motives and cross-influences.  While the ‘Nguni’ languages such as isiZulu and isiXhosa can be said to have had an ‘imperialistic’ role in marginalising San/Bushman communities and their multiple dialects, the reverse influence of Bushman language on isiXhosa is obvious in the clicks and in certain vocabulary.  Nothing is static in language, yet we cling so tenaciously to notions of purity!

My university has been debating and re-formulating its language policy for years.  The bottom line is that (despite it being the first language of only some 10% of South Africa’s population) English is apparently unassailable as our lingua franca.  This is obviously firstly due to our imperial-colonial history, secondly to the global dominance of American media.  It has gone beyond mere forcible colonisation, though: when a Moroccan umpire oversees a tennis match between a Serb and a Spaniard in Beijing, he uses – English.  So while we might deplore the violent aspects of colonial-language dominance in certain places and phases in the past, and continue to deplore the decline of other indigenous tongues in the present, the current mantra of ‘decolonisation’ is likely to prove an unattainable chimaera.   Colonisation is not something like the common cold that we can just exorcise or get over, returning to some former state: it’s more like an amputation, something whose consequences we will have to live with forever.  We just have to get on with it, finding creative ways of responding to the current state, in whatever languages available to us.

I have travelled enough to understand the frustrations and feelings of disparagement suffered by the ‘second-language’ speaker – the Xhosa person obliged to use English in new contexts, for example.  (I don’t even have a competent second language – only a slew of more or less dodgy ‘third’ languages: Shona, French, bits of still others.   My most recent efforts to learn isiXhosa are bedevilled by uncontrollable spasms of French or German or Spanish which pop up instead.)  At the recent National Arts Festival, the conceptual artist  Lerato Shadi fielded a video of herself (?) wrapping her tongue round and round with red wool, then taking the whole bundle into her mouth – a vivid representation of the muffling, even choking experience of having to use another language.  She eventually works her tongue free and spits the bundle of wool out: ‘decolonisation’, I guess.  But I think we all know it’s never going to be so simple. 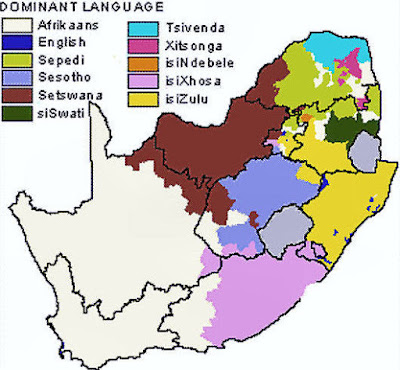 In our local Tower of Babel, I don’t know how to navigate all the splits and dilemmas.  I don’t want any language die out or be demeaned: I find all languages equally fascinating and valid and beautiful.  Time, resources and unstoppable global forces make it hard to implement equality, though.  At the same time, it’s unthinkable that we devolve into another form of conflictual apartheid – languages in silos.  We have to talk to each other.  Learning one or another local language can take us only part of the way, but it’s a start.  Translation studies should be a much more fundamental part of education curricula than they are.

Most of all, I think, learning another language – even if it’s one with a problematic colonial history – is best seen as an expansion of oneself, a fund of new opportunities.  It doesn’t automatically demean my home language to learn another.  Moreover, there is no longer a single ‘English’ anyway – and never was.  Even in England, Standard or Queen’s English is only spoken by a minority: the rest is a patchwork of dialects and accents, many of which even I have experienced as almost unintelligible. (I felt hardly more at home in Putney than in Patagonia!)  And English is so successful partly, perhaps, because it seems to be unusually flexible and able to assimilate local influences and varieties.

Hence writers globally have been able to reinvent ‘English’ continually to their own purposes.  The late Russell Hoban, for example, reinvented a rural English dialect for his post-apocalyptic novel Riddley Walker (still one of the very best of the genre).  It opens like this:

On my naming day when I come 12 I gone front spear and kilt a wyld boar he parbly ben the las wyld pig on the Bundel Downs any how there hadnt ben none for a long time befor him nor I aint looking to see none agen.  He dint make the groun shake nor nothing like that when he come onto my spear he wernt all that big plus he lookit poorly.  He done the reqwyrt he ternt and stood and clattert his teef and made his rush and there were wer then.  Him on 1 end of the spear kicking his life out and me on the other end watching him dy.  I said, ‘Your tern now my tern later.’

Once you tune your ear into this, it becomes quite bewitching.  Never mind what Scots writers and poets, from Robbie Burns to Hugh McDairmid and Kathleen Jamie, have achieved in Scots English.

And writers across the globe, from the Caribbean to Kenya, have set about reinventing the language of their oppressors for their own ends.  Nigerian writers have been especially inventive, it seems.   This is the opening of Gabriel Okara’s little novel, The Voice, a kind of metaphysical search story which deliberately uses indigenous Igbo grammatical and idiomatic constructions to lift English into a distinctly new register:

Some of the townsmen said Okolo’s eyes were not right, his head was not correct.  This they said was the result of his knowing too much book, walking too much in the bush, and others said it was due to his staying too long alone by the river.
So the town of Amatu talked and whispered; so the world talked and whispered.  Okolo had no chest, they said.  His chest was not strong and he had no shadow.  Everything in this world that spoiled a man’s name they said of him, all because he dared to search for it.  He was in search of it with all his inside and with all his shadow.

Even more inventive is Ken Saro-Wiwa’s Sozaboy, related through the naive viewpoint of a youngster caught up in civil war.  It draws on Nigerian Creole (or Krio) – creoles are themselves astonishing inventions – as well as on highly individual quirks and neologisms.  No one on earth speaks exactly this language, yet we as we read we get to comprehend it entirely.  Again, the opening:

Although, everybody in Dukana was happy at first.
All the nine villages were dancing and we were eating plenty maize with pear and knacking tory under the moon.  Because the work on the farms have finished and the yams were growing well well.  And because the old, bad government have dead, and the new government of soza and police have come.
Everybody was saying that everything will be good in Dukana because of new government.  They were saying that kotuma ashbottom from Bori cannot take bribe from people in Dukana again.  They were saying too that all those policemen who used to chop big big bribe from people who get case will not chop again.

At perhaps no time in our history has such creativity been more necessary.  And with all our global media resources, never have opportunities for fruitful interchange been more available.  Precisely because the clashes of established identities and historical grievances bedevil our desires for peace, we have to have faith in the endless human gift for inventiveness.  Such acts of the imagination are acts of respect, empathy, possibility and connection.