No.30 - Hope rekindled?: A Zimbabwe episode 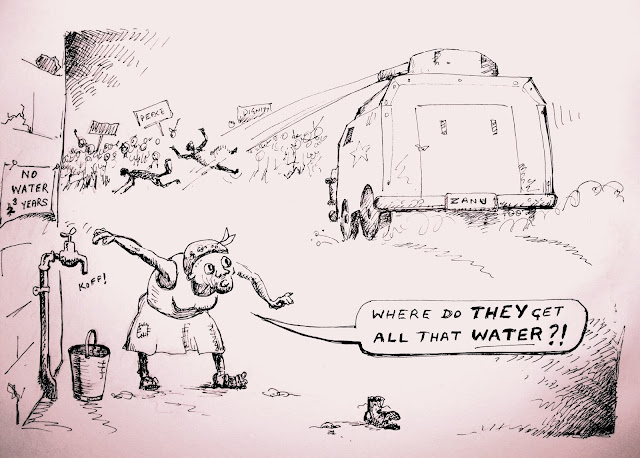 The pale cream of my university’s clocktower glows in surreal smoothness in a slightly chilly evening sky.  The hands of the clock have been stuck for months now at twenty-to-four. Around the moon-globe lights a pair of drongos hawk for insects, oblivious to the highly charged human event happening below them.  I have driven into town to attend, the richest sunset of violent scarlet I have ever seen here backing the slowly-turning blades of the ridge-top wind-turbines.  In a moment of uncharacteristic superstition, I hoped it did not presage blood.

It did not – or not directly.  The event is one of many gatherings around the world of the so-called #ThisFlag movement in Zimbabwe.  We are all here to express support for a peaceable transition to a caring and responsible government in the country of our birth or domicile or affection.  Candles have been lit, endowing our globule of darkness with a certain sanctity.  Indeed, the whole thing takes on a Christian air – not, the organisers hasten to assert, to the exclusion of any other beliefs – with opening and closing prayers to the Almighty to bless the congregation.

The Zimbabwe national anthem is sung – very tentatively, it seems – and it’s a recent, ZANU-PF-created one, not the “Ishe Kumborere Afrika” I used to sing with our school-kids in the halcyon days of the early ‘80s.  It evokes ‘Chimurenga’, its ideals now in tatters; only a line about the probity of ‘our leaders’ is emphasised with ironic force and answered with cheers.

The lanky organiser – a co-ordinator, not a leader, he insists; this is a leaderless movement – and his supporters are draped in Zimbabwe flags.  (There is also, oddly, a Ghanaian flag waving above the moderate crowd, and even an ANC banner.)  With charming self-deprecation he recalls the role of pastor Evan Mawarire, who seems largely to have coalesced the #ThisFlag movement in its spin-off of trader- and taxi-operator shutdowns in Beit Bridge, Bulawayo and Harare.  And he reads the movement’s six fundamental principles – dignity, accountability, democracy, non-violence... – like Mosaic pronouncements from on high.  They are compact, they seem unarguable – like a distillation of core liberalism, ubuntu, the Freedom Charter and satyagraha – so unarguable that it seems momentarily mystifying that any government should respond with brutal oppression and random terrorisation of the general populace.

But of course, they – gangster governments everywhere – do exactly that, over and over again.

The intermittently blaring bullhorn changes hands.  An exegesis of the colours of the Zimbabwe flag is undertaken, interpretations to suit the new tenor of peaceful resistance to abuse and destitution.  Says one student, she had lost all pride in this flag, it had become so associated with state terror and corruption, but here we are, renewing its national validity and charge and pride.  The association of the red star with international Communism is quietly omitted, as is the question of how and whether ‘Zimbabwe’ should ever have become a ‘nation’ in the first place.  Too intellectual for this occasion: this is about solidarity and grief and tentative hope.

And tears.  After the more formal brief speeches by three or four organisers, the floor – or step – is opened to spontaneous contributions.  One after another student comes up, almost all climbing out of depths of shyness or hesitancy, in a variety of skin-tones and clothing and accents.  They are intensely moving.  One young woman can scarcely deliver her story  for weeping – a story of how her mother, herself and a 3-year-old broke down near a Zimbabwe military barracks and were unnecessarily terrorised by soldiers.  Another burly young man visibly overcomes his fear, both of the occasion and the general situation, and asserts the mantra ‘Enough is enough’.  He mentions a recent discovery of 60 bodies beneath a soccer field, legacy of the Gukurahundi massacres of Ndebele in the 1980s.  Another laments how his family was destroyed by the hyperinflation of 2008.  So many wounds.  A white lad unselfconsciously describes himself as African, says how pessimistic he was just a week ago, driving back to university from Zimbabwe – but now he sees hope again.  Again and again, the speakers assert their peacefulness as well as their impatience, tired of the corruption, the hypocrisy, the failures.  ‘We were always told,’ says one, ‘that education was the key; now I have the key, but when I go back home, they have stolen the door!’

And there is a final sobering and necessary warning, also delivered in a sudden flood of irrepressible tears, for everyone to be careful, not to tag photographs or say anything unwise on social media.  ZANU-PF agents are everywhere, poised to harass and even kill.

It’s only too true.  More than a decade ago now I attended another such gathering in the lee of the cathedral in solidarity with the disappeared, the displaced, the exiled, and hurt and starved of Zimbabwe.  For a while we fasted in suitably-labelled black T-shirts in a frail gesture of solidarity with the destitute.  I was asked to speak then, and did.  I began by saying the purpose was not about party politics, or regime change, and certainly not about violence.  A week or so later I was ‘reported’ in the Zimbabwe Herald newspaper as being an ex-Selous Scout (wrong) bent on fomenting violent revolution in order to resurrect British colonialism (wrong again).   I wrote a letter back, couched in heavy irony, pointing out that this was precisely the opposite of what I’d said.  Surprisingly, they published it.  Still, in subsequent years I have been twice detained by Zimbabwe officialdom for nothing more than being in possession of a camera.  Though ultimately harmless, the arrests were salutary reminders of the vulnerability and helplessness that so many experience at the hands of authoritarian governments everywhere.

And as this small but robust and beautifully polite gathering closes with a minute of silence in honour of the disappeared, the maimed, the exiled, that is a final impression: something warm, fragile, and indescribably precious.

The drongos – nhengure, in Shona, an epithet once given to hypocritical whites, after their forked tails – go on flitting about like bats, feeding.