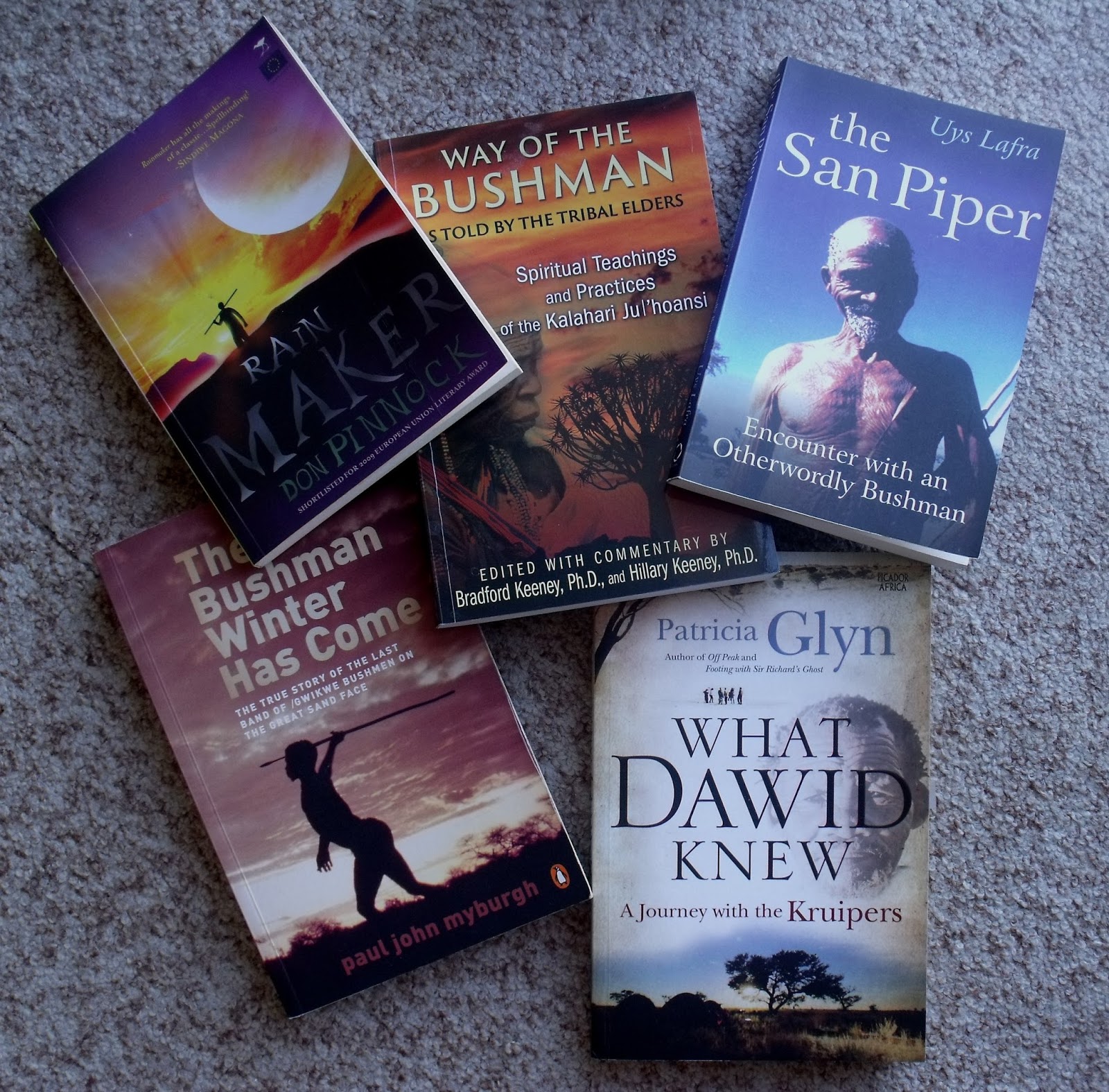 I’ve been trying to put together an article on the latest surge of literature invoking the “Bushman” as the potential saviour of our messed-up world.  Goodness knows we need a philosophy and lifestyle that generates less toxic waste, curbs rampant population growth and consequent habitat destruction, urban alienation, and insoluble warfare.  Whether the so-called “Bushmen”, or what’s left of such hunter-gatherer communities, can really help us in our modern malaise – that’s a moot question.

James Workman, one of the world’s top water experts, argues in his book Heart of Dryness that, since shortages of water will be a defining feature of the global future, Bushmen’s frugal ways of surviving desert conditions may prove to be vital skills.  White writers, perhaps seeking to compensate for the genocide of the Khoi-San peoples in the eighteenth and nineteenth centuries, are resurrecting old folktales and testimonies into modern forms.  Don Pinnock, in his young-adult novel Rainmaker, figures Bushman shamans – one named Mr Khabbo – as the rescuers and mentors of a young lad from the ‘Coloured’ ganglands of the Cape Flats.  In The Way of the Bushman Bradford Keeney, himself initiated into Ju/hoansi (Kalahari Bushman) shaman-hood, relays the insights of “the elders”, who claim both that the anthropologists have got it mostly wrong, and that their own wisdom is essential to “saving the world”.  Most recently, journalist Sylvia Vollenhoven has published her intriguing memoir The Keeper of the Kumm.  As a ‘Coloured’, Vollenhoven can claim a certain direct ancestry in /Xam Bushmen, and finds, through both shamanistic ritual and reading /Xam kukummi (stories), a route to health that Western allopathic medicine couldn’t.

Behind all these, and other books and efforts to refurbish the Bushman, hovers the inevitable figure of Laurens van der Post.  More than any other writer, van der Post was responsible for launching the image of the Bushman as essentially peaceful, leisurely, ascetic, deeply spiritual and intuitive, and in touch with nature – completely reversing the image of previous centuries of Bushmen as a primitive and verminous nuisance.  On the strength of a mere few weeks in the Kalahari in the 1950s, he wrote The Lost World of the Kalahari and then The Heart of the Hunter, made a film for the BBC, and delivered dozens of lectures around the world.  The “Bushman within” – a way of thinking and being he claimed had been largely lost by the industrialised West – became a central facet of his public persona.  Quite likely he came to believe a lot of it himself. 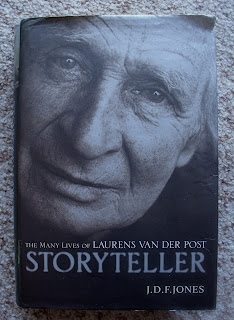 Van der Post has come in for a lot of schtick of late.  J D F Jones’ 2001 biography, Storyteller, has been particularly damaging.  Jones argues, with a mixture of regretfulness and exasperation, that just about everything van der Post ever told anyone about his life was retrospectively doctored, exaggerated, misremembered or downright invented.  Almost twenty years before that, anthropologist Ed Wilmsen was pointing out inconsistencies in van der Post’s various accounts of his encounters with Bushmen, and questioning the accuracy and originality of his Bushman information.  Certainly, most of the folktale material included in The Heart of the Hunter was derived from the work of Wilhelm and Dorothea Bleek of Bleek-Lloyd Archive fame, with only tangential acknowledgement from van der Post.  Many of those stories came from the informant //Kabbo (see my previous post on him).

Okay, so van der Post confabulated a philosophy for himself, one that he considered useful in a disturbed and disturbing world.  Perhaps we can stop worrying about whether he made stuff up, or about how historically or anthropologically “wrong” he got the Bushmen.  Aren’t all philosophies confabulations – composites of story, poetry, abstractions, assertions, rituals – farragoes of the imagination?  It’s striking how the critiques of van der Post I’ve read are uniformly focussed on historical accuracy and on questions of racial identity – South Africans’ Number One Obsession.  Very little has so far been said about either van der Post’s literary style and quality, or about the ecological dimension to his philosophy.  The latter is especially surprising, seeing as the “Bushman philosophy” that everybody examines or espouses is so intricately tied into their physical and animal environment.

So what was Laurens van der Post’s ecological vision, of which the Bushman mythology was a part, but not the whole?

He expressed it compactly in the series of interviews published as A Walk with a White Bushman:

Every bit of unspoilt nature which is left, every bit of park, every bit of earth still spare, should be declared a wilderness area as a blueprint of what life was originally intended to be, to remind us.  When we do see that, it is like having a religious experience, we are changed by it.  This act of instinctive re-remembrance sparks off a most dynamic sense of guilt and horror at what we are doing, and an immense longing not just to conserve but to rehabilitate the earth. ... Finally, nature will always take care of itself even without man.  But man without nature is unthinkable and, known or unknown, his spirit needs it ...

Broadly speaking, these sorts of ideas are widely held by many people.  Bushmen, in van der Post’s construction, exemplified an intuitive belonging within nature which made daily living a “religious experience”.  He is regularly accused of romanticising the Bushmen, and perhaps he did, but he was also fully aware that we can’t all just “go back” to such a lifestyle:

[T]he Bushman finds himself in the power of a very highly conscious, highly organised civilisation which finds everything he represents totally unimportant, totally discredited.  So the problem is, what does one do about this?  Well, I thought that the only way that I personally, as a human being, could tackle it would be to translate this Stone Age idiom into a contemporary one and to try to show that it is important to us...

Translating age-old Bushman idiom, “totally incomprehensible to us now”, into a contemporary one is what most writers, from the Bleeks to Pinnock to Sylvia Vollenhoven, have also been trying to do.  Van der Post did what they all do, what the original //Kabbo professed himself happy with – seeing the original kukummi and testimonies transmute into print and drift away to different communities.  That is precisely what stories are supposed to do: they belong to no one and every one.  Stories “float on the wind” – a //Kabbo phrase, taken out of context but now the popular mantra. 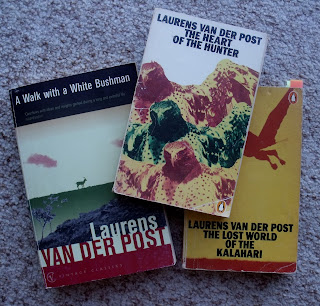 Van der Post thus tried to propound this philosophy from yet another different angle, in two sequential novels, A Story Like the Wind and A Far-Off Place (1974).  The main character is 14-year-old Francois, whose family is slaughtered by “terrorists” somewhere in Southern Rhodesia.  He happens to have rescued a stray Bushman – named, inevitably, Xhabbo – who now is able to lead Francois, his girlfriend Nonnie, and his own wife on a months’-long journey, a thousand miles across the deserts to the West Coast.  Xhabbo teaches Francois, and so the reader, all sorts of bush-lore in a manner repeated in numerous such works, both fictional and non-fictional.

A Far-Off Place is frankly pretty dreadful, the action sequences clumsy, the whole narrative implausible, the dialogue inauthentic.  Matthew Fike’s welcome article on these novels unpacks complex Jungian references, but says little about ecology. In the course of Place’s laboured unfolding, however, van der Post’s ecological philosophy sparks through, not only in Xhabbo’s knowledge (tracking, communing bodily with animals, finding tsamma melons and other water sources, the inevitable honey-guide, etc etc) but also in epiphanic moments of communion with nature, supported by considerable detailed knowledge.  At these moments, van der Post’s often pompous and ponderous prose can modulate into the richly lyrical.  There is this passage, for example, on honey and the bee – prescient, in fact, given current reports of catastrophic collapses in bee populations around the world today:

[Honey] was a substance of a mystical kind, which in the eating was transubstantiated in the blood of the eater to become a thing of spirit, making him a different person.  As one ate, so one became, and for him it was therefore, however instinctive and unconscious the deed, an act of as great meaning as the sacrament in which bread and wine were believed to be transubstantiated into living flesh and blood. ... It is the bee that produces the honey and whose ways Solomon in all his glory exhorted the men of his day to study in order to be wise.  It is itself involved in a partnership with flowers, plants and matter, so that it plays a great intermediary role in bringing together in a single creative purpose, four dimensions that would otherwise be separate...

The organic, interconnected vision described here is echoed many times in the novel.  For Francois, the dawn call of a intimately-described dove – “small, neat, precise in figure, and immaculate in a dress of mauve and purple with a buff cravat held in a jade-black ring to a delicate throat” – evokes a holistic view that owes something not only to Bushmen but also to Jung, Jan Smuts and Christianity: 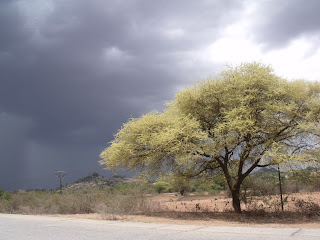 [A]bove all the view was unpolluted, not just free of the unnatural smog human beings inflict on the earth that they inhabit, but in the more subtle and profound sense that it had never even suffered the intrusion of sophisticated minds and civilised eyes, acute and slanted with calculation of how to exploit it for their own ends. ... creation for creation’s sake.

One can have all sorts of problems with Laurens van der Post’s portentous vocabulary of mysticism which, like many of the books I mentioned earlier, can drift off in the direction of New Age-type vacuousness.  One can gripe at his historical inaccuracies, his self-promotion, even a lingering paternalism, but I’m far from convinced that there isn’t something of important ecological value to be rescued from van der Post’s untiring imagination.

Posted by critical diaries at 21:53