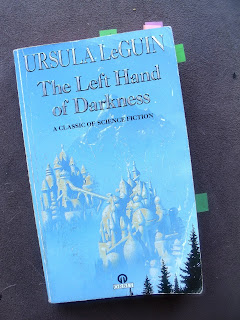 Here we are, on yet another “march”.  This one is supposedly a national gesture by academics to the South African government to do something more positive about the university fees crisis.  We are so bad at this.  We are less robust or organised than French farmers.  We don’t aspire to the spine-tingling song-and-dance choreography of COSATU workers.  And we’re far less scary than the actually quite small bunch of campus protesters who manage by manipulative violence, childish vandalism, and disgusting online bullying, to bring the legitimate work of thousands almost to a halt.  Tripping along behind it all is a potentially very positive re-examination of what we fundamentally do – this thing called “teaching”.

I estimate that less than a third of all the university’s staff are present at this demonstration.  Some wear their archaic remnants of mediaeval “academic dress” and wave placards with sundry uncoordinated messages: Mathematics For All; 1.5% Its Not Much (no apostrophe).  Some of us make ours up on the trot with koki pen on coloured card.  What shall I say: Zuma: Show Leadership For Once in Your Miserable Life, or Take a Breath: Think This Through?  Should it be Yes We Can! or In Your Dreams, Chinas?

Eventually I scribble Curiosity. Adventure. Delight.  It’s a quotation from Ursula le Guin’s otherworldly novel The Left Hand of Darkness, which I happen to be presenting to our first-years at the moment.  The words are part of the protagonist Genly Ai’s explanation of the values of the Ekumen, the interplanetary trade organisation of which he is a solitary envoy.  The Ekumen (cf. ecumenical) is a kind of hybrid of the UN and the Internet.  It espouses, alongside voluntary trade alliances between diverse peoples scattered across space,

Increase of knowledge. The augmentation of the complexity and intensity of the field of intelligent life.  The enrichment of harmony and the greater glory of God.  Curiosity. Adventure. Delight.

There can hardly be a better definition of what I think “teaching” is about, or rather education (Latin e + ducere: to lead out and away).  In amongst the entangled drives, the obscure agendas, and the inflated rhetoric of the demonstrations, there is frequent recurrence of the phrase “quality education”, but little discussion that I can see of what precisely “quality” might mean.  Mostly it seems something of an afterthought to “free”.  One can be sure that curiosity, adventure and delight are unlikely to be uppermost in anyone’s mind.  As Genly Ai ruefully notes, this is “not the tongue spoken by those who rule men, the kings, conquerors, dictators, generals” – or even, it might be added, democratic bureaucracies.  I can’t quite see what’s driving the idiocy of violent campus protests, but I’m pretty certain it’s ultimately about power.  And power always deploys simplification and exclusionary consolidation, not the enhancement of complexity and harmony.

The rhetoric of the disarrayed tentacles of the FeesMustFall-type campaigners – at least some of whose desires I and my colleagues in principle support – often intersects with broader calls for “transformation” and “decolonisation”.  Several seminars, a couple of conferences, and various books later, I still have no idea what “transformation” might actually mean or entail, let alone how “it” might be implemented; asking the question usually provokes an outburst of backward-looking invective directed at the legacy of apartheid.  The overcoming of that quite specific historical crime gets conflated with a much looser call for “decolonisation”.  This seems to me about as attainable as a reversible orgasm, or equivalent to trying to fit a rotted leg back onto an amputee a decade after the injury.

If one cannot waltz backwards through history, towards a utopia that never existed, one can only try to invent new legs for the old stump, and limp or segue onwards.  That process requires innovation, a willingness to explore diverse possibilities; it requires breaking new grounds, whatever traditions might be summonsed in support; and it requires the optimistic mind-set of loving what one is building, rather than the destructive myopia of the merely angry.  Curiosity, adventure, delight.

As it happens I am also exploring, with another class, Dante’s fourteenth-century epic of pilgrimage and redemption, the Divine Comedy.  And I’ve serendipitously discovered Alberto Manguel’s new book, Curiosity (2015).  Manguel is one of those polymathic European scholars who can convey massive learning with lucid panache and wholly refreshing approaches; I loved his earlier book A History of Reading.   In Curiosity he uses Dante’s great poem as a central thread on which to hang a series of meditations on the nature of curiosity itself – essentially, why we ask the kinds of questions about life that we do.  Manguel is so widely-read that in a page or two he can elucidate the ideas of three European philosophers you’ve never even heard of; but his definition of curiosity is straightforward enough.  The path of questioning can be a thorny one:

The great quest which begins in the middle of our life [like Dante’s poetic pilgrimage] and ends with the vision of a truth that cannot be put into words is fraught with endless distractions, side paths, recollections, intellectual and material obstacles, and dangerous errors, as well as with errors that, for all their appearance of falsity, are true. Concentration or distraction, asking in order to know why or in order to know how, questioning within the limits of what a society considers permissible or seeking answers outside those limits: these dichotomies, always latent in the phenomenon of curiosity, simultaneously hamper and drive forward every one of our quests.  What persists, however, even when we surrender to insurmountable obstacles, and even when we fail in spite of enduring courage and best intentions, is the impulse to seek, as Dante tells us...

Education, for me, is nothing other than providing for the student the matrix within which this negotiation can flourish.  Students always falter, to differing degrees, and so do we; and so we ideally try to provide the grounds on which to pick ourselves up again, and start questioning afresh.  Some crises can be good for this process, even when, as now, the nature of the matrix itself comes under scrutiny.  But as the present upheaval shows, individual responses can be highly idiosyncratic – and, contra the normative intolerances of varieties of group-speak, they ought to be.  Dealing with, stimulating, enhancing, and above all tolerating such idiosyncrasies and complexities in the teaching-learning situation is a process unsuited to the recent drive towards tertiary education’s so-called “massification” – another term of ideologically-impelled, self-disabling and self-contradictory vacuity.

George Steiner is another multilingual European scholar of awe-inspiring breadth and breathtaking richness of expression (not to be confused with Rudolph Steiner, the anthroposophist educator).  Steiner (George) has argued throughout his wonderful book, Lessons of the Masters (2003), that it is not the levelling of opportunity for all that makes for effective education, but the particularities of a master-disciple relationship.  No matter what "transformations" or "decolonisations" or curricula reforms occur, this remains the core.  My own master-mentor, the late Don Maclennan, introduced me to Steiner maybe thirty years ago, in the form of Steiner’s huge and enthralling book on translation, After Babel.  I have since read much of him, another kind of master-teacher.  I am always captivated if frequently left behind, though it would be hard to specify just what all Steiner’s effects on me are or will be.

In any case, Steiner shows, those effects are intrinsically fraught and unpredictable, and ought to be.  The exchange between mentor and acolyte ideally passes through stages of adoration and mimicry, followed by challenge, and ultimately supersession.  The ideal master produces not a clone, but a skilled escapee, even a betrayer.  At times, it is hard to say which is the master and which the pupil.  “The pulse of teaching is persuasion,” Steiner writes.  “The teacher solicits attention, agreement and, optimally, collaborative dissent.”  Crucially, it is not in the muffling anonymity of the lecture theatre, nor in the boiled-down study-notes posted on the internet chat-rooms, but in the eyeball-to-eyeball interchange, the oral Socratic dialogue, where the most fruitful, quality education occurs. 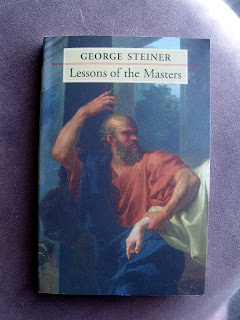 One might say that whoever grasps Socrates’ [pedagogical] intention is made an autodidact, especially in ethics.  For Socrates himself professes ignorance; the wisdom attributed to him ... consists only in his clear perception of his own unknowing.

This wavering, unmeasurable, fabulous energy – in which I exhilarate daily, often at the hands of students clearly cleverer than me – largely escapes the purview of the “decolonisation” activists; it baffles modern managers; and it frightens governments.  It is why the Athenians forced Socrates to swallow hemlock, why Stalin murdered the finest poets, even why the God-bound Dante condemns Odysseus to the Inferno – because he dared explore too far, and only for himself and its own sake.  But where would we be without curiosity about the darkness?

In The Left Hand of Darkness, a mystical character named Faxe the Weaver is key: I take him to be closest to Ursula le Guin’s own voice. Echoing Socrates, he says:

Worth recalling, as we mill about and wave our imploring or angry placards for the photo-ops, looking for silver linings in the chaos.