No.59 - The novels of Claire Robertson

South Africa is producing a slew of impressive new novelists. Among them, Claire Robertson is easing into special prominence. She has published three substantial novels –  The Spiral House (winner of the Sunday Times Fiction Prize), The Magistrate of Gower, and now Under Glass – all handsomely produced in hardcover by Umuzi. Robertson is mining a rich and distinctive vein of historical evocation; although each novel is set in a different time and milieu, they feel of a piece. There are certain similarities of voice between them, some overlaps in their circling around issues of women’s domesticity, repressed sexualities, conditions of entrapment of “sorry green colonialists” (Glass 84) in the almost forgotten cracks in greater societal forces. They are period-pieces of exquisite precision, in which world events – mostly the evolution of empire in the nineteenth and early twentieth centuries – revolve in a shadowy dance behind the primary scenes of a slave house, a kitchen, an isolated magistracy, a sugar plantation.

The Spiral House is set in two periods, narrated in interlocking chapters. The first is the 1790s in the Cape Colony, focused on the experiences of a Dutch-Malay woman, Katreijn van de Caab, caught in strange twilight zone, technically free but obliged still to live much as a slave, yet better-educated than many of her farm-owner ‘masters’. (There were apparently a goodly number of such, Muslim-educated women in the Cape.)  This novel follows a recent strong trend to focus on slave society, including the historical researches of Rob Shell and Nigel Penn, and the ‘Petronella’ novels of Andre Brink and Dalene Matthee.  In the dense intimaco of her own research, Robertson’s portrayal of a fictional but similar character reminds one of Dan Sleigh’s wonderful novel Islands.

The second strand of The Spiral House is set a century and a half later, centred on a mission station in the Limpopo borderlands and refracted through one somewhat rebellious Sister Vergilius. Despite some commonalities of theme, this structure feels a touch contrived: two novels, almost, struggling to escape a single cover. For Katreijn, Roberston invented a new voice, by which a non-English speaker’s sensibility is conveyed in a unique, exotic yet natural English argot: a triumph.  By comparison the other strand feels a little flat. Nevertheless, the novel is  a worthy prize-winner.

The Magistrate of Gower, with its Hardy-like title, is more satisfactorily singular in its chronological line (roughly 1900-1939), even as the omniscient narration ranges across characters.  The main character is a ‘Boer’, in the late nineteenth-century sense, Henry Vos, who finds himself, unusually, in a British prison camp in Ceylon for Boer-War POWs.  He returns to negotiate the ambivalences of post-Union South Africa, launching a law career in Cape Town, before being offered the remote magistracy of Gower, a small Karoo-type dorp somewhere near Jamestown.  There, inhabitants are barely aware of either bigger cities or the surrounding countryside, let alone national or world events, and nothing more dramatic than an arson case transpires.  Yet plenty of interest and tension unfolds at intimate and subtle levels. Henry Vos’s tortured and covert sexuality is just one of many dynamics. One of Robertson’s strengths is conveying these individual struggles through details of objects and gestures, often beautifully intertwined with emotions and thoughts.  Here’s a representative passage:

Mrs Theron keeps both arms pulled in close to her body, with her handbag in between her and the woman’s accusations. “Mrs Sara Theron! And what do we have here?” The woman has her eyes on them but her head is tilted slightly away as she speaks, as though she is commenting on them to another, invisible, party. She is utterly different from Mrs Theron: how firm and upright and solid is her body against the gentler form of the younger woman, how definite are her colours; Mrs Theron and the other Gower women Adaira has seen this morning wear veld and forest colours – fawn, most of all, fawn with a print of pale small flowers or dim inorganic shapes, and shoes of brown leather, neat buttons. (Magistrate 130)

Every such detail is marshalled to define a character or offer insight into the whole society – a technique, akin to Jane Austen’s, which appears small-scale and trivial, but is never dull and always deftly, economically and often ironically delivered. 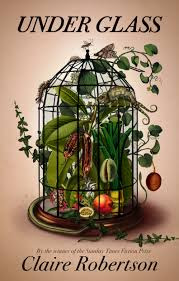 Under Glass, Robertson’s most recent and accomplished work, exposes another such unexplored space, yet one as common and crucial to white settlement: the sugar cane estate in peri-coastal Zululand in the mid-1800s. This is also a two-strand novel, but cannily integrated. The main strand is omniscient but centred on the character of Mrs Chetwyn, wife to an emergent sugar-cane farmer, mother of five. The second, alternating voice belongs to the youngest of the five, “Cosmo”, whose true position in the family emerges only in the last quarter or so. Only a second reading reveals just how cunningly the clues are laid – and omitted. In the opening pages, we learn only that certain household members are “loyal to [a] conspiracy”. And I won’t spoil it for you by revealing its precise nature here.

Again, I’m impressed by how a density of research is deftly integrated into the portrayal of everyday textures and the revelation of character – what Robertson might well call a “housewifely” use of “lore, vigilance and care with thoroughness, thrift and duty” (Glass 72). Each novel is a thoroughly persuasive period-piece without ever feeling didactic. Much is filtered through the primary purview of the domestic, even ruminations on wider dynamics of empire, agriculture or science. (Nascent sciences – the new Darwinism, paleontology and human origins, botany and entomology – keep surfacing as a minor theme, reminding me of Ingrid Winterbach’s novels – there’s a whole topic for a thesis in this subtle presence of science in our fiction. Indeed, at times there is a cool forensic distance in Robertson’s narration which echoes that of her scientist-characters.)  Rather than being told by the omniscient narrator what to think of the characters and situations, what is not said is equally important: almost every sentence is resonant with implication. The richness lies somewhere between the intellectuality of George Eliot and the metaphoric lyricism of Australia’s Patrick White.

In all three novels, Robertson has developed a mode of present-tense narration which is influenced by the cadences and vocabularies of the depicted period, but which still feels unique – both authentic and invented, as it were –  a sort of ‘neo-archaism’.  In the case of Cosmo, the sensibility of a child, despite being considered from a point of adult sophistication, is almost magically conveyed in the present tense.  If there is a tiny criticism to be made here, it is that the passages of interiority briefly accorded to the Zulu manservant/guide Fuze, or to the indentured Indian maid Griffin, are not strongly enough differentiated from Mrs Chetwyn or, for that matter, Magistrate Vos. A danger, perhaps, of  falling victim to one’s own success.

Though our fashionable shibboleths of race, patriarchy, class and gender are present throughout, they are filtered through the everyday complexities of real relationships, a strategy refreshingly free of cant, gross binarism and sentimentality. Building character pixel by pixel, as it were, Robertson places a lot of faith in her reader to sense the implications. Consequently, there is scarcely a dull sentence in the entire novel, scarcely a paragraph not worth re-reading for its balance, resonance, and lyricism. A representative passage:

“The land is uneasy. Almost uncanny,” he [Chetwyn] says. He makes a picture of suspicious homesteads and women alone and marks of newness and strange patterns in the way cattle are herded and rivers forded. He speaks of a sense of tremors, the quivers that will sweep across the flanks of a horse hours after it has been in a carriage wreck – tremors under the surface, startlement never far, nerves rinsed and taut. But oh, the look of it. “It has a way with hills,” he says, and strokes the air as if stroking an animal’s flank, and speaks of hills that follow one another in successive swells to the north, or cut off to the east, all sharing the same blunt, sudden end ... (Glass 55).

Beautifully done: the sentences unfold rhythmically, and a compact indirectness is preferred over loose dialogue; the metaphors evoke the self-same lifeways, and there is the satisfying assonance of “blunt, sudden”. These are hallmarks of a novelist who is, in my experience, writing as well as anyone in the country today.

Posted by critical diaries at 00:30