No.17 - "The Effort": Recovering Daddy Bernard

Are the minutiae of one’s family really of interest to anyone else?  I’m often asked about it, so maybe.  Anyway, for some reason, my own little search for my maternal grandfather has been swirling unstoppably around in my head, so here goes.

The salient fact about “Daddy Bernard”, as we called him to distinguish him from my step-grandfather, is that he died before my mother was born.  So neither she nor I ever knew him.  What we have left of him resembles an aircraft crash – literally, as I have the joystick of his Sopwith Snipe, a well-worn airspeed-indicator, and a brass model of a Snipe which he must have had made at some point.

Among the photographs he left us, mostly from his Royal Flying Corps days, are several of crashed biplane fighters.  Such crashes were known as “efforts”.

This is a life as an “effort.” 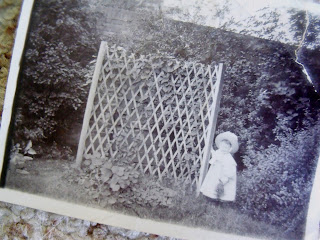 Bernard Hobson Matthews was born in Cardiff, Wales, on 20 August 1899.  Brief newspaper obituaries indicate his family moved to Ealing, London, when he was a child, and he was educated there. At the age of 18 , in 1917, he signed up with the RFC.  We have a photograph of him, aged four, dressed in a frumpy frock; another at seven or so, with a range of family members around him, only a few who are identifiable; his parents, his sister and brother.  Otherwise, his youth is like empty sky. 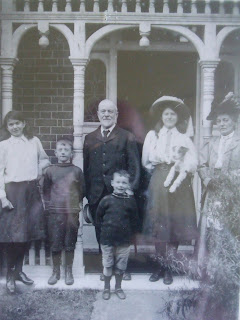 After he left the RFC in 1919, he sailed around the world a bit, and took up a job as farm manager on a farm near Kitale, on the border of Kenya with Uganda.  In Nairobi he met my grandmother, Mary Pitt, married her, and in 1927 gave her my aunt, Anne.  A year later, he impregnated Mary again.  Three months later, he was dead of blackwater fever.  He was 29.  These bare facts aside, most of that period is also a blank, apart from a batch of love-letters to Mary, kept all these years by Mary and then my mother in a lovely rosewood writing-box.  They are not informative of much apart from a certain self-torturing religiosity.

The only period for which we have any texture are his flying days.  They were, clearly, the most exciting of his life.

We have: A Character Certificate, no.86198, issued on 7 November 1917, gives his date of enlistment as 4 July 1917; his employment previous as Clerk; his height as 5’6”.  At that point, he was appointed to a temporary commission as 2nd Lieutenant.

We have: a “Royal Air Force Training Transfer Card”, a slender blue-grey covered booklet, which tracks his movements between December 1917 and June 1918.   The first page lists a period of training under one Capt P W S Bulman, first on dual-control Caudrons (7:59 hours) and Avro (15:21 hours); then solo on each aircraft (2:10 and 17 hours respectively); then the newest fighters, the Sopwith Pup (6:35 hours) and Camel (0:40 hrs).  The skills included sustained turns, figures of eight, sideslip, stalling, spin half-roll and loop, and forced landings in bad weather.

His first, 15-minute solo was performed on 29 January 1918, and is adorned, under the column for ‘Remarks’, by the cryptic word: “Crash”.

Bernard graduated on 13 July 1918, with a total of 49:45 hours of flying.  He then did a further 16:30 hours in the Camel, including aerial fighting (he had to take close-up photos of his ‘quarry’) and firing drills.  “A steady pilot”, Bulman concludes.

Then he went to war. 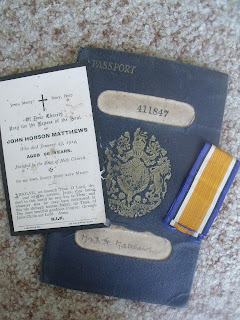 We have: his floppy, battered log book, which lists all his flights, with an occasional quirky comment.  At 6.45 pm on 10 August 1918, he made his first flight in France.  On the 19th he flew formation from Doullens to Arras; on the 21st, he flew Doullens-Amiens-Etaples, and crashed on landing.  ‘Exit “Pixie”’ is the remark, this being presumably Camel D6426 which he had been flying regularly.  Crashes were the main hazard, it seems.  On the last day of August he was flying around Arras, and notes “Exit Beelzebub”  – presumably Camel F2135 – “Shot to Hell, R.I.P.”.  I don’t know if this means he saw action at this point, or there was mechanical failure.  On 16 September he was on “Balloon Line Patrol”: “Bus written off by Archie”.  On 17 October he flew from Avesnes-le-Comte on a few days’ “Offensive Patrol”, including one in “Hell of a fog”  He continued flying OP’s, dropping bombs, until the last possible day, 10 November 1918, including  a “straffe” of an aerodrome and a railway – “Last show of War”.

According to one obituary, he once came down behind enemy lines and effected his escape; but there is no indication of this in his logs – it seems unlikely.

He was insulated, in short, from the horrors of the trenches.  He did not lose a boyish sense of humour; he was still a boy.  He captured the whole experience in a piece of doggerel, one of several such lightly competent literary squibs we have – “A Flight of Fancy”:

------- All the R.A.F.’s a farce,
And all the pilots in it, silly asses.
They have mechanics, and an aeroplane,
And one man in his time flies many types,
In something like this order – First the Caudron,
Steady, and slow, and certain, then the Avro,
With 100 Mono, of an 80 Gnome,
Creeping like snail at 80 miles an hours.
Then comes the Priceless Pup – swift, light, ideal –
Zooming the tress, and holding up the traffic,
Before the pilot’s posted overseas.
And then the ever-dreaded Sopwith Camel,
Full of strange tricks, and spinning like the Deuce –
accounting for more military funerals,
Than all the other buses put together.
Then comes the Snipe, more powerful than any;
Too late, alas!, to do more glorious work
Than put the wind up civvies on the Rhine.
.......
Last type of all that need herein be mentioned,
To make the pilot’s history complete,
maybe a bus that isn’t yet invented –
May be a bus that’s long been obsolete;
And though he fly it but two lonely minutes –
To him it’s more important than the rest –
For ‘tis the bus he happens to be flying
The time the silly idiot Goes West!

Daddy Bernard continued flying in France and Germany – the occupation – for another year, with little to do but annoy civilians with mock strafes, and survive another crash or two.  He got 20 minutes flying a captured German Fokker, which was also written off in due course.  On 23 January, “Exit Buglanton – with full military honours! Burnt ” – perhaps Camel H794, which he flew on that sortie; on 31 July, “Axle snapped. Lucky escape from crashing.”; and on 11 August, “Pulsator glass burst – Exit my slacks.”    On 20 August he noted, “escorting Winston Churchill & Co over the Rhine”.  Over 29 August, he flew his Snipe Y back across the English Channel to Waddon.

We have: A slip from the Aircraft Salvage Depot in Waddon, Croydon: “‘Received by Air’ from 208 Squadron, Cologne, Snipe no E7848”, presumably flown in by Bernard.  “Left Y”, his log notes.  There was a wealth of affection for his “bus” in that brief annotation.

And there it ends.

The grandfather whom I never met survived the worst war the planet had ever known – survived just another decade before the Kenyan mosquitoes got him.  Leaving us a few sepia images of a cocky-looking fellow who loved animals and whose chin – my mother always said – looks like mine. 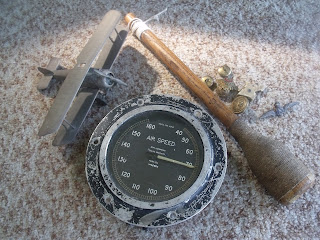 Posted by critical diaries at 11:14