No 5. – Animal suffering: denying the undeniable 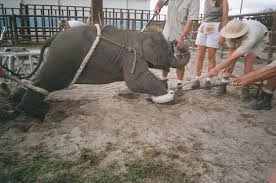 Within the last month, one step forward, two steps back.  Forward: Ian Michler’s new documentary Blood Lions appears set to make a major impact on canned lion-hunting – film having an effect where years of writing and activists’ legal nagging have failed.  Backwards: two court decisions.  One allows ‘local’ trade in rhino horn – a case brought to serve the commercial interests of a South African rancher.  Time will tell if this will actually help save the rhino.  Another: a judge reportedly decides that tying up baby elephants and beating them into submission, in a case brought by the NSCPA, does not qualify as cruelty.

All three instances reveal, at some level, certain humans’ profound lack of imaginative insight into the world of the animal itself.  There’s an assumption that because they are “animals” – that is, somehow in essence, en masse, different from “humans” – their mental and physical suffering need not be considered.  But this is a category mistake. For tens of thousands of years all the world’s animistic systems, long before the advent of the monotheistic religions, assumed that men and beasts had as many commonalities as differences: that is why eating animals was (and is) invested with spiritual significance, why one might magically but literally take on the power of a particular animal through imbibing it, wearing it, painting it, dancing it.  This sense of our being integral to animality, of being just one animal amongst many, has been echoed, oddly, by science: evolutionary and genetic biology conclusively establishes our common ancestry and features.  And, as Rupert Sheldrake has argued in his book The Science Delusion, there is a tonnage of experiential evidence of compassionate communion between humans and animals that shouldn’t be dismissed just because scientific models can’t measure it.

Yet both ancient and modern systems, spiritual and materialist, still deeply depend on animal incarceration, death and consumption.  The canned lion, rhino horn, and elephant-taming cases have another thing in common: the assumption that the animals are ultimately available for human commercial use.  Enshrined in finance is an assumption of fundamentally disrespectful superiority: in short, power.  We do it because we can.

I think that we hunt, sacrifice, tame, imprison, utilise, eat, love, fear and compulsively represent animals in the arts because we believe they make us what we are.  By categorising all others animals as animal, we become ‘human’.  We have become human on the back of animal suffering.

Not that we like to admit it.  A student of mine has just completed a fascinating Master’s thesis on meat-eating in South African fiction.  His observation: no South African writer – not even J M Coetzee in Elizabeth Costello – has written a novel so focussed on meat-consumption as, say, Annie Proulx in That Ol’ Ace in the Hole, or Ruth Ozeki in My Year of Meat.  While there seems scarcely a South African novel in which meat does not appear, the vast majority of references are incidental elements of verisimilitude, just part of the furniture of the depicted world.  Seldom remarked upon, described in detail, or ethically questioned, are the underpinning machineries of death, the massive industries of farming, breeding, transporting, slaughtering and packaging those once-breathing, complete, individual animals.

Yet the undertow of animal suffering is almost always there, in mere hints sometimes, but as unmistakable as molehills.

I’ve just read an early novel by South African-born Justin Cartwright, Freedom for the Wolves (1983).  Not one of his best, perhaps, but interesting for its animal presences.  The novel falls roughly into two halves.  In the first half, young Frank Thompson, a somewhat reluctant soldier, arrives in Zululand in 1879, at the sputtering end of the Anglo-Zulu War; he is involved in the ignominious capture of King Cetewayo, then in the unseating of Pedi king Sekukuni, finally in gold-mining on the Reef, making enough to establish a couple of farms.  In the second half, his grandson James, having spent a long period in England, returns to South Africa in 1959 and tries, rather haplessly, to get one of the farms going again.  (In this aspect, James Thompson is a prototype for the character of James Kronk in Cartwright’s later novel, White Lightning.)

So although the novel is not overtly about animals, they are nevertheless there.

There is, firstly, lots of meat-eating, described in culturally different contexts.  There are “tons of tinned beef”; “wild duck, guinea fowl, boiled beef, roast lamb”; “roasting meat on the fires”; “pies, made with god-knows-what bits of leftover beef and kidney”; and many more examples, unremarkable yet vital.  Because Thompson is intrigued by indigenous culture, even as he is aiding in its destruction, he often remarks on Zulu or Swazi attitudes towards cattle, and their occasional, highly ritualised eating of them.  In one of a few such instances, he looks down at a slaughter scene:

In a small kraal six or seven warriors helped an old man marshall some animals.  Slowly he walked around them and then lunged forward with a spear and buried it beneath the shoulder of an animal, which at this distance seemed barely to react.  It walked on and then stumbled once before sinking mutely to the ground.  Immediately two of the assistants began to skin it while the old man walked calmly after the surviving cattle until he had one cornered; he lunged again, deftly. The cattle seemed to accept the inevitable with resignation...

In parallel, the machinery of imperial invasion is carried by animals, “thousands upon thousands of oxen and horses, covering the hills and valleys” – almost all surely destined for some violent demise.  In this animal mass, in Frank Thompson’s view, the “logical imperative [of] materialism”, its drive to “impose some order and solidity and above all meaning on this vast continent of impermanence”, is made manifest.

Sandra Swart, professor of history at Stellenbosch University, has shown in her wonderful book, Riding High, that the history of the country would not have unfolded as it did without the horse: for two centuries, the horse bore the burdens of the wars and of peacetime transport and communication alike.  Wolves is suitably replete with references to horses, mounted by soldiers, pulling wagons, and suffering terrible casualties.  And Frank develops only one companionable relationship with an animal, ‘his’ horse Khelim, who survives all the battles and diseases and lives to old age.  He is “not so much a horse as a beacon”, a slightly rebellious and “homespun” animal, reflecting the values of his owner.

Contrasting this rather casual affection Frank, amidst the wreckage of a kraal on his farm – the people had been “moved on” –  encounters an emaciated “feral” dog.  He chooses to shoot it.  Whether this is cruel or merciful is unclear, even to Frank; and he subsequently regrets the act, not so much for the dog’s sake, but because “Africa could never be tidied away”.  So the shot dog is also symbolic of the ambivalent but apparently inevitable progression of the ”magnificent Leviathan” of European development.   (The incident foreshadows Kronk’s killing of the baboon Piet in White Lightning, where human-animal relations are a bit more consciously worked through.)

The dog-shooting incident is echoed later in the novel, when grandson James, decades later, remarks on the “mortality rate” of dogs run down on Johannesburg’s township roads.  The relationship between animals and human technology has also changed radically, in some ways enabling us to distance ourselves even further from animal suffering.

Increasingly through the novel, wild animals –  lion and elephant, monkeys and baboons – are encountered only tangentially, or by hearsay; at the end, James Thompson tries ineffectually to farm impala and blesbok – the wild herds reduced to mere commercial counters.  This also goes for African medicines in a city market: “birds, crocodiles, aardvarks, servals, genets, turtles, bats ... horns, hooves, dried skins” – the desiccated remnants of multiple killings of inevitably terrified animals.
There are also passing mentions of many other forms of animal exploitation, from the leopard skins worn by Zulus and Swazis, to the “calf-skin” boots worn by a gentleman back in England.  Leather everywhere.  Finally, there are numerous instances of animal descriptors or metaphors: General Redvers Buller looks “as benign as some prodigious farm animal”; a lady is “gazelle-like”.  Pallid reminders that we are animal.

This is to cull just a few examples from a single novel.  So much more to explore!  I guess the question for me is this: how much longer can we go on ignoring our animal dependencies and interdependencies, whether in our literary productions or in our real lives?  Is there any good reason why we should ignore them?

Posted by critical diaries at 19:22