No.7 – The Bushman, the hyena and the poet 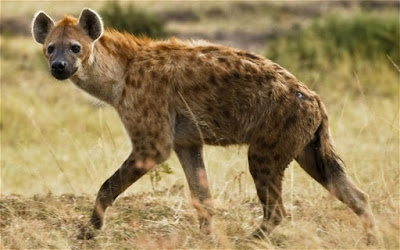 I am always advising my students, when they get lost in the entanglements of complex research projects, to try to capture what they’re after in a couple of pages.  What’s the primary research question?  What’s the necessary primary and secondary material?  What’s the approach?  What are the main lines of argument?  To what basic conclusion?

Now that I’m enmeshed in trying to write a paper that has grown too big and ragged for its own good, and I need to lay out its essentials for myself again, I thought this might be a good place to do it.  Then some kind-hearted and perceptive reader might be able to tell me where it’s gone wrong – or that I’m simply crazy.

The subject combines two things I’ve touched on in previous posts: Bushmen and animals.  The brief of the paper is to explore links between what is becoming known as Human-Animal Studies and ‘indigenous knowledges’.  Since I’ve been picking at aspects of Bushman ecologies and modern poetry for a few years now, it seemed natural to try to take this a bit further, and to work with a tightly-contained ‘case study’ to anchor the bigger question.

The broad question I take to be this: What can ‘we moderns’ learn about human-animal relations from an indigenous (or pre-colonial) culture?   The case-study question that follows is:  What can we learn about human-animal relations from modern transcriptions of /Xam Bushman testimonies – such as Alan James’s poetic versions of //Kabbo’s testimonies?

A bit of the necessary background.  In the 1870s the linguist Wilhelm Bleek was able to record our largest collection of ‘Bushman’ testimonies (more precisely, /Xam from the Northern Cape): legends, tales, songs, incantations, recollections, laments of a society already on the brink of vanishing beneath the onslaught of European farmers and commandos. (The whole Bleek-Lloyd Archive is accessible online.)  This treasure-trove has proved irresistible poetic material for a number of white poets – Jack Cope, Stephen Watson, Antjie Krog – seeking belatedly to valorise this vanished people.  Because no one can speak /Xam any more, these poets have had to upgrade and edit Bleek’s laborious original translations into modernised, readable versions.  So I want to focus just on Alan James’s versions of the animal stories of the most accomplished of Bleek’s informants, //Kabbo, in his book The First Bushman’s Path.  I’m hoping that this case will exemplify, in a slightly heightened form, a set of issues that bedevils all efforts to answer this kind of question.  There are at least four inter-related problems. 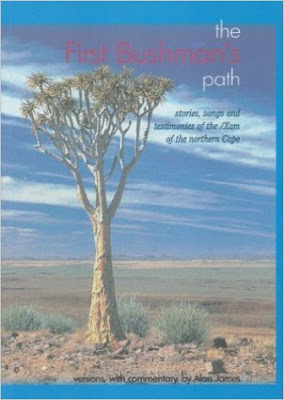 The first problem is that we don’t even have a clear idea of who the ‘Bushmen’ (or San, or Khoisan) were or are; an historian colleague has suggested to me that the term is so imprecise it should be done away with completely.  We know very little about the /Xam or their ‘original’ lifestyle, and it’s only with extreme caution that we can transfer impressions from other extant ‘Bushman’ groups.  And we don’t know much about //Kabbo.

A second, closely related problem is that we have only a sketchy notion of what pre-colonial societies did and believed; we extrapolate backwards from present-day groups, but how modified have they become over the decades?  Even in the 1870s //Kabbo and the /Xam had already become deeply dislocated by, and implicated in, the invasion of the ‘modern’.  We have never seen ‘indigenous knowledge’ other than through the modern eye, pure or original or unmodified.  ‘Indigenous knowledge’ has become a text – even, perhaps, for many indigenous peoples.

What we know of /Xam beliefs about animals is confined to Bleek’s texts.  He and Lucy Lloyd were inventing an orthography for /Xam as they went along, translating as best they could, often twice, first from the Dutch that //Kabbo knew (how well?), then into Bleek’s archaic English (how well?).  Then we have Alan James modifying those texts yet again into self-conscious ‘poems’, which they were not originally.  So the third problem is how far we can take these multiple ‘layers’ as giving us access to anything like an ‘original’.

The fourth issue has to do with our approach, our underlying motive for asking the question in the first place.  Isn’t this because ‘we’ academics tend to think of ourselves as ‘Westerners’, meaning we belong (even when we dissent) to a culture that’s essentially rational, scientific, foreign, supremacist, capitalistic, globalising, and ecologically destructive?  Hence, in looking shame-facedly about for a gentler, rooted, organic alternative, we are predisposed to extract from ‘indigenous’ societies what we need in order to critique ourselves.  If the Bushman did not exist, we would have to invent him, the way Michel de Montaigne invented the noble ‘cannibal’, back in 1580, with the same purpose.  Indeed, anthropologist Ed Wilmsen argues that we – and the whole problematic, imperial enterprise of anthropology as a discipline – have invented ‘the Bushman’.

Maybe one can make too much of these problems.  Maybe, even through the cryptic veils of rock art, even through the attenuated poems of Alan James, we can be fairly sure about some things.  The/Xam hunted animals selectively and lived frugally; they told complex stories about their hunts and myths about human-animal origins; their shamans believed they could ‘channel’ animal powers and beings; their relations were in some degree egalitarian and spiritual.  They certainly did not wipe animals out with firearms for sport, eliminate wildlife in favour of domesticated stock, and slaughter that stock by the millions for food.  We can admit all this without necessarily romanticising the Bushman, as Laurens van der Post did.  This is to emphasise and utilise the ‘Bushman’s difference from ourselves.

One thing is clear: we cannot go back to pre-colonial Bushman life – even if we could understand exactly what that was.  Even what remains of the Bushmen can’t really go back to ‘Bushman life’.  We will never relate to animals in quite the same way again.  But maybe we can find some cross-cultural similarities, some common ground in ‘the West’s own animal mythologies, in a persistent strand of anti-rational Western philosophy running from Berkeley to Merleau-Ponty.  Or, most attractively, a strong school of thought that is now revitalising concepts of “animism”, not (only) looking to ancient myth, but trying to re-sacralise human-animal relations within our modern world.  Much as Alan James is doing poetically with the Bleek-Lloyd material.  And this is to emphasise the Bushman’s commonality with us.

Can one balance difference and commonality?  Maybe, through this animist lens, we can view James’s modern poems, not as representative of some fixed historical /Xam moment, but as aesthetic objects in themselves, with whatever ethical import they can be seen to carry.  Like any work of literary art, the poem carries the traces and burdens and richness of its verbal pasts, but in transmogrified form – the way Shakespeare’s plays modified and recharged his sources in Plutarch, or Derek Walcott’s epic poem Omeros reconfigured Homer’s Odyssey for the Caribbean milieu.  All stories are stories, as //Kabbo himself put it, that float in on the wind, and away again, belonging to no one.

Hmm, that does feel a little clearer...

Oh, conclusions?  Though study of Bushmen-as-different might give us a lever with which to critique modern eco-destructiveness, and though a recharged animism might bring Bushmen closer to us in common humanity, what we might usefully learn about human-animal relations is probably quite limited.  An attitude of greater respect?  Perhaps.  But are we going to believe in Bushman myths and shamanistic shape-shifting?  Or go out and actually live a hunter-gatherer life?  Very, very unlikely.  We can be certain, I think, that Bushman attitudes had nothing whatsoever to do with conservation, animal rights, or extensive domestication – the three major modes into which modernity has thrust our animal relations.  For most of us, and for most animals, the ‘Bushman way’ must remain an unreachable fantasy, and a literary construct – but, like a lot of fantasy, it is good to think with.

Anyway, here is an extract from Alan James’s poem, derived from //Kabbo, entitled “The hyena fears the fire”.  Make of it what you will.

hyenas eat meat that is raw,
and they eat ostrich eggs that are raw, that are cold,

they all eat things that are raw
for they keep no fire, they fear the fire, they run from fire,

for they remember how the hyena mother once burned her feet
when she stood on the coals of a fire at the Dawn Heart’s house:

for she had feared his assegai (//Kabbo explained) 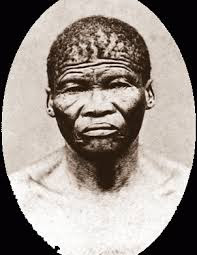 Posted by critical diaries at 22:38