No.9 - Music in Blake, Blake in music 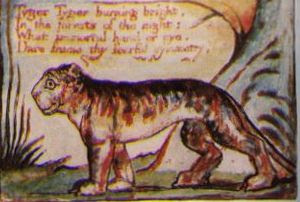 I’ve been re-reading a lot of that strange and manic Romantic poet, William Blake.  Almost completely isolated in his own lifetime, his presence in modern culture is incalculable.  Witness an episode of crime series The Mentalist I caught on TV the other night, in which some grubby bunch of miscreants used “Tiger tiger” as a password (one of them careful to explain to viewers that it was from Blake’s poem, quoting: “Tyger tyger burning bright/ In the forests of the night”).

As it happens, I’ve been re-reading Blake to keep up with a student who is finishing a thesis on the animals in Blake’s poetry.  Astonishingly, despite a vast amount of scholarship on Blake, no one seems yet to have published a comprehensive study of how he uses images of lambs and tigers, lions and wolves, eagles and horses and foxes and worms.

All the best “doors of perception” (Blake’s phrase) open by sheer accident, I think – and it just so happened that I was also trawling through some long-neglected CDs, and put on John Tavener’s  Ikon of Light.  Amongst the very beautiful choral works on it are his renditions of “The Lamb” and “The Tyger”, two of Blake’s Songs of Innocence and Experience, written in 1794.

Maybe too beautiful.  “The Lamb” is suitably rhythmical and repetitive, but it seems to me that the elevated refinement of Tavener’s composition entirely misses the ferocity and roughness of “The Tyger”:

What immortal hand or eye
Could frame thy fearful symmetry?
....
And what shoulder, & what art,
Could twist the sinews of thy heart?
And when thy heart began to beat,
What dread hand?  & what dread feet?

The whole poem is a series of these questions, never answered.  If I were to hazard my own reply, though, it’s that Blake can’t imagine that the conventional, cloudy, loving God of the Established Church could have created this monstrous beauty.  His conclusion: the God of the Church was a fraud, a “Nobodaddy” as he punningly called him.  Blake put his faith in the fiery energy of the independent “poetic genius”, symbolised by the untameable tiger.  By comparison, then – and Blake does intend us to compare them – the Christ-like gentle Lamb seems just self-deluded.

So it felt inappropriate to find “The Tyger” sucked into the airy folds of Tavener’s near-mystical church music.  Just as it’s inappropriate to find Blake’s poem “Jerusalem” sung in conventional church services. What began as an acerbic attack on industrialising English nationalism – the “dark Satanic mills” – was a century later amended, just enough to smooth away offence, and suborned to Blake’s most derided opponent – institutionalised religion.

Blake is recorded as having sung his own Songs in company – rather well apparently.  In pubs, too, one imagines.  His earliest poetic references to music occur in The Island in the Moon, a shaggy and silly satirical kind of play, set in a tavern, in which characters named Suction, Quid, Sipsop and Aradobo raucously carouse.  Suction yells for “an Anthem, an Anthem”, and gets:

And there’s a lot more of this inebriated nonsense.

But when we get to the more mature and refined Songs and “The Little Vagabond”, the orphan finds the “Ale-house is healthy & pleasant & warm” compared to the “cold” church.  He wishes the Parson would just lighten up a little.  In contrast, the church depicted in “Holy Thursday” herds the children into “companies” that seem to “raise to heaven the voice of song”, but in reality are, as in the accompanying illustration, regimented as a Byzantine frieze. 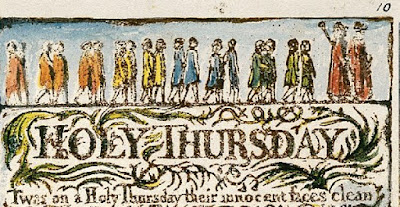 So in several of the other Songs, what seem to be superficial, innocently child-like lullabies (like “Cradle Song”) begin to seem suffocating and even slightly sinister.  In fact, several Songs are satirical rewrites of hymns by Isaac Watts and John Wesley (several of which still find a place in the Anglican hymnals).  And in his depiction of the “horrid labours” of industrialisation in the long poem Milton, Blake writes of music being used to lull the workers, “thousands play on instruments/ Stringed or fluted to ameliorate the sorrows of slavery.”  Precursor of the modern mall?

But there are other kinds of music that liberate.  Blake’s Muses are often musical.  The opening poem of Songs of Innocence has a piper, piping away “so that every child might hear”; and the poem Europe has a slightly “tipsie” Fairy singing to a “soft lute”, readying the speaker for his task.  The Songs are full of children singing with their freedoms, almost always out of doors.  They are in tune with a Nature that also sings perpetually.  Birds particularly – the nightingale, for example, leading “the Choir of day! trill trill trill trill/ Mounting upon the wings of light into the Great Expanse” – but even the gorgeous Flies

that dance & sport in summer
Upon the sunny brooks &meadows; every one the dance
Knows in its intricate mazes of delight artful to weave:
each one to sound his instruments of music in the dance...

And in Blake’s vision of ultimate spirituality, the very constellations

in the deep & wondrous Night
They rise in order and continue their immortal courses
Upon the mountains & in vales with harp & heavenly song
With flute & clarion ...

Over time, Blake’s poems got wilder and more voluminous, his rhythms less obviously musical.  But his earlier poems have been performed by an astonishing number of artists, from Benjamin Britten to Patti Smith.  Here are just three for your delectation.

Also interesting are arrangements by Belgian composer Lucien Posman and the Goeyvaerts Consort.  Like Tavener, this is choral work – or very rich a cappella – but the performances, rather than being smoothed out into a kind of mysticism, are charged with Blake’s own turbulence.  And you can make out the words!  The Consort performs several of the Songs of Innocence and Experience – “The Clod & the Pebble”, “Little Girl Lost”, “The Little Vagabond”, “The Poison Tree”, among them, though neither “The Lamb” nor “The Tyger”.  Best of all, perhaps, is the longer “Song of Los”, in which Blake was breaking out into his stranger “prophetic” poetry; Posman’s score is masterfully matched to the poem’s turmoil of tone and meaning.

But maybe my favourite of all those I’ve found is Blake as Appalachian Blues, unlikely but wonderful, performed by Martha Redbone on her new album of 12 Blake poems, The Garden of Love.  “The Garden of Love” itself, one of Blake’s bitterest attacks on the Church, is suitably harshly rendered, others equally appropriately mellow.

I think Blake would have been delighted. 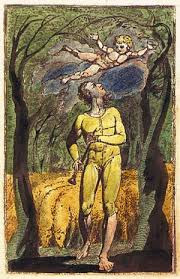 Posted by critical diaries at 21:46