No.4 - Butterflies, climate change and the imagination 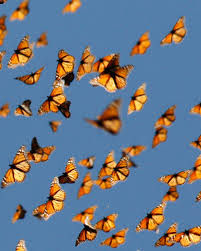 Two events are under way this week which direct my errant thoughts towards climate change.  The first is COP21, opening in bomb-shocked Paris, hoping at last to make progress towards globally-binding agreements to limit toxic emissions and mitigate their impacts.  World leaders have flocked there, as well as protesters and lobbyists in unprecedented numbers, like migrating butterflies.

Gradually, the world is recognising that the ecological crisis is the crisis of our times.  It will dwarf all bombs.

On the other side of the planet, real butterflies – Monarchs – are migrating a thousand miles across the United States to their wintering grounds in Mexico.  Insects can be especially sensitive and measurable indicators of anthropogenic damage: they suffer visibly from the zillion apparently small but fatal human decisions that together build up into “climate change” – a phenomenon which otherwise can seem too nebulous to be observed, understood, or even believed.   It’s all in the detail.  Monarch butterflies have declined in number from around a billion in 1995 to 35 million last year. This is mostly due to pesticides and food- and habitat-loss (farmers slashing vital milkweed as ‘weeds’, for instance), but also to subtler disruptive changes in temperature, season, and weather.

I’m not, in retrospect, surprised at this decline.  A decade or so ago, on a farm near San Diego in southern California (also a Monarch migration destination), I was dismayed at night to hear not a single chirrup of cricket, see not a single moth at the lights.   Insects had been wiped out, and it felt desolate.  Compare that to the late afternoon scene before me as I write: cicadas laying down a seamless skirl of sound; diaphanous clouds of midges above the flowering trees; bees burring amongst the red-hot-poker blossoms; locally-migrant Cabbage-white butterflies – all pollinating an interdependent complex of vegetation, and in their turn providing supper for a whirling circus of drongos and swallows and swifts, not to mention spiders, geckoes and chameleons.  If only it were still so fecund everywhere.

On the positive side, the state of Texas is reportedly spending $4 million to restore Monarch habitat such as eucalyptus trees, and on its side Mexico is distributing fertilisers to similar ends.  Restoring vegetation complexes can also only be good for carbon sequestration and soil-creation. (You can read more on a devoted website, www.monarch-butterfly.com .)

The Monarch butterfly crisis has generated at least one recent novel, one of perhaps hundreds that have recognised climate change as an interesting, legitimate, perhaps even inescapable theme.  This is Barbara Kingsolver’s most recent fiction, Flight Behaviour (2012), set in Tennessee, which imagines a Monarch migration thrown awry by climate change.  Kingsolver, Orange Prize-winning novelist and essayist, often brings her training as a biologist to bear on her stories.  She can include passages of intricate detail, such as this:

She walked closer so she could see this as her son was seeing it.  She hadn’t examined the clumps at close range, and even now it was hard to understand how they were constructed.  The butterflies didn’t seem smashed or stuck to the wings of other butterflies, not like a hundred-car pileup, it was nothing as simple.  They seemed to be holding on by their needle-thin front legs to some part of the tree itself, bark or branch or needle, out to the very tips.  The tree’s basic shape was still visible underneath, the column of trunk and broomlike sweep of the branches, but all enlarged and exaggerated by the hangers-on.  Only at the ends of the dangling clusters  did butterflies seem to be clinging to the legs of other butterflies.  The insecure and the desperate, she thought.  No world can be without them.

This unpretentious but intimate description lifts at the end into an almost existential statement: the protagonist, Dellarobia, and perhaps a goodly segment of humanity generally, is also insecure and desperate.  It’s hard to write about climate change without sounding didactic or hectoring, but Kingsolver’s scientific knowledge is deftly embedded in Dellarobia’s story of disaffected marriage and love, and within a portrayal of her richly imagined community of colourful and conflicted humans.

This is the purpose and power of fiction, of course: we learn about the butterfly phenomenon along with the initially uninformed Dellarobia.  We are, like her, sucked in to gradual understanding.  In an essay entitled “Jabberwocky”, from her volume High Tide in Tucson (1995), Kingsolver writes:

A novel works its magic by putting a reader inside another person’s life.  The pace is as slow as life.  It’s as detailed as life.  It requires you, the reader, to fill in an outline of words with vivid pictures drawn subconsciously from your own life ... Art is the antidote that can call us back from the edge of numbness, restoring the ability to feel for another.

Writers, I discover, have been writing about climate (not to mention the pervasive presence of weather) for a century, at least since Jules Verne wrote The Purchase of the North Pole in 1889.  He helped pioneer science-fiction –  the ‘sci-fi’ genre which is evolving into a new buzz-genre, ‘cli-fi’, which works with the current definitions of ‘climate change’.  Prominent amongst these fictions are so-called ‘speculative fictions’ – stories projecting current trends and technologies realistically into the future.  Such novels range from J G Ballard’s The Drowned World (1962) to Margaret Atwood’s The Year of the Flood (2009), from Ian McEwan’s Solar (2010) to Kim Stanley Robinson’s Forty Signs of Rain (2005).

Forty Signs is the first in Robinson’s “Science in the Capital” trilogy.  The novels follow the trajectories of scientists and policy-wonks in Washington DC as they try to cope with a massive shift in ocean currents, unprecedented winters and deluges of stormwater (East Coast Americans are already experiencing these).  He can be a tad ponderous, but he writes accessibly, and his science is solid.  He packages the material in ways more persuasive and affecting than scientists’ computer-model projections of where current climate trends might lead us.  Those projections are, in their way, also fictional.

The future, by definition, is a matter of the imagination.

Robinson forms part of a study of climate change in fantasy fiction being pursued by one of our Master’s students.  He’s also exploring Frank Herbert’s Dune (for its depictions of dry-land ecology, certainly a present reality and threat for many regions) and George R R Martin’s Game of Thrones (for the ways in which that imagined society deals with the effects of a threatened mega-winter).  I can’t say I’ve enjoyed the writing in either of these two works – I’ve not found a single sentence in Game of Thrones I’d relish reading twice – but my student has persuaded me there’s some interesting and complex political thinking concerning climate going on.  And Martin’s less well-known book, Tuf Voyaging, reveals his very clear concern with ecological matters.

To return to South Africa: butterflies also feature in a local speculative novel, Jane Rosenthal’s Souvenir (2004).  The protagonist Souvenir (Souvie) is a clone-woman whose job is to float about the interior desert of the Karoo region in a hot-air balloon, servicing windmills.  She falls in with a roaming Nigerian lepidopterist, whose subject of study – non-cloned butterflies – are survivors of human intervention.  The novel maybe tries too hard, incorporating everything from cloning to a tsunami, but it’s an adventurous foray in a genre still rather tentative in local writing.

But South African and African sci-fi, if not cli-fi, is starting to take off.  Look out for the butterfly effect.

Posted by critical diaries at 16:57