No 15: Zimbabwe Despatches: A poetical evening with John Eppel 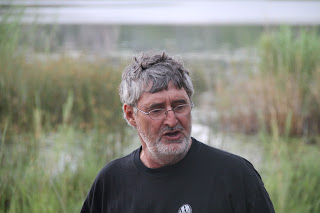 John Eppel’s garden in Bulawayo is looking devastated.  This evening is the first time in months that even a sniff of rain has clouded the sky; even in winter I don’t remember being able to see through his usually riotous shrubbery into neighbours’ properties.  The russet dust and siftings of yellow grass don’t deter Bismarck, the Border collie, who as always immediately presents a tooth-marked ball for throwing, as if I’ve been doing it for him all my life.  Ivan the unridged Ridgeback-Dachshund cross bounces about, apparently in a constant state of irrepressible confusion.

John is his usual, welcoming, tall, slightly grizzled, humorous self.  “Make this your home,” and he gives me a key to the cottage, newly ceilinged with some glittery Chinese pseudo-tiles, oddly out of character with the dishevelled rural-farm feel of the rest of the place.  He reminds me that that the lock of the house door is upside-down – that he has never tried to fix this anomaly is perhaps indicative of his slightly contrarian character and writing.

He offers me fruit-juice, cracks open another can of beer for himself.  “I’ve already started,” he says, half apologetic, half boastful; “I’m a functional alky!  I’ll cut back when school starts – which is tomorrow”.  He does carry an air of slightly fuzzy, introverted loneliness; his post-marital solitude, at least, gives him quite a bit of time to write.  And he has been turning it out, all right: Textures, a volume of poems shared with Togara Muzenanhamo (published by Bulawayo’s AmaBooks, one of the few in the country still publishing so-called ‘creative’ work); the novella Absent: The English Teacher, both drawing on and satirising his real-life job and place); and most recently another novella, Traffickings (published by adventurous new outfit, InkSword in Kimberley, who will soon be bringing out yet another, The Boy who Loved Camping).

I’ve just finished Traffickings, which John thinks his best, or at least most uninhibited novella yet.  Where his earlier works, from D G G Berry’s Great North Road to The Curse of the Ripe Tomato, focussed on satirising his own postneocolonial white Rhodimbabwean society, in Traffickings “everyone gets it,” he chuckles – Marxist neoliberal whites, government officials, conservationists, NGOs, poets, the lot.  A brave, perhaps reckless little book.  I have to say John’s peculiar sense of humour, laced with schoolboyish ribaldry and obvious gross puns, doesn’t appeal to my taste particularly, for all that I admire the lancing accuracy with which he probes the nation’s many societal boils.  Perhaps because he’d primed me last year to expect a prison story, I found the book a bit unbalanced – much diversionary humour about the collapse of the protagonist’s hotel, Nehanda Hollows, in the first part, and then rather too short a section on how Khami prison becomes a tourist resort, potentially the more interesting venue, in the second.  It’s all just a little too self-consciously satirical, almost allegorical, doesn’t quite play along the edge of compassion as, say, Jane Smiley does in Moo (see my Blog.11).  Not that one necessarily expects a satirist to be compassionate, I suppose.  And now he says to me, “Did you pick up the allusions to The Great Gatsby?  It’s full of them.”  I hadn’t, shamefully, though there are plenty of other allusions: John’s work is always something of a literary education; he can’t keep the teacher in him quiet. 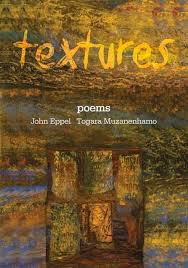 I have always preferred his poetry, which I count as amongst the finest Zimbabwe has produced: varied in mood, rich in references, often touching, always supremely crafted.  He talks about people saying he is “reactionary” because he writes in Euro-derived “forms” – sonnets, villanelles, Keatsian stanzas and the like – “But I say to them it’s fucking hard to write sonnets, it’s hard.  And I say you find the greatest freedom working within the set format.  Form is content – something that’s missing from so much so-called free verse these days.  You might as well write prose.  I can’t really write free verse, it just starts to sprawl, it’s harder for the poem to find itself.”

We discuss Togara Muzanenhamo, Carcanet-published whizz-kid, and his cerebral, shape-on-the-page formats – but that’s not really “form”, in John’s view, because it’s not organically tied to content.  Thomas Hardy is one of his poetic models here, as Dickens and Rabelais are for his fiction – though in my head I align John as much with the scatological side of Swift, or the raunchy, teeming cartoons of Gillray.  Most recently, John has found a way of reaching a different audience, accompanying wonderful landscape photographs by André van Rooyen on a Matopos calendar – unlike most poetry, whose production involves the poet in financial loss, sales from the first calendar earned John enough to buy himself a new car!

Over supper – his characteristic one-pot stew, as rich and tasty as one of his poems – John  regales me with stories of institutional backbiting and rejection.  Here a certain poet made overtures, then spurned him because he (the poet) was ‘left-wing’ and John had just been published by a ‘right-wing’ press; there an editor encouraged submissions then rejected them; here a publisher failed to have John’s book ready for a launch and launched his own instead.  These are his “enemies” now – he ticks them off on his fingers –  and he seems to me to take a certain pleasure in delineating these antagonisms; it confirms his marginal, maverick status.  He claims to be neglected, but he can tell plenty of stories of being invited to this or that festival or interview – more than many of us, I’d say.  And he took deep umbrage when David McDermott Hughes accused him, in his book Whiteness in Zimbabwe, of “fetishising crocuses”, apparently immune to John’s sharply self-aware ironies.

“But I don’t hold grudges,” he says.  “They haven’t left your mind, either,” I chide, laughing.  “Oh, but that doesn’t count, they’ve got to be down on paper!”  He claims to be hated also by the nationalist-orientated establishment at the University of Zimbabwe, with some justice – though he got a glowing recommendation from older stalwart Kizito Muchemwa for Traffickings.  And some younger black academics, less trapped in outmoded racialistic rhetorics and inhibitions, are paying him more attention (I’ve had more than one Zimbabwean PhD student approach me for input on John’s work).  He’s pleased about that, even as he grumbles about their occasional misreadings.

After pecan-nut pies and coffee, it’s to bed with us.  I am weary after a long day’s drive, he will have to be up at the crack of dawn to get to school, accompanied by the dry ratchet sounds of the Crested barbets – a drought bird if ever there was one.  Appropriately, the poem the January 2016 page, closing last year’s Matopos calendar, is entitled “Our Last Hot Spell”: 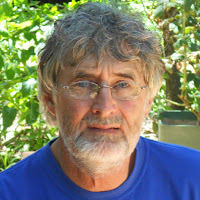 ... Memories turn
like falling leaves, to smoulder and burn.
This is our last hot spell for, let me see,
a moment, three seasons, and eternity.

Posted by critical diaries at 14:07